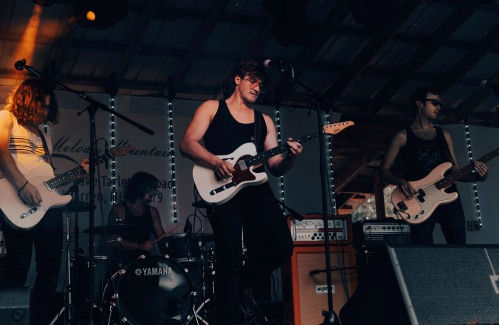 When a venue does not ask the public to pay for a ticket, it may take some risk.

It is the spirit that guides what is becoming an annual tradition, the Nexus Festival of the Opera of Lebanon, three days of music and arts that begin on Friday.

“The benefit of a free festival is that you’re not dependent on ticket sales,” Joe Clifford, the opera’s executive director, said in an interview. “These are artists who should be in the Upper Valley,” but who might not generate ticket sales if they performed at the opera for a standalone show. The festival allows music fans to take a flyer.

“I think that’s part of the fun,” Clifford said.

The star this year is soul, rock and blues singer Bette Smith, who performs at 8 Friday nights on the main stage behind the opera house.

“There’s something about her that just screams ‘rock star,'” Clifford said. She was the most difficult artist to sign, Clifford said. For Nexus, he targets a sweet spot: musicians or artists who have the wind in their sails, but who are not yet famous.

Although they’ve been playing music together since 2015, Shy Husky has lived up to his name, fielding relatively few gigs, said bassist Jeff Meyer-Lorentson of Lebanon. COVID-19 didn’t help.

“Before the pandemic, we were probably doing two or three shows a year,” Meyer-Lorentson, 29, said.

Meyer-Lorentson partnered with Leo Charuhas, guitar; Spencer Bladyka, guitar and lead vocals; and drummer Hayden Dow shortly after moving to the Upper Valley from the Burlington area in 2015.

They appropriate a wide range of musical influences, but have molded themselves into a unit that fits the alt- or indie-rock label, playing songs that are melodic, but also tough.

Their Nexus set will be almost entirely made up of original hardware. Bladyka and Charuhas bring their songwriting ideas to the group and they work on it as a unit, Meyer-Lorentson said.

When Shy Husky started playing live shows again last year, they ran into a familiar problem: there aren’t many local venues that suit their preferred sound and volume. They do well in outdoor venues or the great outdoors, playing Melody Mountain, Warren, NH, last summer, and the Windsor Exchange two weekends ago.

“We’re not quite the right fit for Salt Hill,” Meyer-Lorentson said.

In addition to scouting locations, the group also plans to enter a studio soon. “We have some material that we’re really happy with,” Meyer-Lorentson said.

Like most Upper Valley bands, they try to take their music as far as they can while still maintaining their day job.

Their set is tucked into a rock-heavy Sunday schedule, featuring Jocelyn and Chris, a brother-sister rock duo from upstate New York, and Fast Times, an ’80s tribute band.

Overall, though, the Nexus Fest is hard to pin down, and that’s by design. The HillBenders will bring their WhoGrass project to the festival on Friday – that’s right, a bluegrass band playing The Who classics. Singer-songwriter Senie Hunt, who will perform on Saturday, is from Sierra Leone.

The entire Saturday lineup is made up of global sounds, from all-female pan-South American band LADAMA to Battle of Santiago, which mixes Afro-Cuban music with Toronto post-rock.

Clifford is particularly excited about Sewam American Indian Dance, a troupe he had lined up to perform at the opera in 2020 before the pandemic put it on hold. The group of dancers will perform on Saturday, but will be in residence at the festival, leading workshops on Saturday and Sunday.

This year’s festival includes a busker stage on the Lebanon Mall, in addition to two performance stages, one in Colburn Park and the other behind the opera house. And there will be other art activities organized by AVA Gallery and Art Center.

The festival’s roughly $70,000 budget is funded by grants, sponsorships and donations, Clifford said. The best way to verify this is to simply show up and listen, he said.