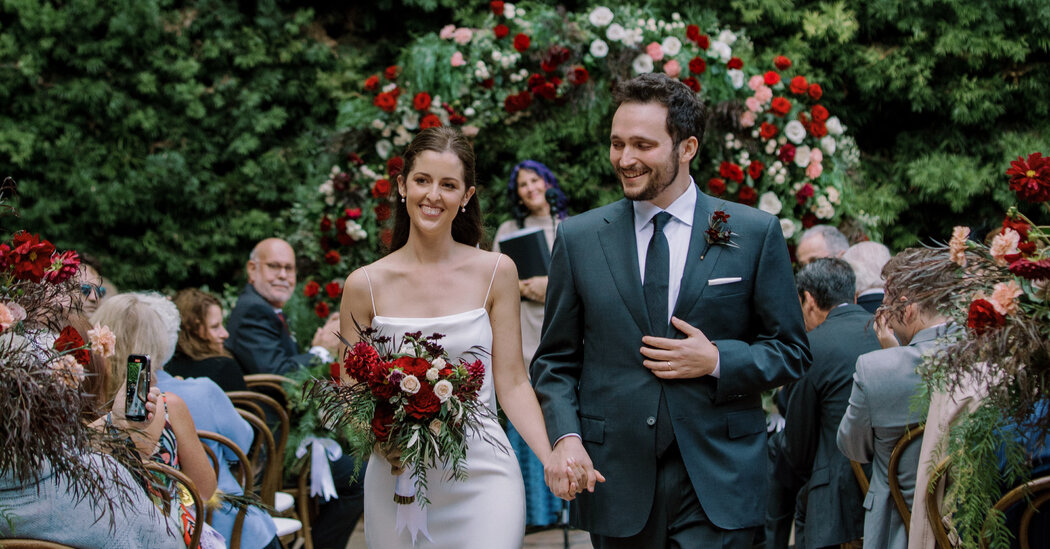 Adam Dalva said he fell in love with Alana Salguero the first day he met her during his freshman year at Swarthmore College in 2004. He would later write his wedding vows the night after their first date.

But that date didn’t come until more than a decade later.

“I immediately fell in love with Alana,” said Mr. Dalva. He enrolled in a Russian literature class in Swarthmore because Ms Salguero mentioned that she was interested in it, then joined the Tango club because she was a member.

Although Ms Salguero, 35, considered Mr Dalva, 35, to be a close friend this first half of the year, there was no feeling of love on his side. â€œI immediately found a soul mate in him and really loved him as a friend,â€ she said.

That winter, she refused Mr. Dalva when he declared his love for her. The couple didn’t speak to each other again until their freshman year, when they both coincidentally signed up to study abroad in Italy.

There, a timid friendship was rekindled. It only got deeper and more stable when each moved to New York after graduating in 2008.

The couple met often as friends over the next 10 years. Although they both dated other people during this time, Mr. Dalva was unable to shake off his unrequited feelings for Ms. Salguero.

Her tenacity ultimately made a difference for her. In shock over a breakup, the death of a beloved pet and the stress of moving into a new apartment, Mr Dalva’s concern and sincere care for her, Ms Salguero said, have leads to “emotional change”. In April 2018, she agreed to a date.

A native of New York, Mr. Dalva graduated in English Literature and received an MFA in 2013 from NYU. He is currently a book editor for “Words Without Borders” magazine, as well as a professor of creative writing at Rutgers. University and freelance writer.

Ms Salguero realized she was in love with Mr Dalva while they were on a trip to Scotland in September 2018.

â€œThe second I told her I loved her, I knew we were getting married,â€ she said.

The following month the two moved in together and the following year they got engaged. Mr. Dalva proposed to Ms. Salguero on May 20, 2019 at their shared home in Brooklyn.

The couple tied the knot on Oct. 31 in an outdoor ceremony at Franciscan Gardens in San Juan Capistrano, Calif., In front of 85 guests. Victoria Gottlieb, a friend of Mr. Dalva’s graduate school, officiated after being ordained by the U.S. marriage ministries for the event. Then, the participants enjoyed a cocktail on the theme of the Venetian masquerade.

The ceremony and cocktail were part of a three-day wedding celebration. The day before, there was a dinner followed by a bonfire at Corona del Mar State Beach. And the next day, an English tea party took place at the Tea House On Los Rios. Those present were vaccinated and staff wore masks.

After a three-day honeymoon in Palm Springs, California, the couple returned to New York City.

“I have a feeling that moving forward will be more of what we did before,” said Ms Salguero. â€œWe play, we have fun and that’s what we’re going to do in the future. “