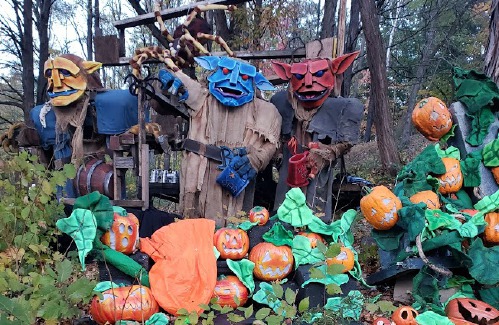 TURNERS FALLS – After two decades of outdoor performances, Jonathan Chappell, teacher at Turners Falls High School and owner of the Skeleton Crew Theater, is bringing his unique group of giant puppets to the Shea Theater Arts Center from October 28-30.

Chappell’s handcrafted puppets evolved from scarecrow-like constructions to masterful golems of PVC, fiberglass, and other more refined materials. Each character is equipped with a story that has survived and developed over the course of several years. With the help of a student-dominated cast, Chappell hopes he and his puppets can provide a whimsical alternative to the “blood and guts” typically celebrated on Halloween.

Chappell began making puppets and putting on shows when he was in his senior year. At the time, the constructions were simple and the operation was carried out on a small scale and at random.

“It was really just a reason to entertain the passing people,” he recalls.

Over time, Chappell became more invested in the process, improving his craftsmanship and adding movement, lights and, eventually, complex narratives.

“We’ve learned that it’s the setting up of a story that leads to the vibe,” he said.

He said this year’s show features an ensemble of what he calls the “New English Trolls” – colorful puppets that have been nurtured and cherished for 15 years. This year’s story stars trolls Willyum and Burt, two brothers, and their nephew, Trent, who interns at the Brothers’ Brewery to earn high school credits. The plot involves the characters discovering an old board game that transports them to another dimension. Chappell said the idea for the story stemmed from the interests of his students.

“I’m a high school teacher… and I noticed that instead of playing video games, they were playing Dungeons and Dragons the old fashioned way,” he said.

Chappell’s students, who make up almost all of the 15 crew members, didn’t just inspire the plot. They inspired Chappell to aim high with his shows, helping with the construction of puppets as well as the production of the show.

“Their enthusiasm, sincerity and originality (makes students special),” he said. “These guys have ideas and they’re brilliant. They just need someone to listen to them.

After a one-year hiatus due to the COVID-19 pandemic, the new venue at the Skeleton Crew Theater at Shea represents a new horizon. Along with a singular performance at Turners Falls High School, this will be the company’s first indoor show. The change of environment will allow for more flexibility with sound and lighting, as well as a more formal experience for the audience.

“It was always out in the woods and you were moving from station to station,” Chappell said. “This is the first time the audience will come in, sit down and watch him on stage.”

He hopes those in attendance will emerge with a new dimension of appreciation for Halloween.

“There’s another side of Halloween that’s overshadowed by blood and guts,” Chappell said. “It’s whimsical and magical … and that’s what we’re trying to capture on stage.”