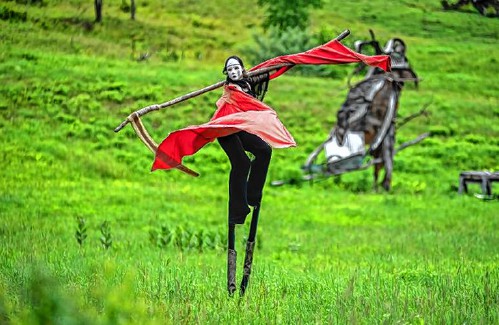 In 1982, a new feminist collective called Double Edge Theater formed in Boston and presented its first production: “RITES”, an adaptation of the ancient Greek tragedy “The Bacchae” by Euripides, with this modern version in public toilets for women. , with an all-female cast.

“RITES,” written by British playwright Maureen Duffy, was directed by Stacy Klein, one of the founders of Double Edge. Now, 40 years later, Double Edge is a staple in Ashfield, and the ensemble is celebrating this significant anniversary with several months of programming, with a title that dates back to the band’s early days: RITES.

These programs include collaborations with former bands and artists, an outdoor festival with new partner organizations and a new “Summer Spectacle” – Double Edge’s main annual production – which will offer a new variation of “The Bacchae”. .

Cariel Klein, co-producer with Double Edge, says that part of this work, which begins April 20, is designed to pay tribute to former members and collaborators of the ensemble, as well as to look forward to how Double Edge will create new collaborative works in the future.

“Part of it is going back to our roots, going back and staging some work with some of the people we’ve worked with in the past,” she said. “In some cases, these are people we have known for 40 years.

“We also celebrate the roots we have established at Ashfield,” Klein noted. (The ensemble staged its first production on its rural property, a former farmhouse, in 1997.)

The first episode of RITES will take place April 20-24, with an indoor festival produced in partnership with the International Magdalena Project, a cross-cultural network that provides a platform for women’s performance work.

These five days will include several performances by female, non-binary and trans artists from around the world, as well as works by a number of emerging artists. The interpreters come from Peru, Norway, Wales and several places in the United States (including Ashfield).

Emerging artists include Tomantha Sylvester, who is part of the Anishinaabe Theater Exchange in Sault Ste. Mary, Michigan.

Klein says these performances are backed by varying amounts of production aid from the Double Edge, depending on the size and parameters of their distribution. They all take place in the large indoor performance space of the ensemble, in a converted barn.

On May 27, the Ashfield Troupe will open “Constellations,” an outdoor performance festival that runs through June 12 and features productions from three of Double Edge’s newest partners.

“Freedom in Season,” for example, which runs May 27-29, is written and performed by Larry Spotted Crow Mann, a citizen of the Nipmuc tribe in Massachusetts and co-director of the Ohketeau Cultural Center in Ashfield, who worked with Double Edge in recent years.

“Freedom in Season” is based on the experiences of one of Mann’s distant ancestors, Samuel Vickers, who served in the Civil War; the play also examines untold stories of other Nipmuc men at war, the dispossession of Nipmuc lands, and the abduction of their children.

The other two outdoor plays, “Will You Miss Me?” and “In the Name of the Mother Tree,” will be presented by theater groups from Michigan and New York, respectively. All three productions will be staged in fixed locations on the Double Edge property.

Cariel Klein and Double Edge co-artistic director Carlos Uriona say this year’s Summer Spectacle, which begins July 15 and ends August 6, will revisit “The Bacchae,” with Stacy Klein directing a story based more on the point of view of the female characters in the play.

Uriona says Double Edge is celebrating another anniversary this year, as the first summer show was staged in 2002. These expansive productions have grown to include more than 50 attendees between cast, crew, musicians, set designers and others, and plays are staged in multiple locations on the property, with the audience moving along.

“They have become a true symbol of who we are, but not the only one,” Uriona added.

He and Cariel Klein say Double Edge has been fortunate to stage the productions over the past two summers, given that many other theater companies have been closed due to COVID-19. Still, the 2020 and 2021 Shows have also been scaled back somewhat due to the pandemic, and Uriona says the 2022 version will likely have a smaller footprint as well, including audience size.

“We will closely monitor any new developments [concerning COVID] because we want to make sure everyone stays safe,” he said.

The RITES 40th anniversary lineup concludes August 7 with a conversation between Stacy Klein and performing arts consultant and curator Baraka Sele about theater and life experiences, followed by a celebratory meal.

For more information on these and other programs, and to reserve tickets, visit doubleedgetheatre.org.

Blood West is a scary western with good ideas