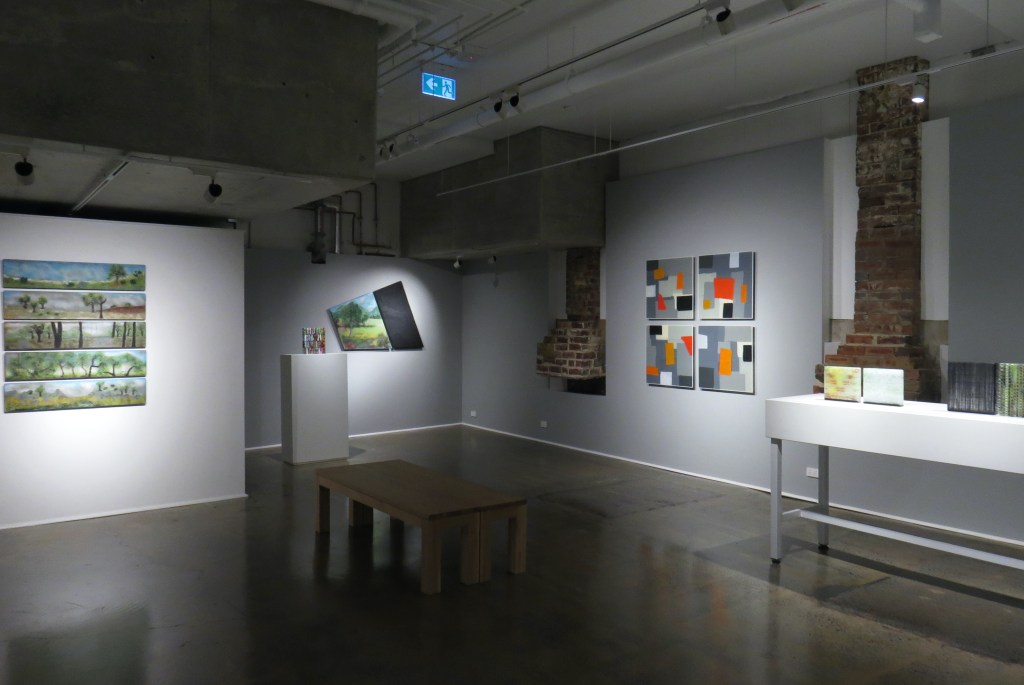 The exhibition no one has seen – artists talk about managing closures

Digital artist Deborah Kelly raised her hand for six; painter Ben Quilty raised his hand for two. For glass artist Brenden Scott French, it was zero, and so it is for ceramist Honor Freeman. This is the number of days the works of these artists have been shown, before their exhibitions close due to lockdowns.

For Caroline Rothwell, the magic number was five – but it’s not five days, it’s five exhibitions.

Although disappointed with the closures, Ben Quilty described himself as “lucky”.

“It’s really sad that people don’t see the work, but I feel lucky that it opened for two days; so many people’s shows have just been completely ruined, ”he told ArtsHub.

It was a sentiment shared by Honor Freeman. “You just have to change your expectations and put everything aside. I was lucky to have a project in the studio. ‘

While Freeman’s exhibition at the Sabbia Gallery in Sydney is unlikely to be experienced, it did have what she describes as a “strange window” between closures when a previous exhibition managed to stay open for its entire duration. at the Hugo Michell Gallery in Adelaide.

“I hang on to that and think how lucky I was,” Freeman said.

Kelly is in a similar situation with the perpetual “closed sign”. His and Rothwell’s work were included in the major multi-site investigative exhibit, The National. It was due to end in late August, but the Sydney lockdown cut it short by a month.

“I haven’t exhibited at the Museum of Contemporary Art Australia (MCA) for 15 years, so this is very important to me,” Kelly said. “And I’ve never exhibited at ACMI (Australia Center for Moving Image) before, so having a solo show – and them to build this amazing setting for my work – was a huge moment.”

Kelly’s exhibition The gods of little things is a large-scale animated collage.

“I haunted people on Instagram for the eight days it was open – maybe it was only six? I watched children immersed in my room; it was so exciting. I just hope I can see it, ”she added.

Sadly, while the Melbourne lockdown may open, borders with NSW will likely remain closed for the remainder of the show, meaning Kelly will never be celebrating that #irl moment.

This is a situation Rothwell can relate to. “These last two years have potentially been the most important of my career – my first solo show in a regional gallery was supposed to open in April, but Hazelhurst (Hazelhurst Regional Gallery and Arts Center) then moved it to open on July 26. – the day we got into custody in Sydney – so he’s still there in space, ”Rothwell explained.

“They really supported its reopening, but who knows if, when and how,” she added. Horizon is expected to continue until September 19.

For Rothwell, however, it wasn’t just his Hazelhurst show and The National. She was due to have her first solo exhibition in Asia with the Yavuz Gallery – which had been postponed from last year and was due to take place in April but was closed. No longer a project at the Calyx space of the Royal Botanical Garden, Infinite herbarium, also closed, and a solo exhibition with Tolano Galleries in Melbourne is due to open on September 4 – its first exhibition with the mall since 2017, which has also been postponed from 2020 and is not expected to be open to the public.

It is five projects that have had the carpet drawn.

MOMENT LOST IN THE GALLERY CYCLE

There are clearly benefits to being part of a gallery’s artist stable – especially for their collector base right now – but you are one artist among many they represent. This is a solo show, that means your chance to participate in a solo show may only come every two or three years.

One of the problems with expanding exhibitions taken in blockades is that the galleries – whether commercial or public spaces – have a tightly choreographed program.

“They just can’t block the program; maybe they could slow down and hang in there – that’s what happened last year – but they can “hold back indefinitely,” Rothwell said.

With this career opportunity stifled by ‘locked in’ exhibitions, artists must once again join the queue.

Quilty said: “It’s problematic – and the most salient point of all. These exhibits allow conversations with a much larger audience and for curators to see the work. Good curators – they attend these exhibitions to get involved in the work and find ways to put it into a bigger purpose.

He continued, “When I look back on my career, you’re not really aware of making a breakthrough, but only in hindsight can you recognize that a body of work has crossed certain boundaries and found. a unique way of telling a story.You can only know when you can assess how the audience reacts to this job and [how] conservatives [react], and none of this can happen.

“We are caught in a stasis. But I still can’t help but think that this is a first world problem, ”Quilty added.

It is a blow to his career that Kelly also feels. “I had curators from four states who came to see Creation at the MCA, all waiting for the situation to change, but they couldn’t see the work.

Kelly had been working on the play for two and a half years. “It’s very, very difficult to hold your head up high. Creation is supposed to tour a number of other sites, but it just might end up all wrapped up in a freight truck that won’t get anywhere. It is set to open at the Newcastle Lock-up next month.

Another key step that an exhibition offers to artists is peer review. “It’s a really nice way to celebrate the work you have done for months and months alone in the studio,” Freeman said of the timing of the show openings.

‘You are sweating and you feel completely nervous about it [unveil]. But when I have these openings again, I think I will go there differently, not with so much trepidation, ”she added.

Scott French continued, “The exhibit is a celebration, but you’re talking about long-term impact. I didn’t struggle with it at the start. Then it was “who’s going to see it and am I going to make sales?” It was a relief when they came. But that impact of not having audience engagement didn’t hit me until the series ended. I didn’t have that benefit of witnessing audience engagement and talking to people about what they were interested in about the job. This halted the momentum of the celebration from its establishment.

Scott French said that although he was told he had a solo show about 18 months ago, in the last eight months he ‘was seriously engaged – that was all I did … He There are still things going on outside of these gallery shows, but it’s just that the workload a show demands is about the one for this time. ‘

Do we dare to consider a ratio of time, cost, result in a pandemic? And what alternative artists really have?

Quilty told ArtsHub, “At the start of COVID, I took a few orders that I would usually say no to. At that point, we just didn’t know what it would look like in six months. But I haven’t had a big drop in sales. Right now people are still buying my work. A lot of people have money to spend on art. But for emerging artists, it’s much more difficult.

Scott French said the one-week difference would have been a totally different situation for him. “But I’m really lucky to be with a gallery that has a great relationship with its clients to make the show a success.”

He told ArtsHub: “I probably wouldn’t be so optimistic without this financial success – I had a great job for this space, for the show, and their trusted clients responded to it.” In conclusion, “There is always optimism about the industry. “

Freeman said of his next show: “My work could go both ways – it’s a really specific piece of art to remember a particular moment, but it could also be too much for someone who don’t want to be reminded – it’s a little too close to the bone. ‘

Freeman used the moment to “pivot” in a different way. “This show was in the works before COVID, but what I was going to do was different. I would be crazy to give up [my use of ceramic] now know – this is this moment and a chance to reflect on history and relevance – so I returned to thinking and researching the history of handwashing. ‘

Like Freeman, Rothwell knows the challenges of sculpture in the marketplace. She added, “It’s great to be working this last year and a half and having these amazing opportunities, but on the other hand, I have nothing next year. It kills you to broadcast these shows in one. white cube with no audience And it’s especially depressing with sculpture given the three-dimensional relationship to form – you have no idea online or with social media.

She continued the sales: “My income has practically stopped.

“Basically the internationals couldn’t get to Singapore, and the local Singapore market is interested in supporting their own artist in times of crisis, so the people they hoped to support my work couldn’t. Getting There.”

“I installed it through Facetime with the gallery staff, which was a weird experience,” Rothwell added.

In conclusion, Rothwell said of The National: “It was really exciting working for a show like this on lockdown – being ambitious when you’re locked in your space is a real gift.”

“And to be honest, I feel lucky enough as a mid-career artist to be able to continue to really explore ideas in depth, so to use the time to research them.” , she added.

Freeman told ArtsHub that she ultimately remained optimistic. “To be completely honest, I’m not a big Internet absorber. I feel saturated with all the material available so I’m afraid it will get lost. But people have pointed out to me that they are “going to see it [digitally] when they usually can’t go anyway ”.

Gina Fairley is the National Visual Arts Editor for ArtsHub. For a decade, she worked as a freelance writer and curator across Southeast Asia and was previously the regional editor for the Hong Kong-based magazines Asian Art News and World Sculpture News. Prior to writing, she worked as an arts director in America and Australia for 14 years, including in regional galleries, biennials and commercial sectors. She is based in Mittagong, regional NSW. Twitter: @ginafairley Instagram: fairleygina