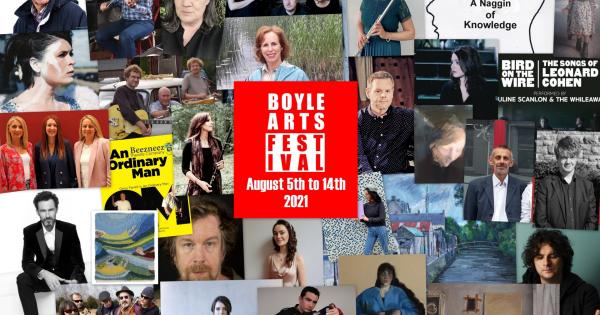 The Boyle Arts Festival will continue this weekend through August 8, with a selection of special events online through August 14. The “Crossing” visual art exhibit will be held in Kinghouse through August 31, with local art trails showcasing the visual arts by local artists on various grounds and windows across the city.

Music, theater and spoken word events will all take place at the new venue, The Marquee @ Quarry Lane.

Lizi, Lynda and Ceara will also be back for the first time in five years, with an afternoon concert on Sunday August 8 featuring classic songs influenced by modern and folk. A new song will be released before this concert. “Sweet Rocking Gum” composed by local man Cormac Calery, music by Donal O’Connor, and performed by Grain Cardebeck. Also note the concert of BAF veteran The Men Who Know Too Much, which will perform on August 7 at the Marquee.

Another of our very popular events, â€œKnowledge Naginâ€, is back on Saturday. Eminent scientists, Professor Marina Lynch and Professor John F. Crian will participate. â€œKnowledge Naginâ€ is one of our most popular events. The idea is to give the general nonprofessional public an overview of new scientific discoveries that affect all relevant areas of health. The presentation will be given in an informal and accessible manner. We are delighted to welcome Professor Marina Lynch from Boyle this year. Marina is Professor of Cellular Neuroscience at Trinity College and will be joined by Professor John F. Crian. Originally from Castleria, John is currently Vice President of Research and Innovation at University College Cork, Professor and Chairman of the Department of Anatomy and Neuroscience. “Knowledge Nagin” will take place on Saturday August 7th at 1:00 p.m.

The author, Louise Kennedy, reads part of her work on Saturday August 7 at 6 p.m. Widely published in the newspaper, he has contributed to The Guardian, The Irish Times and BBC Radio 4. In 2019 and 2020 he was shortlisted for the Sunday Times Audible Short Story Award and Writing.ie Irish Short Story of the year. His acclaimed collection “The End of the World is Cal de Sac” was published by Bloomsbury in April.

Laura Early discusses the photo book “Roscommon Mosaic Tradition: Geometric and Artistic Mosaics in Northwest Ireland” at 1:00 pm on Sunday August 8th. Laura is an artist and arts educator from Roscommon, recently funded by Roscommon. With support from the Creative Ireland program, the County Council creates and designs photo books based on the Roscommon mosaic tradition.

A specially commissioned work titled â€œSraithna BÃºilleâ€ will be recorded and created on video at BAF2021 for the first Kinghouse Piano Commission 2021/21. The sequel was composed by Dr Ryan Molloy. In collaboration with the Boyle Arts Festival and in collaboration with the Center for Contemporary Music, he was the first recipient of a new award funded by the Arts Office of the Los Common County Council, along with the Irish Arts Council. Co-starring Dr. Moroi are Mossy Martin (violin), Alan Kelly (accordion) and Steph Geremia (flute). The video will be recorded in the beautiful surroundings of Kinghouse’s main lounge and released next week.

Local musician Donal O’Connor has been commissioned by the Boyle Arts Festival to compose two new exclusive songs about Boyle. â€œI Am the Riverâ€ and â€œThe Queen of Main Streetâ€ will also be presented on video at BAF 2021. Harpist Amy O’Neill will perform at Flybrook House and attend an artist talk by Susan Manion and Laura. Early.