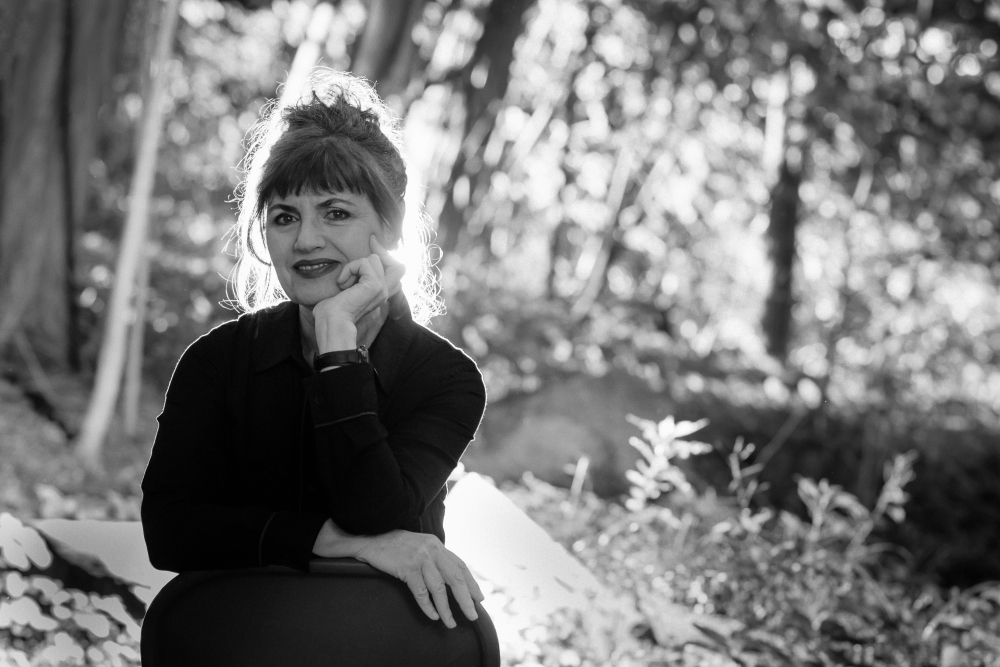 The Artist Next Door: Debbie Broshi

Growing up near Tel Aviv, Debbie Broshi has always painted. She thought she would become a painter. Her sister encouraged her to study art, which she did a bit, but turned to a more “practical” profession: makeup.

She studied in London. â€œI considered makeup to be someone who had studied art,â€ she says. After returning to Israel, she found employment in the film industry, specializing in special effects and fake injuries and dealing with the faces of actors such as Christopher Walken, Lauren Bacall and Peter Ustinov.

At the same time, she began to perform in comedy clubs. She and a writing partner turned short tracks into a show. Eventually, she became a full-time screenwriter and comedy performer, including appearances on an Israeli sitcom.

â€œI like to make people laugh since I was little, it’s a natural thing for me,â€ she says. â€œI like to laugh too; it is pure happiness for me. That heartbeat, the adrenaline rush that you get right before you go on stage, it’s a good kind of excitement.

Most recently, Broshi, who lives in Philipstown, has written plays, including short comedies for the Aery Theater Co.’s One-Act Festival at the Philipstown Depot Theater in Garrison.

But it is visual art – drawing, collage, painting – which takes it up again, after decades of absence. â€œI felt rusty and wondered how I could warm myself up because with paint you have to do it all the time to get it right,â€ she says. â€œTo free my hand, I had to start over.

Broshi visited the Garrison Art Center twice a week for life drawing sessions, followed by “reactive drawing” and collage. Many woke up. A few months after the workshops, she started to create her own art again and says she has since experienced a creative rejuvenation.

â€œI like painting at home because I can paint, go cook something, go back to painting,â€ she says. â€œSometimes I’ve painted all day and all night, other times just for a while, but it’s an everyday thing.

â€œI draw first, then I plan the composition. It starts with a general reflection, and that’s why it takes me a long time. Decorative details usually come after. I use colored pencils and acrylics, sometimes charcoal. I also use wood and work on textures and diluted colors.

â€œMy approach to paintings is in a way what I do with my writing. I create characters and an atmosphere. Sometimes I think of a character in the newspaper that catches my eye, or a situation. There are ideas behind every painting, which takes me days to think about. Sometimes I like to make a little joke, maybe only two people will see.

As an example, she cites “An Open Door”, a collage chosen to be in the Garrison Art Center. Small jobs show last year.

â€œI drew a fat woman sitting on a chair, holding a large pot of food,â€ Broshi says. â€œIt was inspired by a little diary photo of a woman. She’s sitting in front of her house. It caught my attention because of how it made me feel. It warms my heart to see him. I don’t know what she was doing with it, and it doesn’t matter, because I already had my own interpretation.

The painting â€œturned out to have no resemblance to the photo, but the idea is the same. I drew the woman holding the food pot and then drew a door behind her in a nice warm color. On the walls I attached pictures that looked like something happy – birds and other things. Some people said they felt like it was like an open door, and the idea with this painting was warmth and an open door.

Another example: â€œAn old photo of two sisters, one sitting, the other standing. My dog â€‹â€‹ate half the photo – he found it delicious. I have attached the photos, a piece is still missing, but the remaining parts had some of the pictures. In the original photo everything looks harsh: their dresses have dark stripes and look gloomy. Seems like they don’t have a great relationship, but I made her different because I see her the way I want to see her.

With all of her work, she says, â€œpeople ask me, ‘What’s their story? What are their thoughts? “

In one painting, Broshi incorporated a wallpaper pattern from the walls of the wedding reception hall his father owned in Israel. â€œWith all the people who were getting married there, he would come home and say to us, ‘I see joy every night.’ My parents were Holocaust survivors and endured so many years of hardship. In Israel, my father became a chief and ran this wedding place, where he fed thousands of people. There is so much emotion in this wallpaper for me. Small things are the link with bigger thoughts.

Broshi hopes to one day set up a solo exhibition. For now, his most recent paintings can be seen on bit.ly/debbie-broshi.

How the meadow garden became widespread