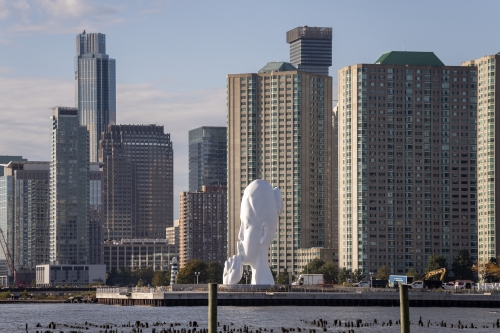 The sculpture known as â€œWater’s Soulâ€ is an 80 foot tall face that tells New York City it’s time to think it over.

Galerie Gray is pleased to announce the unveiling of The soul of water, 2020, a new in situ sculpture by internationally renowned artist Jaume Plensa. Measuring 80 feet tall, The soul of water is the artist’s tallest public sculpture to date and will be permanently installed in Newport on the Hudson River in Jersey City, New Jersey. The sculpture will be consecrated on site during a ceremony on Thursday, October 21, 2021.

Overlooking the Hudson River, Water’s Soul portrays the serene face of a young subject with a finger to his lips in a state of silent contemplation. The sculptural portrait, although on a monumental scale, humbly expresses tranquility, a call for empathetic self-reflection. Of great ethereal beauty, Plensa’s in situ installation pays homage to the Hudson River, aligning with the artist’s continued interest in bodies of water as agents of humanity. â€œWater is a wonderful metaphor for humanity,â€ Plensa reflects. â€œA drop of water is quite alone, like one person, but several drops together can create a tidal wave and form immense rivers and oceans; When people come together to exchange ideas and build community, we can build something incredibly powerful.

The soul of water nods to the historic Hudson River waterfront pier on which it sits, a place that has witnessed much of the trade in and out of New York Harbor on ferries and barges railways during the 19th and early 20th centuries. Plensa’s in situ sculpture recognizes this past while expressing humanity’s collective hope to build a better world. “The soul of water asks us for a little silence, he asks to listen to his deep voice which speaks to us about the origin of the world and its memory. The Lenapes, the Native Americans who lived on this land before us, were a deeply religious people and they believed that all things had a soul. I also believe in the spirit of water and its great capacity for connection and transformation. Water is the great public space, it does not belong to anyone and at the same time belongs to all of us.

The LeFrak and Simon families, developers from the Newport waterfront community in Jersey City, selected and commissioned Plensa to create a work for this site, recognizing the artist’s ability to convey a message of hope for the future of the city. ‘humanity. â€œOver three decades, Newport has flourished into a vibrant and diverse community. We are proud to welcome Jaume Plensa’s stunning sculpture to this one-of-a-kind neighborhood as we continue to establish Newport within the growing art scene taking shape in Jersey City, â€said Richard LeFrak, President and CEO General of LeFrak Organization. â€œAfter a generation of incredible work, determination and investment, this region has been truly transformed from what was once barren land into a vibrant and prosperous community,â€ said David Simon, Chairman of the Board, CEO and president of Simon. “This magnificent sculpture by Jaume Plensa is a phenomenal representation of the cultural sense of place that Newport embodies.”

“It is my wish to The soul of water to become the figurehead of Newport moving across water into the future, â€Plensa says. â€œVisually connecting Jersey City and New York City across the Hudson River, Water’s Soul reminds us that water is the great public space that has the power to unite people around the world. “

Born in Barcelona where he currently lives and works, Jaume Plensa (born 1955) is one of the world’s foremost sculptors in the public domain with famous projects around the world in cities such as Calgary, Chicago, San Diego , Montreal, Los Angeles, London, Dubai, Bangkok, Shanghai and Tokyo. Recent public sculptures include Laura in Century City, Los Angeles, Dreaming in downtown Toronto, and Voices permanently installed at 30 Hudson Yards in New York City. Over the past 35 years, the artist has produced a multi-faceted body of work creating sculptures that speak to the capacity and beauty of humanity, often bringing people together through the activation of public spaces . Conventional sculptural materials such as glass, steel and bronze blend with unconventional mediums such as water, light and sound to create hybrid works of complex energy, psychological weight and color. ‘symbolic wealth.

Exploring material and conceptual juxtapositions – interior and exterior, light and darkness, earth and sky – Plensa’s practice ranges from intimate works on paper to monumental public projects such as the iconic Crown Fountain (2000-2005), a modern day agora in the middle of the cityscape. Chicago Landscape, and Echo (2011) at the Olympic Sculpture Park in Seattle. Plensa unites her diverse practice to evoke inner reflection, silence, and intellectual engagement, often relying on the viewer-object relationship to complement her works. Plensa has received numerous national and international awards, including honorary doctorates from the School of the Art Institute of Chicago in 2005 and the Univeristat Aut’onoma de Barcelona in 2018, and the 2013 Velazquez Prize awarded by the Spanish Ministry of Culture. His personal exhibitions at the museum include those of the MACBA: Museu d’Art Contemporani de Barcelona, â€‹â€‹Spain; Museo Nacional Centro de Arte Reina SofÃ­a, Madrid Spain; MAMC â€“ Saint-Ã‰tienne MÃ©tropole Modern and Contemporary Art Museum, Saint-Ã‰tienne, France; LVR Max Ernst BrÃ¼hl Museum, BrÃ¼hl, Germany; The Toledo Museum of Art, Toledo, Ohio; Yorkshire Sculpture Park, Yorkshire, England; and Nasher Sculpture Center, Dallas, Texas.

Gray Gallery has represented Jaume Plensa since 1995. In addition to Water’s Soul, Gray has facilitated numerous gallery and museum exhibitions for the artist, as well as private and public commissions around the world, including recent Plensa installations. , Behind The Walls, 2018, at Rockefeller Plaza in New York; Looking into my Dreams, Awilda, 2012, at the Perez Art Museum; and Echo, 2011, at the Seattle Art Museum. With established galleries in Chicago and New York, Gray is a leading dealer in modern, post-war and contemporary art with leading private and institutional clients around the world. Founded in 1963, Gray represents and specializes in emerging and well-established artists of international recognition, including McArthur Binion, Alexander Calder, Jim Dine, Jean Dubuffet, Theaster Gates, David Hockney, Rashid Johnson, Alex Katz, Willem de Kooning, Joan Mitchell, Pablo Picasso, Susan Rothenberg and Evelyn Statsinger. With a reputation for excellence, integrity and discretion, Gray provides high level service and market expertise to new and old collections, advising on the acquisition and valuation of museum quality works.

LeFrak is a leading family-owned real estate company committed to community development and long-term ownership. LeFrak’s subsidiaries own and manage a large portfolio of real estate assets concentrated in the New York / New Jersey metro area, as well as in South Florida, Los Angeles and throughout the West Coast. Through its affiliates, LeFrak has developed and built the majority of its real estate portfolio and is one of the world leaders in real estate. The company is recognized around the world for the quality of its projects and properties, its financial strength and conservatism, its entrepreneurial business model and its commitment to long-term ownership. Although primarily focused on the residential and office sectors, LeFrak’s subsidiaries also invest in numerous hotel, commercial, securities, private companies and energy assets. www.lefrak.com.

Simon is a real estate investment trust engaged in the ownership of leading shopping, dining, entertainment and mixed-use destinations and an S&P 100 company, which has been in existence for over half a century. Through strategic development, Simon Properties across North America, Europe and Asia provide community gathering places to millions of people every day and generate billions in annual sales. As the world’s largest commercial real estate developer, Simon is the industry leader in innovation and was one of the early champions of urban and suburban redevelopment. Simon and its subsidiaries continue to focus on the needs of the communities in which they operate – from neighborhood shopping centers to Premium Outlet centers; they strive to provide a complete retail and entertainment experience for everyone.

Things to do in LA: Kristin Chenoweth, Andrea Bocelli

Behind the Mask: Visual artist reveals pieces of himself in quirky facial sculptures