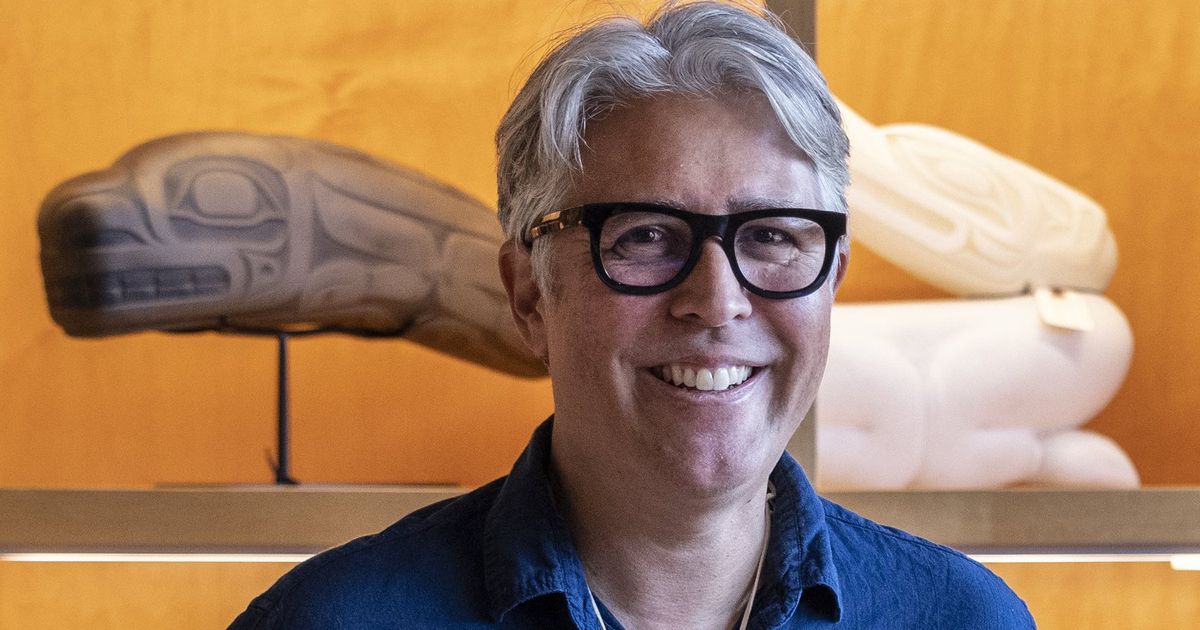 Inside the National Museum of the American Indian at the Smithsonian Institution in Washington, DC, an exquisite carved glass box glows from within. It’s the Daylight Box, a mythological vessel that’s part of an ancient Northwest Native story, brought to life in new ways by Preston Singletary, the internationally acclaimed Seattle-based artist, whose Tlingit heritage merges with his cutting-edge approaches to glass. .

The “Preston Singletary: Raven and the Box of Daylight” exhibit – which debuted in 2018 at the Tacoma Glass Museum and recently opened at the National Museum of the American Indian (until January 29, 2023) – tells the story of how light was given to the world by the powerful and mischievous figure of Raven. Raven broke into the house of a wealthy old man who had boxes containing the sun, moon, and stars. Transforming into a human child, he begged for the boxes, released their contents, and enlightened the world.

The fact that this story, told by this artist, is presented by the NMAI, which is very selective in offering solo exhibitions, underlines the importance of history to many Northwest Coast Indigenous cultures. and the achievements of Singletary himself. For decades, Singletary has reminded us of the sustainable Indigenous practices of embracing new techniques and materials and fusing tradition with invention.

According to Amy Van Allen, Smithsonian project manager for the exhibit, NMAI officials are very pleased to host “Raven and the Box of Daylight” because “Preston’s art brings this story to life in a unique way. so vibrant and accessible”, and because they hope to showcase Indigenous art and the “continuing innovation and creativity” of artists.

When Singletary began working with glass in 1982, he learned European glassblowing alongside luminaries Benjamin Moore and Dante Marioni. About five years later, wanting to introduce Indigenous subjects and styles into his glass work, he sought out mentors such as artist Joe David (Nuu-Chah-Nulth), who broadened his knowledge of Indigenous culture, especially on the very important form line of the northwest coast. design (the intricate style of expanding and contracting lines).

Since then, Singletary has become highly regarded in glass art circles, the wider art world and in indigenous communities, both locally and around the world.

“Raven and the Box of Daylight” is Singletary’s most ambitious project to date, full of technical innovations in individual glass pieces and multimedia experiences throughout the show. Light, sound and video installations feature stories of Raven told by Tlingit elders and music and soundscapes created by Singletary, who is also a musician.

We spoke with the artist in his studio in South Lake Union, just before the opening of the NMAI exhibition. This conversation has been edited for length and clarity.

It is quite a distinction to have your work exhibited at the Museum of the American Indian. How are you?

Well, that’s extremely flattering and humiliating. It’s something you would like to achieve, like getting to a certain stage in your career, but you never know if it will happen or not. So, it’s overwhelming and surprising, but I also had that kind of calm around it because it’s been in the works for so long.

That’s right, the opening was postponed for a year due to the pandemic and, of course, you started developing the show years ago. Take us back to your original idea. Why an exhibition on the history of Raven and the Box of Daylight?

Raven’s story is one of the best known on the Northwest Coast. Raven Steals the Sun, Raven Brings the Light, Raven and the Box of Knowledge – all of these titles are versions of this story. I always dabbled in Raven imagery and touched on aspects of the story, but then I met a Tlingit elder named Walter Porter, a mythologist who kind of dissected the stories the same way Joseph Campbell l would have done, drawing parallels with other theologies and mythologies. Walter opened my eyes to a lot of symbolism, which gave me inspiration to create different types of sculptures. And that informed that direction for me, that the sculptures would take viewers through the story.

Walter and I were going to work on this exhibition together, but unfortunately he passed away. I had to find another curator and immediately thought of Miranda Belarde-Lewis because she is Tlingit and Zuni and a professor at the University of Washington. She does really in-depth work on the science of Aboriginal artifacts and the uses and reasons behind them.

So your glass objects guide viewers through the story of Raven releasing light into the world, with many more moments along the way. Some of your sculptures are illuminated by video projections or surrounded by light and sound installations. Why are these immersive elements important to you?

I’ve played with it on small levels over the years. Many years ago, around 2000, I created a [immersive] feeling of installation at the Travers Gallery, where I exhibit in Seattle. And even made music because it’s my other passion. I work with aboriginal themes, aboriginal musicians—that’s my other art form. So, with this project, I wanted to transform the viewer into another place. The lighting and environment create a metaphor for moving from dark to light.

I was able to work with Juniper Shuey – a visual artist doing projected video, who has a background in theater – and he and I designed the exhibit together, developing video projections as backdrops for certain scenes and animating individual sculptures in the galleries. I wanted to create this illusion of movement, of transformation. Like Raven’s fleeting movements and changes. And the experience would be different for each person. With some of my musician friends, we created five or six soundscapes that blend together throughout the exhibition. A sound artist, Matt Starritt, also worked with us, installing directional speakers, so depending on where you are, you get different mixes of different music tracks.

I wonder if it’s related to the way you play with light and shadow? You’ve been doing this for some time with your glass sculptures, bringing light through in a certain way, setting up different ways of experiencing the work.

To the right. And, it’s so symbolic here. Like with one of my sculptures that symbolizes Raven’s transformation from a bird to a human form. It’s kind of a humanoid figure – a human head with a bird’s beak – and the video is projected onto it, so you get the shadow effect and the movement and these transformation iterations.

It’s as if viewers can understand the story through these multi-sensory artistic methods. For some Indigenous artists, there can be a kind of back and forth between individual creative expression and the responsibility to learn and educate. How do you feel about that?

Absolutely, I would like people to discover the culture. I feel like when you become a cultural knowledge keeper, it becomes a responsibility. I really try to honor the story and the art form and present it in a new way. It’s kind of my hope. That people will be surprised and in the process learn the universal nature of mythology. This story touches the world in darkness. And who brings the light? It could be Raven or Jesus — that’s a metaphor people can relate to. If you look very closely, you can see that we have the same kind of human experience.

It’s an opportunity to transform people’s perspectives on what we do as Indigenous people. It humanizes the perspective of Indigenous peoples and declares the fact that we have endured. There’s a bit of pride that I take in being able to show work in this context, that it’s something that I declare: this is who we are and this is what we do.

What are some of the changes you’ve seen in the recognition of contemporary Indigenous artists?

It’s definitely grown up. This is an exciting time for Indigenous cultures. There is great pressure for land recognition, but it can only be paid lip service. It does not return the land to the aboriginals. I mean, it’s important. It’s nice to hear it. But it doesn’t really affect the dynamics very immediately. But more recognition of artists, more shows, more orders, that does something.

As artists of old, we would have done the work only for the community. Now the household heads and clan leaders are not as financially self-sufficient as they were when they owned all the land. They could order totem poles and items to craft, Chilkat robes to weave, button blankets to craft. Now, many clan leaders are important figureheads for the community, but they are not financially self-sufficient as they used to be. By pushing for the acceptance of Indigenous artists, whether in the context of public art or obtaining high profile performances, this leads to financial empowerment.

I work in collaboration with other indigenous artists around the world and it gives me perspective on my concern for my own community. Often it is a common experience with imperialism or oppression. And then from there, the community survives.

In many ways, artists are people who see things. They make things with their ideas and their hands to represent what is happening. It’s exciting to see what’s happening – art that feels really contemporary, like something new.

Your work has been well received in Aboriginal community centers, cultural museums, fine art galleries and glass museums. Why do you think your work moves so easily between these contexts?

My work, I think, has always tried to be recognized as something more than ‘ethnic art’. But at the same time, that’s what gives it its power. It’s tied to history, a personal connection through my ethnic background and my matrilineal society from my mother to my grandmother and my great-grandmother. I am part of this continuum.

Gayle Clemans
is an art critic, art historian and novelist; connect with her on Twitter and Instagram @gayleclemans.