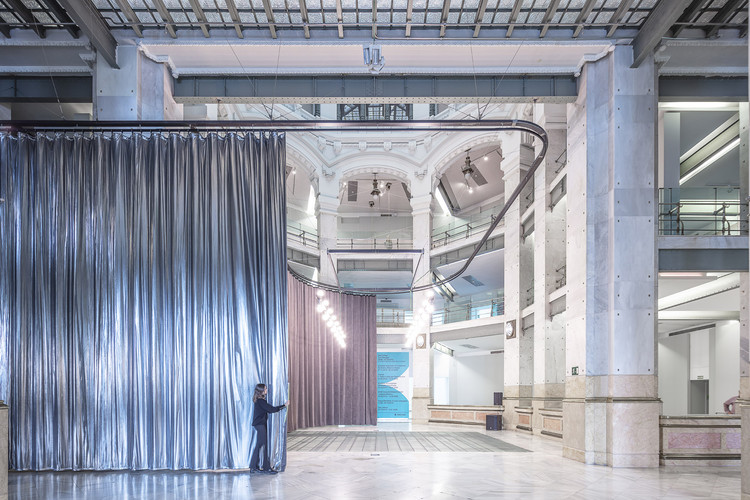 Text description provided by the architects. Colgando del Centro is the result of a public competition launched by the City of Madrid (Madrid Destino) to adapt the existing Court of Operations of Cibeles Palace into a new public space for the city of Madrid. Therefore, the project consists of a number of interventions inside the old Telecommunications Palace, built at the beginning of the 20th century as a post office by Antonio Palacios and Joaquín Otamendi. Today it houses the CentroCentro cultural space. The historical context of the project conditioned the nature of the intervention, transforming the proposal into a reversible intervention, without affecting any original structural element. In addition, it is mainly a mobile construction, so it would be possible to hide its main elements and its furniture if necessary, thus creating a slight modification on the current morphology of the Court of Operations.

The objective of the project was to intensify the functions of reception, information and participation through a new zoning strategy which clarifies the internal organization of the Court. In order to implement this design strategy, we have included new furniture and suspended structures that illuminate, multiply the versatility of the space and facilitate the exchange of information.

Access. Due to the monumental nature of the building and its facade, the project was understood as a gateway, not only to the CentroCentro, but to the city of Madrid. Therefore, we have proposed a new entrance walkway that solves the serious problem of loss of climatic comfort that the previous system produced in the building. In addition, it frees the entrance hall of the building without losing or substantially modifying the exterior view of the Palace. The new access consists of three stainless steel bodies and interior glass doors that allow the visual and transparent connection between the Center and the city. The central body allows entry through a revolving door and the sides function as emergency exits.

Information desk. The new information point is located right in the center of the cultural center and opposite the new access. This circular information desk functions as an information point for tourists both for CentroCentro and for the city of Madrid. Its suspended lighting structure serves as a claim to both the interior and exterior of the building. Central nave: The space of the operations courtyard is divided into three naves. Its monumental scale creates endless possibilities for its program. One of the main features of the project is the system of curtains and lighting that we have proposed for this nave. They function as a suspended structure suspended from the original steel structure of the building. This system makes it possible to configure new domestic spaces within its central nave. The new structure could accommodate events ranging from a town hall, a children’s workshop, to a larger venue such as a conference or institutional gatherings.

Rest and work areas. The three naves are surrounded by smaller ambulatory spaces. This perimeter is limited to a line of historical meters which were originally used as post offices. The project transforms these counters into storage space for new furniture.

Shop. We moved the store space and redesigned its furniture following the same principles as in the rest of the project. It combines both fixed counters and movable furniture, which can be distributed throughout the Court of Operations. Gloria Fuertes Hall: A new space for the public that supports the activities of the CentroCentro. Signage: Following the main idea of ​​the project, we designed new building signage and information elements through structures suspended from the metal frame of the existing building.

The project aims to be a respectful intervention inside the historic Telecommunications Palace through a series of actions that enhance the scale, color, materials and light of the existing building. Colgando del Centro aims to endow the building with a new, changing and attractive program of activities, making this Center a point of reference for the city of Madrid.