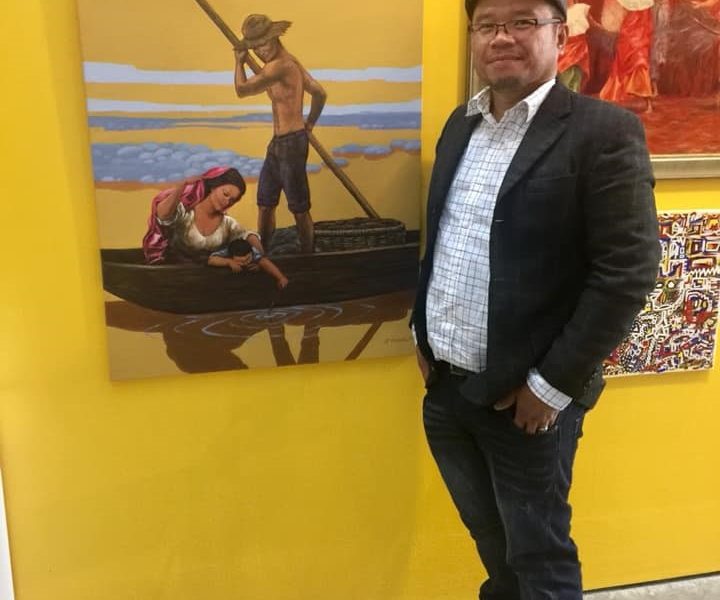 Being a well-known visual artist has always been the goal of Charlie Frenal, of Filipino and Canadian descent; this is what he envisioned for himself since the age of four.

His interest in art at this young age eventually grew into a passion – a passion that led him to discover a new aspiration.

Charlie discovered and started pursuing this goal in his hometown in the Philippines. The eldest of eight siblings, he was born in Polomolok in southern Cotabato to two officials.

The love of art is rooted in their family as her siblings are also fond of drawings and paintings, and they have a grandmother and aunt who were also artists.

Although his grandmother and aunt had become a big influence on him, Charlie’s interest in art was ignited when he received a simple appreciation of the students from his mother, who was then a teacher, for his illustration of a chicken life cycle that he drew on the chalkboard for the class.

Recalling what happened that day, Charlie said some students noticed him scribbling on his mother’s lesson plan as he accompanied her to class. The students encouraged four-year-old Charlie to draw on the board instead, and there he began to draw shapes; an egg that developed into an embryo and eventually into a chicken.

â€œThe whole class really enjoyed it. From there, my parents encouraged me to do more drawings.

Encouragement from his parents became Charlie’s fuel to unleash his artistic potential. Thanks to them, Charlie was bursting with determination to hone his artistic skills and demonstrate it to a wider audience by entering contests. His parents had always been there to cheer their son on whenever he entered a school art competition and other events since first grade.

To explore his own style of drawing and painting, Charlie learned on his own to use different art mediums. He started with watercolors and colored pencils, then turned to acrylic paints which he found very comfortable to use.

He also took the time to research and learn from the artists he most admired and one of them is famous Filipino artist Juan Luna.

“I was really inspired by his painting ‘Spoliarium’, his style of brushstrokes and colors, and most of all, the message of his piece.”

Charlie continued to perfect his craft while participating in several competitions outside of school. At that time, he was balancing these art competitions with his architectural studies at the University of Mindanao.

His passion led him to numerous art exhibitions where he was supposed to find his new aspiration:

Promote the Philippine heritage through the visual arts.

He began to pursue this path when he joined the Metrobank Foundation’s annual National Young Painters Competition in Pasay City in 1997, when he was 17. Charlie became a semi-finalist for his painting “Ang Mga Taga-Ilog”, where he showed Filipino tribal women washing clothes by the river.

Charlie continued to strive for this goal even after graduating from college in 2001 and when he began his professional career.

Freshly graduated, Charlie worked as a draftsman for two years, a prerequisite for admission to the Architectural Council. When he passed the board of trustees and obtained his professional bachelor’s degree in 2004, he became a professor at the College of Architecture at Notre Dame de Marbel University, South Cotabato until 2007, then worked as an architect on various construction projects.

Meanwhile, its lists of art exhibitions and accolades grow longer.

In 2009, he participated in the National Exhibition of the GSIS Painting Competition in Pasay City, where his work, â€œSagipâ€, finished among the 10 finalists. The artwork aimed to raise awareness about the protection and preservation of the natural environment, while presenting the Filipino spirit “Bayanihan”.

This was his last exhibition before leaving the Philippines in 2012.

Charlie emigrated with his wife, Jihan, and daughter, Czarina Reign, in May 2012 to Calgary, Alberta, where their youngest, Claude Brent, was born. They decided to fly to Canada to explore other opportunities for their families.

Moving to a new environment made the Frenal family excited and happy as they were able to learn a lot of new things. But that came with many adjustments, including adjusting to a very cold winter, settling down and applying for jobs.

In addition to these obstacles, they suffered discrimination because of their racial roots.

â€œTo be honest, being a visible minority is quite difficult, but mutual respect, understanding and tolerance are all that matters.

The new chapter in their life may have started quite difficult, especially without the help of their family and friends, but the Frenal family were able to face the difficulties with the help of their new friends “who are ready to go.” support them in so many ways. “

Charlie and Jihan began their careers in Canada as AutoCAD draftsmen for a steel fabrication company and early childhood educator, respectively.

Despite the overwhelming adjustments in their new home, everything about Charlie as a Filipino still shows in his daily life in Canada and in his artwork.

The promotion of heritage continues

Charlie had consecutive opportunities to promote the rich culture of his homeland through his art in Canadian society. It all started when he joined the Generations Under the Sun: Celebrating Filipino Heritage in Canada exhibition at the Kamloops Art Gallery.

The exhibition, which took place in 2019, became more special for Charlie as his daughter also exhibited her own work. Her work, â€œRipple,â€ showed a family sailing the sea in a small boat, while Czarina’s painting, â€œMag-ina,â€ showed a mother and daughter kissing.

This event was followed by other cultural exhibits until in April, Charlie joined the 2021 annual International Art Mail Show hosted by the Federation of Canadian Artists (FCA) at the Federation Gallery. from Vancouver.

His work, “New Day” or “Bagong Umaga” won him the first place, beating dozens of other entries from different parts of the world. Through this work of art inspired by the way of life of the fishermen of the Philippines, Charlie hopes that whoever sees her will remember that every morning always brings a new beginning and a new hope.

“I have participated in many competitions in the past, but I can say this is the most memorable because besides being a winner it was a dream come true [for me] as an internationally recognized artist. I am also proud to honor the Philippines and Canada, and finally, [giving] inspiration for others.

Until now, Charlie continues to achieve his goal, which will always be his plan going forward.

Soon more of his works promoting Filipino culture will be unveiled, with his masterpieces the next to be shown at the Philippino Canadian Art Museum later this year. His preparation for the FCA’s exhibition competitions is also underway, following his participation in Dimasalang lll International Artists’ Plein Air 2021, an outdoor painting held at Jericho Beach in Vancouver, British Columbia.