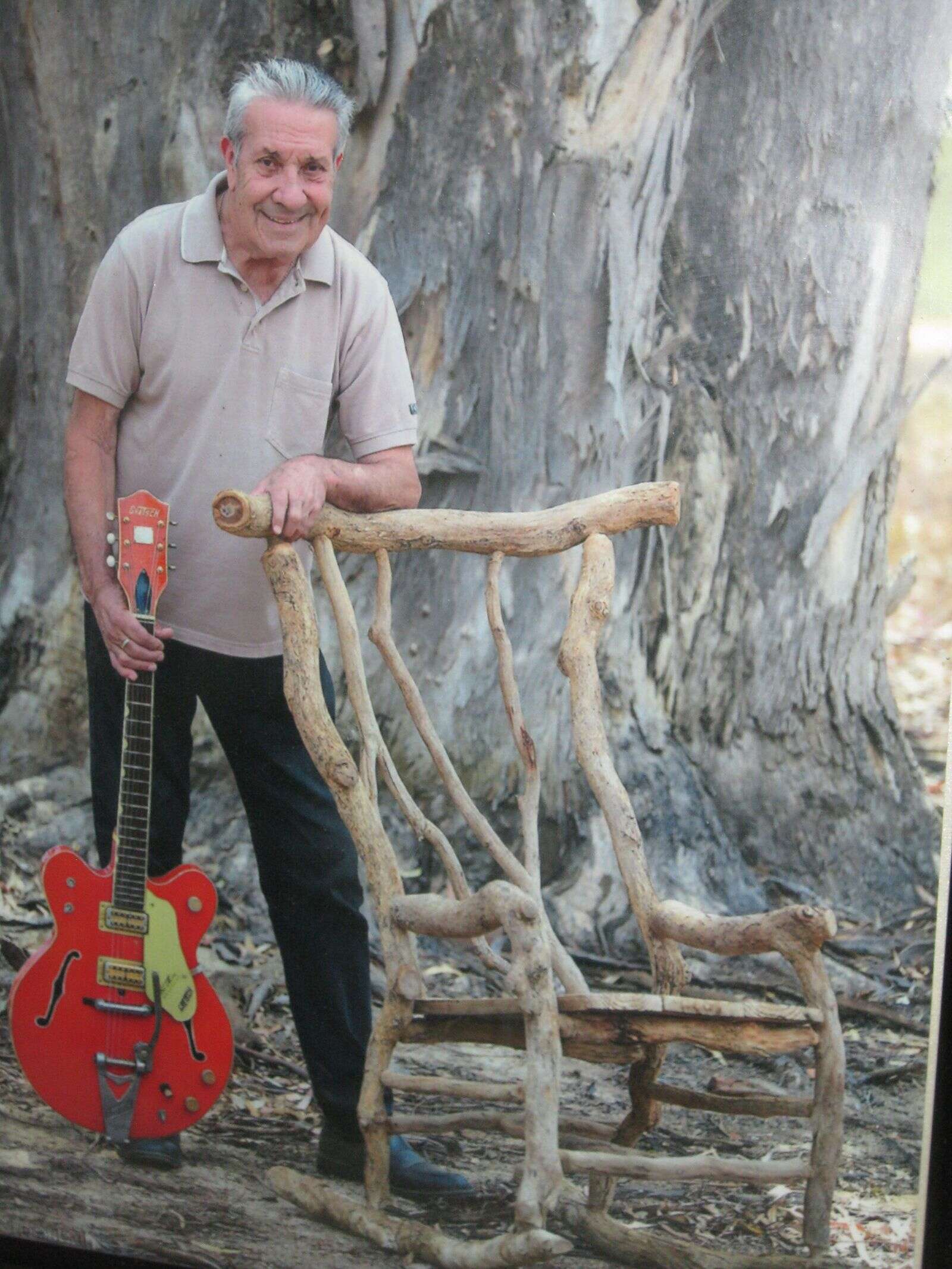 Uncle Clive was an Elder of the Yorta Yorta/Dja Dja Wurrung Traditional Owners of Central and Northern Victoria extending to NSW and the Barmah/Moira Forest Wetlands.

He grew up on the Dungula, Yakoa and Keila rivers and spent much of his life following fishing traditions passed down through thousands of years of customs and practices.

As a Yorta Yorta/Dja Dja Wurrung man, Clive Atkinson has created an outstanding timeline of accomplishments.

He has combined a diversity of careers as a graphic designer, artist, educator and community worker.

He has used his considerable skills to celebrate and promote Indigenous culture in his own community and around the world.

One of his main skills was the ability to listen to ideas and convert them into conceptual designs and images that reflect the cultural traditions of his people and their ties to the country.

His love for the country and his career path are best described in his own words in the short music video that will be shown during his celebration of life ceremony in Echuca.

Clive was born in Mooroopna in 1940, a year after his parents, Clive and Iris (née Nelson), joined others in leaving the Cummeragunja reserve to protest against its restrictive and oppressive rules and poor living conditions .

Like many who left the reserve, the family settled on the plains of the Mooroopna River, living in often flooded tin shacks, forcing people to move to another site on higher ground at Dashes Paddock .

Clive’s father, a shearer by trade, was determined that his children would have a better education than his generation had received under the reserve system.

Thanks to his mowing work, he was able to buy land in Echuca South and moved there with the family in the mid-1950s, when Clive was seven years old.

Encouragement for his natural artistic ability

His mother Iris also nurtured her son’s exceptional talents and featured his paintings in local art exhibitions, which he often won.

Although his teachers hoped that Clive would become an art teacher, he was drawn to a career in commercial art and pursued this dream after finishing 10th grade.

He received an art scholarship to attend the Royal Melbourne Institute of Technology, earning a degree in illustration, graphic design and fine art.

After a short stint in Melbourne as a commercial artist for Myers, Clive began an apprenticeship with the river herald in his hometown Echuca.

There he learned the trade of printer and linotype.

Clive took every opportunity to learn.

Clive said, “My mum always said don’t try to be better than anyone else, just try to be equal”, and that has been important to her life journey.

Clive’s interest in learning took him to London and then to Canada.

Abroad, he gained experience working with large commercial presses that computerized the printing industry and completed a degree in advertising and marketing in Vancouver, Canada.

After six years, Clive felt the call of home and the Dungula River.

He returned to Australia and found work in print shops in Melbourne before starting his own company AdverType, a graphic design studio in South Melbourne.

AdverType served a variety of ad agencies and within a few years employed 24 people.

Clive has built a beautiful home for his Canadian wife Linda and their two daughters, Stacey and Danielle.

He learned these skills as he went, including cabinetmaking.

In the 1980s, Clive sold his share of the business to his partner and later formed Prahran-based Atkinson, Palmer and Associates.

His reputation as an Aboriginal graphic designer led him to design logos and branding for a range of Aboriginal agencies across Australia.

He recalled that at the time, many simply adapted the Aboriginal flag as a design emblem.

Not content with this approach, Clive created logos and branding based on well-researched rationales.

One of his greatest accomplishments was designing the branding for the Aboriginal and Torres Strait Islander Commission when it was established in the early 1990s.

Its memorable design succeeded in representing two different cultures, bringing together the varied elements and symbols in a cohesive and meaningful way.

Clive has designed images for many Aboriginal organizations in Australia.

He has also designed campaigns, images and posters for a number of government agencies and businesses, including several sets of postage stamps for Australia Post.

He explained, “I used a lot of Indigenous imagery and tapped into our cultural heritage. In the stamps I used totems, which is symbolic and meaningful.

The effect, he says, has been twofold.

Clive was co-designer of the Melbourne Museum’s Bunjilaka Galleries in the late 1990s and provided designs for the Australian National Museum’s Indigenous Galleries.

In 2015, he designed the Carlton Sweater for the AFL’s Aboriginal Round.

Throughout these years, Clive has never stopped painting and sculpting, with exhibitions of his traditional Aboriginal paintings and pottery in Australia, as well as Germany and Canada, including an eight-panel mural in Victoria University in 2002.

In 1995, Clive fulfilled a long held dream of returning to his traditional country near the Goulburn (Kaiela) and Murray (Dungula) rivers with his wife Judy and their young son Bidja.

He pioneered the creation of “Bush Furniture”.

Unique pieces of wood were taken from the forest floor of the river areas around Echuca to make objects and furniture.

With Judy, he formed the Mirrimbeena Aboriginal Education Group in 2001, a licensed provider of adult, community and complementary education.

Among its programs, Mirrimbeena offered training in the construction of bush furniture. Its guiding philosophy was based on Indigenous and non-Indigenous people working and sharing for a common good.

It is this philosophy that drove Clive to become actively involved in community projects in the Echuca-Moama region.

He was a member of the Steering Committee for Additions to Echuca Hospital and also participated in the Bridge Arts project to create an outdoor art installation on the Murray River to depict the history of the Murray-Goulburn area.

In 2007, when Judy secured an area of ​​Echuca Cemetery as an Aboriginal resting place, Clive assisted in the design and layout of the Aboriginal section, the first of its kind in Victoria.

They followed this achievement with the design of a similar Dreamtime enclosure in Ballarat Cemetery, providing a place where the people of Wadawurrung can be buried in their own country.

Throughout his long career, Clive has always enjoyed learning and working collaboratively with others.

He believed that hard work brings its own rewards and that professionalism is paramount.

As he said ”Whether you are designing for the small local flower show or for a large organisation, you always treat the project at the same level”.

Musically, Clive and his family continued the musical tradition influenced by their people who lived in Maloga and Cummeragunja.

He learned to play the guitar at an early age and formed the legendary group Shades which was one of the popular dance groups in the area from the 1960s through the 80s.

The other members of the band were his two brothers Wayne and Graham and his brother-in-law Paul Burchill, making it essentially a family band.

The group achieved accolades for numerous performances, winning the Battle of the Bands Competition at Benalla and other accolades for musical excellence.

Most of the members are still active in music, praising the fact that they are one of the oldest groups who can still do so when family concerts are held for a celebration.

Clive also used his musical prowess to start the Echuca Country Music Club in the late 80s, which continues to hold its fortnightly concerts for country music fans.

Another feather in the hat to add to the diversity of contributions Clive made during his life, leaving an inspirational legacy for all of us to reflect on today.

THE FUNERAL OF CLIVE ATKINSON WILL BE HELD ON TUESDAY JULY 19 FROM 11AM AT DUNGALA FUNCTION CENTRE, MOAMA.