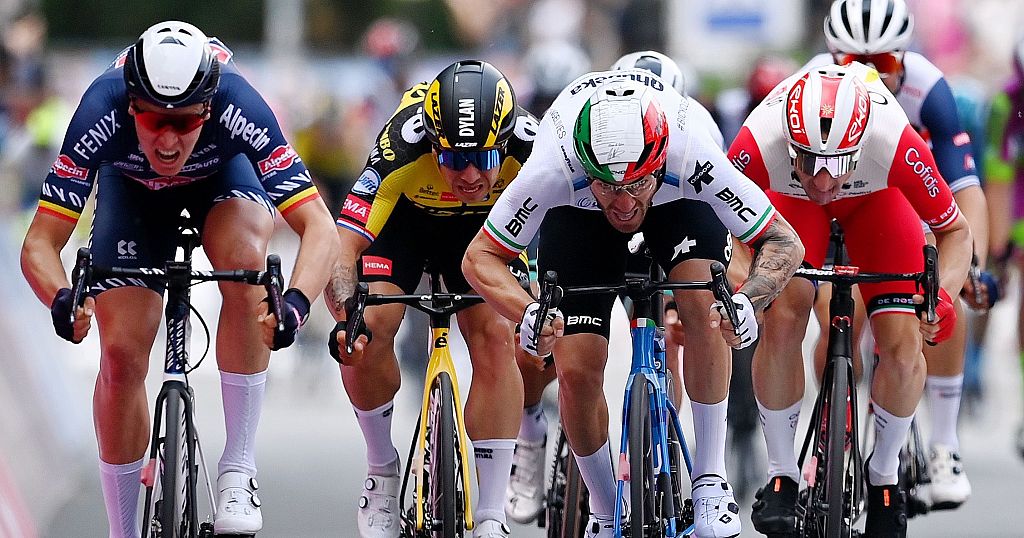 The stage was won by Tim Merlier (Alpecin-Fenix) with Elia Viviani after Nizzolo at home to complete the podium.

A relatively benign peloton run to the finish saw some key moments in the well-organized last 4 km by Bert-Jan Lindeman, Max Walscheid and Victor Campenaerts.

In the final, Merlier opened his sprint with around 200m to go and impressively managed to hold back the fast-finishing Nizzolo, who just couldn’t get around him at the line.

At the end of the second stage Team Qhubeka ASSOS also retain fifth place in the general team classification.

I think overall I got the best out of it (the situation), Merlier did a great sprint so I think today the strongest won. Obviously, as it was the first stage of the Giro, everyone was full of energy so the sprint was pretty hectic and I ended up in a good place with 1 km to go.

I had a good wheel, I tried to overtake it but obviously it was not enough.

Overall I’m happy and I think we’ve started this Giro well; and hope we can get a better result in the next few days.

We should be happy with how he ranked in the final, because we’ve seen a team together at the right times – they were there – and it’s already satisfying when you’re in the car and you see the plan works.

At the last moment we narrowly missed a guy but Giacomo is smart enough to be in the right place, on the right wheel. We have already talked about Merlier, we have seen that he was driving well in recent weeks so I think everything was in place, and finally Giacomo was beaten.

This is a second place in the Giro d’Italia, during a Grand Tour. He should be happy and we expect more, and it will come. That’s for sure.

Distributed by APO Group on behalf of Team Qhubeka ASSOS.

We had our first major victory in 2013 when Gerald Ciolek won Milan-San Remo, one of the five monuments of cycling. We have competed in six Tour de France and won 7 stage victories, with Mark Cavendish wearing the coveted Yellow Jersey at the 2016 Tour de France.

We are a multicultural and diverse team with bases in South Africa, the Netherlands and Italy. There are 19 nationalities represented in our World Tour and Continental Feeder team rosters. Our focus on the development of African cycling has enabled more than 55 riders from the African continent to be offered the opportunity to race on the world stage since the inception of the team.

We run to help people get ahead with cycling through our relationship with Qhubeka Charity. Through our work with Qhubeka, we have helped distribute over 30,000 bikes to communities across South Africa.

About Qhubeka:
Qhubeka is a charity that gets people moving with bikes. People are gaining bicycles through our programs, improving their access to schools, clinics and jobs.

A bicycle is a tool that helps people travel faster, farther, and carry more. In the face of extreme and persistent poverty, bikes can change lives by helping tackle socio-economic challenges at the most basic level – helping people get to where they need to go.

All images attached to the press release may be used with the respective image credit in conjunction with this release.

Africanews provides APO Group content as a service to its readers, but does not edit the articles it publishes.

Letter to the editor: Thank you for your commitment