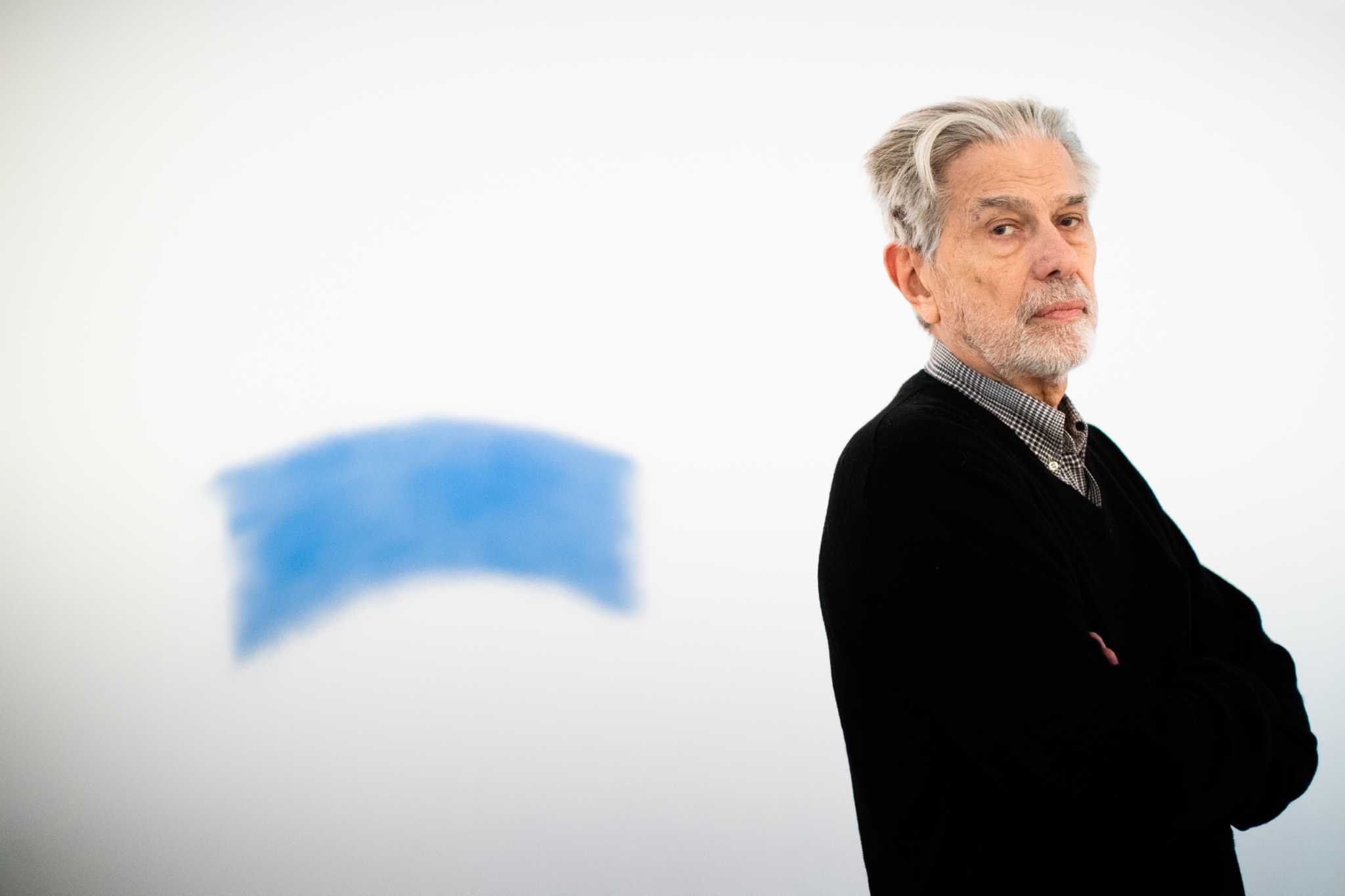 Mel Bochner has no idea what Houstonians will think when they first see “Smudge,” the fourth installment in the Menil Drawing Institute’s wall drawing series. “I don’t care,” he said. “I just want them to think.”

Artists spent up to two weeks creating a large-scale, site-specific work for Menil’s white wall section. Each exhibition remains visible for one year.

The first iteration of “Blue Powder Pigment Wall Pieces” debuted in 1968. At that time, the discourse on art was object-centric; Andy Warhol’s “Brillo Boxes” and Jasper John’s “Flags” defined the zeitgeist.

“My question was, do you need an item?” Bochner remembers.

In a catalog statement published in 2000, he referred to a passage from Ludwig Wittgenstein’s book “Zettel (Cuttings)”: While I look at an object, I cannot imagine it.”

Bochner’s work came of age in the late 1960s and early 1970s as part of the shift from abstract expressionism to more conceptual art. His generation defied unspoken codes, a mantle he maintains to this day.

He claims that most works of art consciously or unconsciously draw the viewer in a certain direction. And Bochner doesn’t want to do that. His view is that the artist’s feelings shouldn’t matter at all. Work should be more democratic and based less on pre-determined conditions.

“What I think is nobody’s business but mine,” he says. “And what the viewer thinks if no one is watching but him.”

With “Smudge” and his other “Blue Powder Pigment Wall Pieces”, Bochner envisions what is the simplest and most primitive human gesture. “The way the arm moves at the elbow, the arch it paints,” he replies.

There’s no such thing as getting it right, because there’s no formula. There is no pressure on Bochner or the viewer. He understands and accepts that this philosophy can upset expectations. Although with an open mind, “Smudge” may surprise viewers. They can smile or get angry.

“If they don’t have an answer, that’s also legit,” Bochner says. “I just want them to have a conversation in their head: ‘Why is it blue? Why is it on the wall?’ Then there is a dialogue.”

For the Ménil series of ephemeral drawings, chief curator Edouard Kopp is responsible for asking the artists to pose visual questions to museum visitors. Spoiler alert: there are no right or easy answers.

He alluded to Bochner’s sustained commitment, which spanned decades. He praised Bochner’s thoughtfulness and precision as a writer.

Curiously, a preoccupation with three-dimensional objects is what led to “Smudge”. Not words on paper or bulkier media, but an inherent thickness. Bochner once suggested that “Before the invention of canvas and stretcher bars, the primary medium for visual images, since cave painting, was the wall.”

Kopp shared his excitement at seeing how Bochner would invest in and view the vastness of the Menil Drawing Institute’s wall space.

The artist has respect for the place. “It is the first drawing museum,” says Bochner. “The first wall drawing revolutionized art because there is only a short time while you look at it…Drawing is the foundation of visual art, and this place celebrates drawing.”

Yet he can’t help but state the obvious. “It’s a big fancy space for a little blue spot.”

Bochner has a sense of humor about the exhibit and he hopes visitors will too. He thinks it’s funny in an ironic sense. There is no deep, hidden meaning. She is what she is and fulfills the essential function of the artist.

“It might lead the viewer to say, ‘What is this? ‘” says Bochner. “But it also calls into question, ‘Why is this a work of art?'”