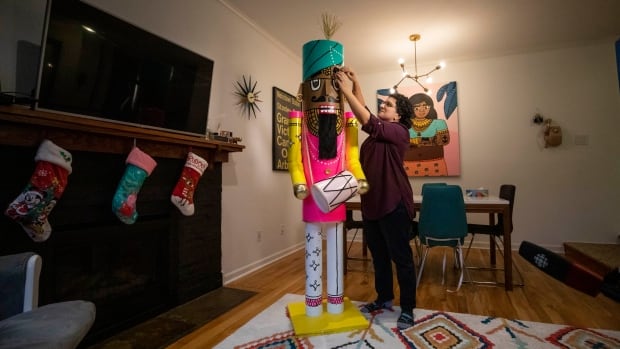 A visual artist from Pitt Meadows, British Columbia, presents her take on a classic Christmas decoration.

Nagra says she was inspired to put her cultural touch on the character because she had never seen Indian inspiration before.

â€œI wanted him to look as Indian as possible,â€ said Nagra, standing next to the statue, which started out as a drawing before bringing it to life.

She says it took her and his wife about three and a half weeks to make Naseeb. It is made up of cardboard tubes called sonotubes, PVC pipes, ornaments, a bit of wood, a plastic trash can, and a few plates.

Nagra infuses his culture into many aspects of his work. In November, she collaborated with the Vancouver Canucks to create a special warm-up jersey in honor of Diwali, the festival of lights celebrated each year by millions of South Asians around the world.

The artwork.
The artist. pic.twitter.com/5qKpe1gtwJ

Nagra decided to stick with a traditional name for his nutcracker so that his children could be proud of their own name.

â€œThey both have Indian names, so the more we can surround them with Indian art and Indian culture, I hope the more confident they will feel,â€ she said.

The family asked a few people to offer to buy Naseeb, but Nagra says they are keeping it.

And for the record, Naseeb isn’t cracking the nuts yet – but Nagra plans to add the feature next year.

“Love Actually Live” – ​​a holiday gift for you in Wallis