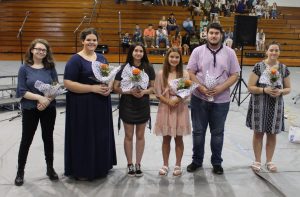 Photo by Shari Harris
Seniors from Licking High School Band and Choir were honored at the Spring Concert on Sunday. From left to right, Jennsen Vestal, Zenobia Swan, Julianne Snelling, Cadrian Hutsell, Landon Hock and Autumn Grover were recognized for their achievements.

The Licking High School Concert Band and Concert Choir and Junior High Band entertained guests with a performance on Sunday, May 1 at Sherman Hill Field House. Band and choir director Briana Link paid tribute to the main performers of the event. A visual arts showcase was also on display, featuring student work from the semester as well as award-winning artwork from the Frisco League Art Competition.

Junior High Band is made up of sixth- and seventh-grade students, in their first and second band years, respectively. They performed three selections to start Sunday’s concert, leading with “Handclap.” “Cumberland Cove Overture” followed and featured the seventh-grade instrumentalists in part of the number. An upbeat “Night Fury” ended their part of the performance.

The Concert Choir performed two of the songs they sang during a music competition, “Der Tanz” and “In Time of Silver Rain”, before ending with “Wangolo”, a Haitian song.

Artists who had attended the MSHSAA State Competition on Friday, April 29 were then introduced. The LHS Double Quartet performed “Nelly Bly,” for which they won state competition silver. “Psalm 67” was featured by LHS Girls 6 and also won a state silver medal. Oscar Phillips performed “Rudimental Solo for Snare Drum”, a bronze winner at State. The vocal solo “When I sang my songs” won a silver medal for performer Cadrian Hutsell. Dawson Havens showed his talent with “Colonial Capers”, another snare drum solo, for which he won bronze in the state competition. Autumn Grover also won silver at State for vocal solo and performed “Caro Mio Ben”.

For her assistance with the program and throughout the school year, Principal Link recognized pianist Dianne Carter, who accompanied the choir.

Senior band and choir members were recognized at the event.

Autumn Grover has been a member of the Concert Choir for three years and of The Cat’s Meow for two years. This year she was in the LHS Girls 6 and Double Quartet ensembles, and had a vocal solo, which went to State. She plans to attend the College of the Ozarks to become a teacher. She is the daughter of Lori and Byron Grover.

Landen Hock is a seven-year veteran of the band and earned a Gold rating in the MSHSAA competition last year and a 1/Exemplary Concert Band rating in the Missouri Small Bands Contest this year. A wind ensemble in which he participated received a district-level silver rating. He plans to attend Missouri S&T and major in electrical engineering. He is the son of Jory and Roxanne Hock.

Cadrian Hutsell has been with the Concert Choir and The Cat’s Meow for four years. She earned a spot in the All-District Choir for three years, sang a solo for all four years at The Cat’s Meow competition, received district and state gold grades for her solo her junior and senior years, and district and state gold grades for her. Girls 6 and Double Quartet together its first year as well as its last year. She plans to attend college at Southeast Missouri State University and major in music and psychology. She is the daughter of Calem and Stacie Hutsell.

Julianne Snelling was in the choir in her freshman year and senior year. She plans to go to college to become an X-ray technician. She is the daughter of Josef and Alaina Snelling.

Zenobia Swan has been a member of the Concert Choir and The Cat’s Meow for four years. She received District and State Gold as a member of the Girls 6 ensemble her freshman year, earned a spot in the All-District Honor Choir, and performed a solo for the Cat’s Meow at the competition in his second year. She plans to attend Paul Mitchell’s cosmetology school. She is the daughter of Doug and Candi Swan.

Jennsen Vestal has been with the Concert Choir for three and a half years and The Cat’s Meow for two years. She participated in the Girls 6 ensemble which competed in district and state competitions. She plans to work for a year and then go to university to study psychology. She is the daughter of Rob and Michelle Vestal.

The Visual Arts Showcase featured work from the second semester of high school visual arts classes. A variety of mediums and techniques were on display, with students allowed to choose their personal favorites to show.