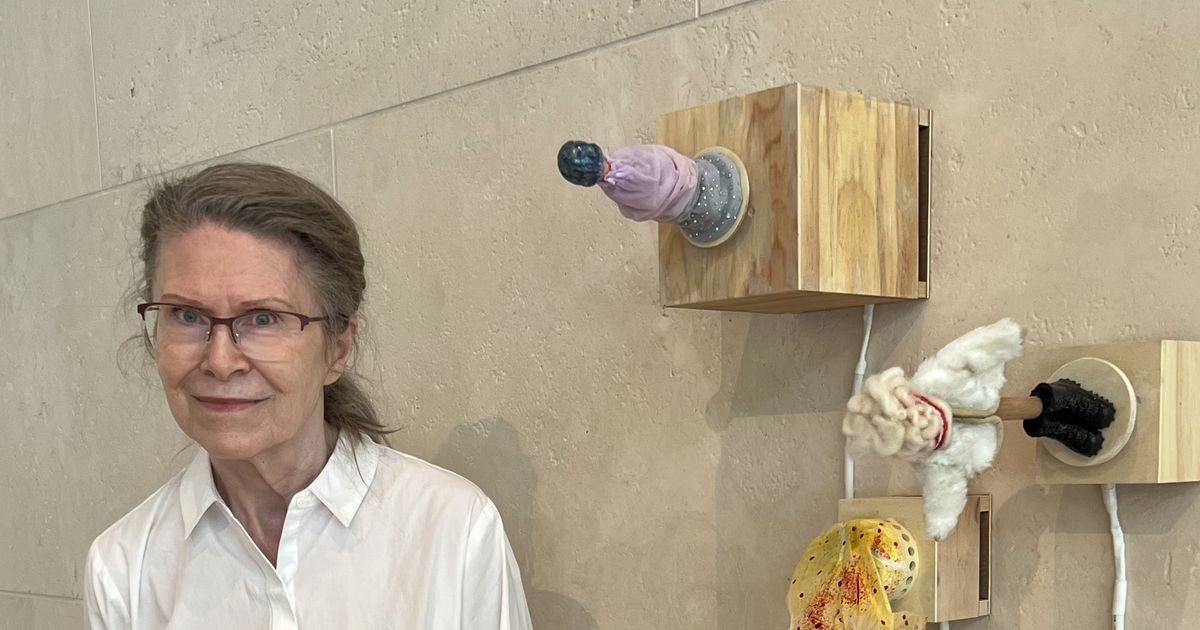 In Nasher’s “Waiting for Robot,” Celia Eberle Expresses Her Skepticism of AI

At the end of Samuel Beckett’s absurd play Waiting for Godot, the two characters who have done exactly what the title implies finally realize that they are waiting in vain. One looks at the other and says, “Well, shall we go?” The other replies, “Yes, let’s go.” But they don’t move. End of Game.

Artist Celia Eberle expects a somewhat similar interaction to take place between visitors about three times an hour each day at her “Waiting for Robot” exhibit, on view at the Nasher Sculpture Center through October 2.

Eberle, a sculptor who lives in Ennis, has spent much of the past three decades making art about the human experience, which she says “hasn’t changed much since we gained a sensibility.” . Her work, which is regularly featured at Cris Worley Fine Arts, generally explores the relationship between humans and nature, in particular the desire to control the world we live in.

In this exhibition, she is interested in the promise of artificial intelligence, or AI, which she believes, like Godot, will never fully arrive.

“That doesn’t mean the concept of AI isn’t threatening and people will even believe it’s real,” Eberle says. “But I think it’s really about the pursuit of power, which is one of the main characteristics of humans throughout history.”

To construct the show’s metaphor, she created a giant animatronic hand that spans a sea of ​​dancing, doll-sized creations that move variously and frantically to ethereal music. The display animates every 20 minutes, which means that depending on what time visitors arrive, they will likely have to wait. And then, a few minutes later, it will be over. Eberle offers no introduction or explanation, just what she calls “an end times dance party.”

“The dance party itself was sort of a reaction to the idea that in this potential future the average person is going to be replaced, so why not do the most humane thing?” said Eberle. “It’s like a jazz funeral or a hurricane party.”

When Eberle first dreamed up this exhibit in 2016, she wanted a DJ and live dancers spinning under the menacing white fingers that represent AI. But the pandemic forced her to reconsider that, which led to the little machines that move the numbers. Dancing bodies range from small porcelain figures spinning with abandon to headless clothes the size of a Barbie doll shaking like someone banging on the head at a rock concert. It’s chaotic and a little unsettling.

“They all react differently to what’s happening, which is a metaphor for the population as a whole,” says Eberle.

The final piece in the exhibit is an ethereal castle made entirely of bone – a common material in Eberle’s practice. She salvages bones from a neighbor’s cattle farm and then turns them into beautiful creations. In this case, the castle has a delicate, unearthly quality, as it floats above the sea of ​​dancers.

“It’s transcendent, it’s ascendant – the hope of being above it all,” says Eberle. “But also ascend to heaven. He waits no longer. »

Celia Eberle’s “Waiting for Robot” exhibition runs through October 2 at the Nasher Sculpture Center, 2001 Flora St., Dallas. 11 a.m. to 5 p.m. Wednesday to Sunday. Admission to the museum is $10 for adults, $7 for seniors, $5 for students and teachers, and free for children under 12. nashersculpturecenter.org.