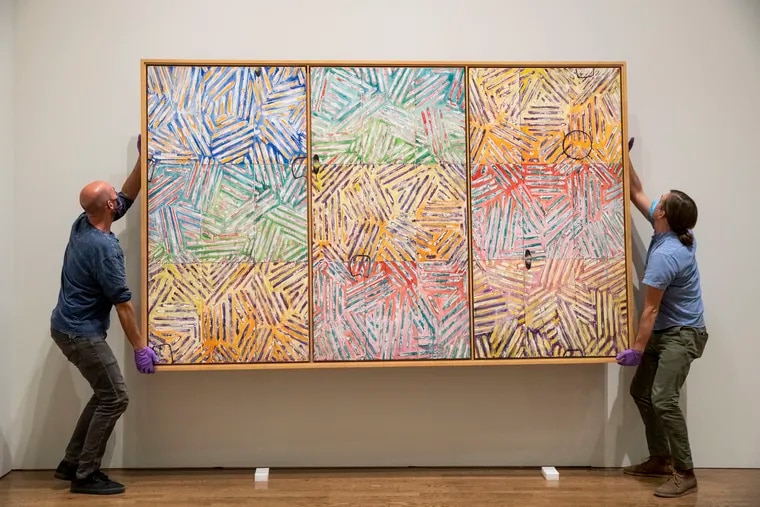 There is a ripe, autumnal aura in the work of Jasper john, now 91.

For more than 70 years, he has regularly produced sculptures, paintings and drawings, prints and books, costumes, stage sets, rubber stamps, photographs and more.

The flags and numbers thus associated with its imagery have given way to skeletal figures in recent years. But the content can still be difficult to characterize.

â€œI think you’ll have to interpret this for yourself,â€ is a typical Johnsian soft shoe beyond the intent and meaning of it all.

But while the meaning may be slippery, critical judgment has long marked Johns as one of the preeminent painters of his generation and one who is perhaps most responsible for the end of the reign of the Titans of Abstract Expressionism and the beginning of the era of the new American gods. pop and minimalist and conceptual art.

Today, in a virtually unprecedented two-museum exhibition that opens Wednesday at the Philadelphia Museum of Art and the Whitney Museum of American Art in New York City, the fruits of that career will be on display with exhaustive and epic completeness.

“Jasper Johns: Mind / Mirror” will run simultaneously in Philadelphia and New York City through February 13; it has been actively under construction for more than five years.

The co-curators of the exhibition, Carlos Basualdo, curator of contemporary art at PMA, and Scott Rothkopf, senior deputy director and chief curator of the Whitney, have amassed a wealth of works from around the world to champion their cause.

Why two exhibitions containing more than 500 works of art collectively and why New York and Philadelphia together at the same time?

On the one hand, both museums have a number of works by Johns in their collections. Johns lived and worked in New York for years, but he literally made pilgrimages to Philadelphia and PMA from the late 1950s to soak up the museum’s rich collections. Marcel Duchamp, an essential part of the museum’s Arensberg collection, and an artist Johns holds in the highest regard.

Beyond that, Johns became very attached to the late director of the art museum and champion of Duchamp, Anne d’Harnoncourt, who died in 2008. In fact, one could argue that the origins of this exhibition as it is is shown in Philadelphia at least can be found in the friendship and shared enthusiasm of the artist and the late director.

Two parallel exhibitions? Basualdo and Rothkopf were both thinking about Johns exhibitions several years ago when Basualdo suggested they both go: two simultaneous exhibitions, each complete on its own and complementing the other.

“The double space would allow us to show the work in depth, through the mediums, avoiding a show of climaxes which, in my opinion, was not enough to explain the complexity of the work,” Basualdo said the other day. Further, he added, “Scott and I felt the time had come to challenge some of the conventional wisdom around work and bring a new generation of academics to consider it.”

In a telephone interview, Rothkopf said he told Johns, presenting him with a copy of the exhibition’s brand new catalog, “‘It’s a little hard to believe, when you look at this, that only one artist has achieved. all these works â€. And he said, ‘I agree.’ “

But in the 1950s, when Johns was in his mid-twenties and had just come out of South Carolina, there was no profusion and there was no certainty as he surveyed the scenery and the artistic future. The art world was dominated by de Kooning and Pollock and their abstract expressionist brothers and no one had any idea who Jasper Johns might be. Even the great gallery owner, Leo Castelli, coming to see the studio of the lover and guide to the art world of Johns, Robert rauschenberg, had no idea Johns.

It didn’t last long, thanks to Rauschenberg, who lived in a loft above Johns on Pearl Street in Lower Manhattan. One day in 1954, Johns told her about a “crazy” dream from the night before. “How crazy was that?” “Rauschenberg asked,” according to writer Calvin Tompkins.

“Well,” replied Johns, “in this dream I was painting the American flag.” The American flag ? Rauschenberg didn’t think it was crazy at all. “It’s a very good idea,” he said.

Johns went out and acquired the makings of what would change the whole direction of art, starting with an old bed sheet and wax. The director of the Museum of Modern Art, Alfred Barr Jr., grabbed the work – an American flag – when he saw it at Johns’ first exhibition at the Castelli Gallery in 1958.

Johns didn’t stop at the flags. He continued to create targets, numbers and maps. All of them were pictures of themselves, what the artist called “things the mind already knows” – flags that were flags, numbers that were numbers, cards that were cards.

Johns’ artistic imagination found inspiration in virtually anything that was neither abstract nor expressionist – cans of Ballantine Ale, flashlights and light bulbs became bronze sculptures; the pewter cups have become elements of collage swaying on canvases, newspaper clippings.

As he incorporated these fragments of the world into his work, encouraged and inspired by his friendships with composer John Cage, choreographer Merce Cunningham and Rauschenberg, Johns made a pilgrimage to Philadelphia to admire the works of Marcel Duchamp who were part of PMA’s newly installed Arensberg collection. Duchamp’s works, such as The bride laid bare by her bachelors, even (1915-1923), also known as The Large Glass, formed a large part of the collection.

Asked about these visits, Johns said in a recent email to The Inquirer that the Arensberg collection “offers a lot of pleasures but it seemed the logical place to get acquainted with Marcel Duchamp’s work (something I wanted to do). “.

“Duchamp’s work seemed to suggest new doors to art and thought,” said Johns who first visited Philadelphia at the end of 1959, and followed many subsequent visits, especially after Anne d’Harnoncourt became the curator of 20th century art at the museum in 1971, then director in 1982.

She mounted the museum’s iconic Duchamp exhibition in 1972 and directed the artist’s last major work – the mysterious and lewd Since (1946-66) – in the PMA collection. Johns was fascinated by this piece, calling it “the strangest work of art of all museums”.

Duchamp died in 1968, but his widow then introduced Johns to d’Harnoncourt.

â€œI first met Anne in the 1970s, I think, when Teeny Duchamp brought her to my studio on Houston Street, New York,â€ Johns said. â€œAt one point in the evening, red wine was spilled on Anne’s dress and I insisted that she change into the Japanese yukata I had brought back from Tokyo, and later that she wears it at home.

â€œShe did so, reluctantly, saying her mother would be horrified. The garment was returned the following afternoon, freshly laundered.

No dirty laundry here. Just a broad exhibition, the fruit, at least in part, of a long-standing accident and a complicated chain of friendship.

â€œSometimes you fall in love with an idea because you think it’s right,â€ Basualdo said.

Trash, neon and AR coyotes at the new ICA in San Diego