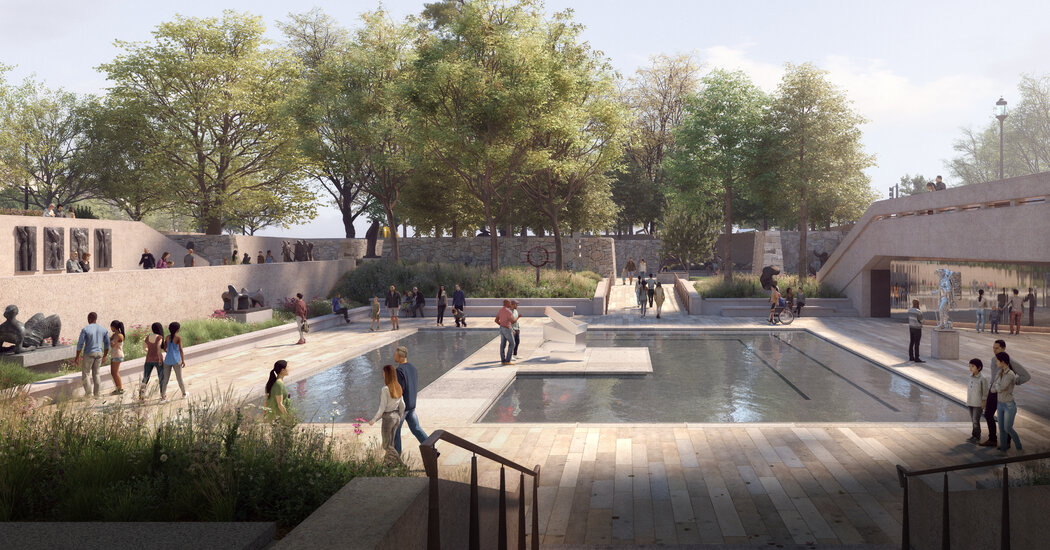 A highly controversial overhaul of the Hirshhorn Sculpture Garden by Japanese artist Hiroshi Sugimoto has passed its final hurdle in an approval process that began in 2018.

On Thursday, the National Capital Planning Commission, the federal government’s central planning agency for Washington and its surrounding region, voted in favor of the $ 60 million project. It will add open-air galleries, a new water feature and improved access to Gordon Bunshaft’s 1974 design.

â€œFrom the start of the project, we have focused on ensuring that the revitalized sculpture garden will become a local, national and international beacon,â€ Melissa Chiu, museum director, told the curators before they voted. â€œWith this new design, we are now anticipating a much larger number of visitors, offering free access to art for all. “

In 2018, the Hirshhorn Museum, home to the Smithsonian for Modern and Contemporary Art, asked Sugimoto, the Japanese conceptual artist and photographer, to reimagine his Sculpture Garden, an area below the National Mall containing works by famous artists such as Auguste Rodin, Henry Moore and Yoko Ono.

â€œWe selected Sugimoto because he has an understanding of the tradition, past and architectural heritage of the space,â€ Chiu said in an interview. â€œThroughout this process he was very collaborative and really wanted to make it an important space for artists. “

Sugimoto said in a statement that he wanted to “integrate the campus spirit of hospitality” into the architecture of the open-air galleries. He added: “I feel the same strong connection to the Hirshhorn that I experienced as an artist in 2006,” when his photograph was exhibited there, “and I look forward to seeing the campus reach its full potential. with the realization of this proposal. “

But the commission’s decision angered some landscape architecture historians who saw the beauty of the historic brutalist details of the garden by Bunshaft, who also designed the famous Round Museum.

“The DNA of the garden will be changed dramatically,” said Charles Birnbaum, President and CEO of the Cultural Landscape Foundation, in an interview this week. “We are disappointed that this foundational work is going to be changed so drastically that it will have diminished integrity.”

For the past 50 years, museum officials have struggled to make the sculpture garden work. When Bunshaft, of Skidmore, Owings and Merrill, unveiled the design, some complained that the sharp edges and scale of the garden walls eclipsed the monuments on its lawn. Reviewing the garden’s design, Ada Louise Huxtable, then an architecture critic for the New York Times, called it “so lacking in grace that it won’t end the controversy over whether it would have. had to be allowed to expand into the open green of the mall. “

Seven years later, landscape designer Lester Collins attempted to soften the space with cherry trees and new lawns. But that wasn’t enough to attract tourists who often walk through the greenery to get to the museum without noticing the world-class sculptures that dot their path. According to the Hirshhorn, only around 15% of museum visitors typically end up in the garden.

Sugimoto’s new design revamps the sculpture garden into outdoor galleries separated by stacked stone walls and includes a new water basin that can be drained and used as a performance stage. He worked with several other architects on the design, which will improve wheelchair access, introduce new plants capable of withstanding flooding, and reclaim a basement entrance to the museum from the original garden design.

Sugimoto has already altered his garden plan at the request of the Fine Arts Commission, which requested more tree cover above, and he reduced the size of his convertible pond for performance.

There were tense moments of negotiation during the design process, and in a recent interview with The New York Times, Sugimoto said he threatened to step down if his new walls were not approved. â€œDo you ask Picasso, ‘I don’t like that color blue. Let’s do it red ‘? “He said last year. He smiles at the thought of being fired:” I can be kicked out; that’s fine. “

But the 73-year-old Japanese artist has remained loyal to the project. After all, he has a long relationship with the Hirshhorn, who mounted his very first photographic investigation into his career in 2006. (In the 1970s, Sugimoto moved from commercial photography to making concept photos that dove into the strange world of taxidermy animals in museum display cases and realistic wax figures at Madame Tussauds.) Sugimoto was then asked to redesign the lobby on the ground floor of the museum; he replaced the information counter with a coffee bar and set up a table made from the roots of a 700-year-old Japanese nutmeg.

Once approved, construction on the project will begin as soon as the museum completes renovations to its plaza, said Kate Gibbs, spokesperson for Hirshhorn. The overhaul is already 60% funded and could reopen as early as 2024, which would coincide with the institution’s 50th anniversary.

“There have been many compromises along the way from all sides and an openness to new ideas and perspectives,” Daniel Sallick, Chairman of the Hirshhorn Board of Directors, said at the hearing. from the National Capital Planning Commission Thursday. “This project is certainly better today because of the public’s contribution and Hiroshi Sugimoto’s ability to effect change while keeping his larger vision of the sculpture garden intact.”

Last December, critics of the project lodged a complaint with the Office of the Inspector General of the Smithsonian, alleging that museum officials pressured contractors to file letters of support for the redesign and suggesting that these actions constituted consideration. â€œSmithsonian contractors would have felt pressured or obligated to provide the requested approval,â€ Birnbaum, of the Cultural Landscape Foundation, wrote in the letter, which was reviewed by The Times.

But with final approval from federal officials, staff at Hirshhorn are eagerly awaiting their new garden.

â€œWe are very happy with the result,â€ said Chiu. “It was about transforming the sculpture garden into a space capable of keeping pace with today’s artists.”