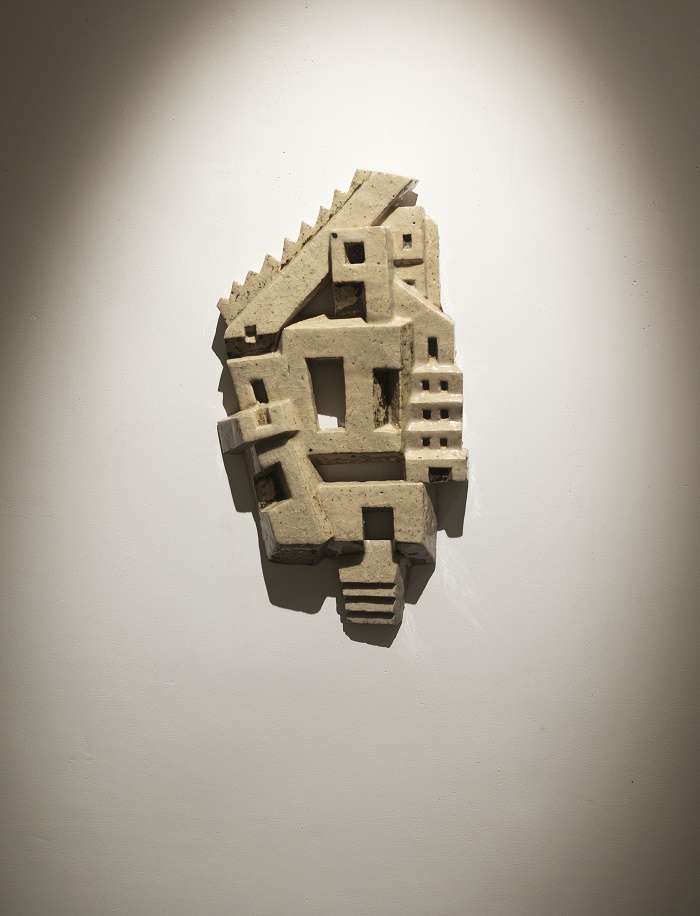 Kaee Contemporary bustles with Kolkata’s avant-garde scene, straddling exhibitions that examine and subvert historical and artistic narratives. After presenting the deeply introspective presentation of paintings by Jayashree Chakravarty and stunning sculptures by Radhika Agrawal, Adwait Singh now traverses the depth and breadth of two Delhi artists, Gigi Scaria and Jagannath Panda, in the second part of his conservation.

Gigi Scaria’s ceramic works and her installation in Kaee reveal feelings of vulnerability, longing and draw on human experience and insights from the collective consciousness.

His ceramic pieces, created at the historic ART ICOHL in Malhar, take the form of stage settings, depicting urban contexts as well as everyday spaces that evoke his own subconscious.

If the outstretched small branches of a tree include the themes of history, memory and the legacy of the way of life of the human figures in the veil, the work titled Bundled is a masterpiece in the cultural complexities and the undulation of rustic rhythms.

Gigi creates connotations largely derived from millennial observations and he recreates his small images as if they appear in haunting interiors as dreamlike or cinematic vignettes.

His installation Lockdown is another masterpiece created in a confluence of architectural dimensions, depicting empty, uninhabited skyscraper spaces in a vertical vignette. All painted and perfectly created, the emptiness of the installation speaks to the aftermath of life after the pandemic. Gigi is known for framing his installations as a global transmitter of style and substance beyond national geographies. The beauty of this installation lies in the fact that it is animated by human contradictions between the irrational and the rational, in particular in key ideas or moments that defined periods of urban habitation struggles for the idea of paradise won and lost.

The 3 birds of Jagannath

Two paintings and a powerful installation feature the three birds of Jagannath Panda. At first misleading, they are loaded with dialogues and inner meanings. His two large paintings present a stimulating and transnational approach to the metaphorical associations of man and his many avatars.

There are tensions that manifest in Jagannath’s paintings through a confluence of realism and representation that extends into myriad commentaries and backdrops.

His two paintings The Custodian of Untold Truth I & II are an amalgamation of imagery, color and perspective that form a three-dimensional manifestation of his style of painting. Bold and gritty, the two birds become a symbolic gesture revealing political paradigms and the inner workings of the artist’s mind and process. Jagannath continues his exploration of the abstract backdrops of urban dwellings, he also adds layering forms and gesture painting techniques to create intricate images intertwined with art historical narratives.

His installation Profiteer is a magical blend of materials like furniture wood and other exotic rudiments that come together to create an enchanting whole. From his solo exhibitions at Vadehras in Delhi, we see how he connects the beauty of man and nature to create a commentary that is seamless in his sculptural installations. In Profiteering and The Custodian of Untold Truth, Panda illustrates the inherent paradoxes of India’s burgeoning development and prosperity.

Asked about his use of birds and animals in his sculptures and paintings, he replied to this reviewer: “Animals and birds become extensions of man in my sculptures,” says Panda, “They depict psychology and human behavior. I use simple and direct images and represent them in a naturalistic way. When I simulate and magnify the bird’s head as a bust/or tall installation, I’m alluding to power structures in society. I explore my concerns about urbanization and dislocation, social and economic injustice, and corporate greed is a key part of this. If you look closely I used fabric and painted decorative designs like this.

Profiteer is an installation built to frame a way of looking, essentially bridging the gap between three-dimensional space and the two-dimensional picture plane. The intention to convey the idea of ​​monopoly and corrupting domination evokes human presence and emphasizes Jagannath’s meditation on intellectual and philosophical history while critiquing the political and academic aesthetic defining the everyday idioms.

The success of this double unveiling by two brilliant artists merges and extends historical installation techniques, displaying both the mastery and the gestural manipulation of paint/glaze/materials indebted to the association of images through time and space to activate their symbolic meanings – to drive the conceptual components of their works.

The opinions expressed above are those of the author.

From the battlefields of Iraq to the music scene of Nashville, how a Navy veteran uses art to heal