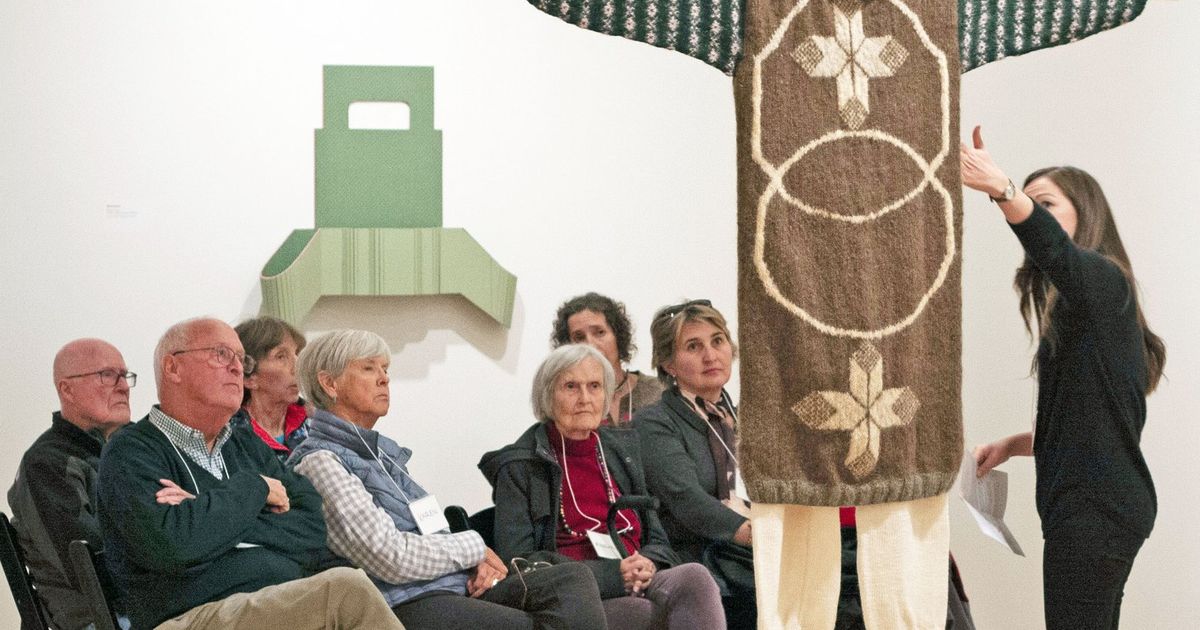 A&E Pick of the Week

On a cold February afternoon, sunlight streams through the windows of the Frye Museum of Art, drawing attention to the playful shapes and colors on display. On one wall hangs a bright blue and orange painting done, in part, by Margot Hughes-McDonald.

Here, in the “Art on the Mind” exhibition, 77-year-old Hughes-McDonald does not have dementia. She is an artist.

“Art on the Mind: Ten Years of Creative Aging” marks a decade of Creative Aging, a series of free creative engagement programs at Frye that empower people with dementia to foster friendships and community through art – the first of its kind in Washington state, according to the Frye. Since November 2020, the exhibition features works of art created by people with dementia and their care partners.

The exhibit’s creators aimed to share people’s stories and de-stigmatize what it means to have dementia, said Mary Jane Knecht, Creative Aging programs manager. As the exhibition nears its closing date, April 3, Knecht believes they have succeeded.

“I think it really has an impact on how people view people with dementia,” she said. “We have received many more requests for volunteers for the program. It really had a ripple effect.

Research into creative aging began 12 years ago and was inspired by a similar program at the Museum of Modern Art in New York, according to Knecht. Creative Aging started with here:now, a free art-making and discussion course that “celebrates present-moment awareness,” according to Frye’s website.

Since then, the Frye has added Bridges, an offsite program where educators visit homes or care facilities to accommodate people with advanced dementia or who may have mobility issues. The museum also offers Meet Me at the Movies, which includes a film screening followed by a discussion with the public.

Hughes-McDonald attends Creative Aging with her daughter, Kirsten Kinnan. Kinnan said her mother had always been very creative and that these classes allowed Hughes-McDonald to express herself freely.

“She was always an artist, she was always drawn to it,” Kinnan said. “What’s been delightful about this program is that it taps into muscle memory. It’s like riding a bike. It’s something she sees – and I believe real artists are intuitive – and so it just comes out.

Randy Rowland attended several creative aging classes with his wife, Kay Grant Powers, before his death in 2019. A Powers watercolor created in a Here: Now class in 2016 is on display in the “Art on the Mind” exhibit.

“My wife refused for a long time and I hadn’t seen her operate at this level for a while. And then all of a sudden there she was, getting poetic and talking about the painting we’re looking at,” he said.

For Rowland and Powers, classes were a great way to date and socialize. Rowland specifically praised the here: now format and the focus on the present moment, which he said benefited them both.

“You don’t have to have an art degree, you have no memory. It’s what you see, and how you feel. It’s all in the present,” he said. “That’s kind of what my wife and I tried to do, to deal with her decline, is to keep life in the present. … And this program helped us stay where we’re supposed to be, instead of to fall off the cliff.

Throughout a decade of creative aging, the Frye has had an ongoing partnership with UW Medicine’s Memory and Brain Wellness Center. This month, that partnership will expand with the opening of the Memory Hub, a dementia-focused senior center on the Frye campus.

One of Frye’s and Memory Hub’s missions is to challenge misconceptions about dementia. Memory Center director Marigrace Becker gave examples of two harmful but common misconceptions, the first being that people with dementia are “gone”. Although dementia can change someone, Becker said, they are still alive, there and worth knowing.

Another misconception that Creative Aging has debunked is that if a person with dementia can’t remember a moment, there’s no point in creating it. But a moment of comfort or companionship, even if forgotten, can impact mental well-being, Becker said.

“It may be true that they won’t remember it, but the emotional impact that happened during that exchange, during that time in the moment, is tough,” Becker said. “Moments are what make up our lives, and people with dementia can live up to 20 years. So that’s a lot of moments that may as well be high quality.

“Art in the Spirit: Ten Years of Creative Aging”