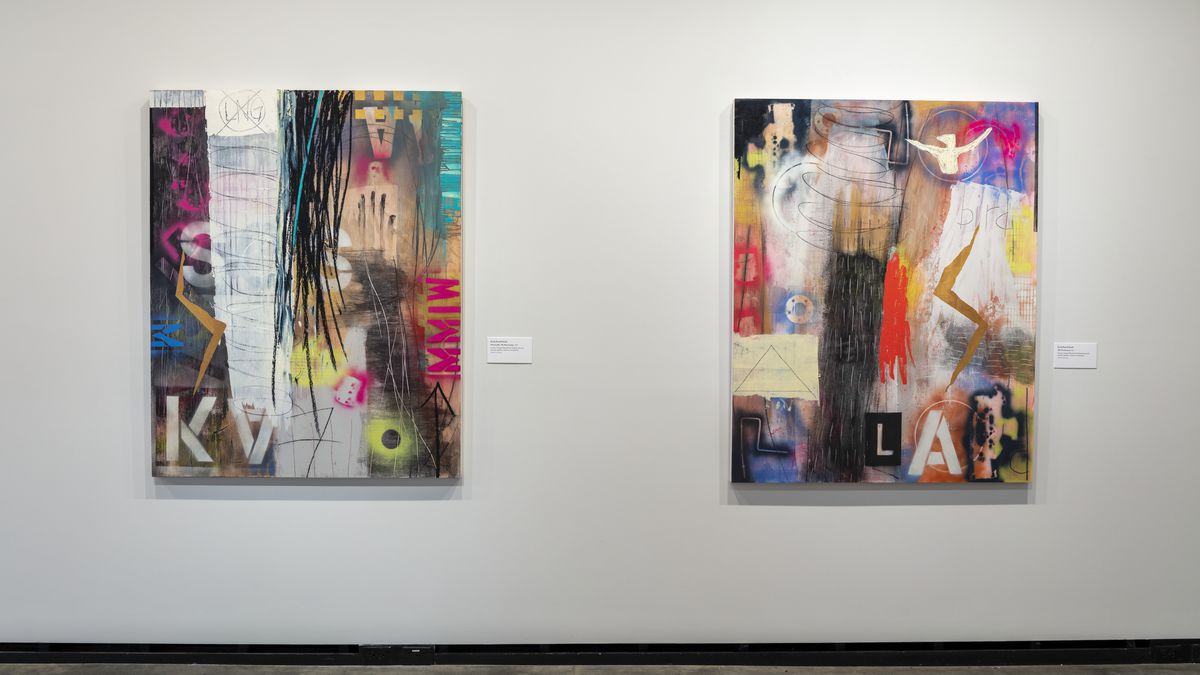 She is a member of the Klamath tribes and lives in Modoc Point, Oregon. When asked how history influences his work, the answer spans over 150 years of white colonization and indigenous struggles in the West:

It evokes the Modocs War of 1862, when the Modoc warlords resisted US government forces for seven months in southeast Oregon and northern California. It refers to the Termination Act of 1954, when the federal government ended recognition of the Klamath tribes. She talks about the Indian Residential Schools that her father Alfred Leo Smith attended and his advocacy that led to the signing of the 1994 Amendments to the American Indian Religious Freedom Act.

Farrell-Smith is one of four contemporary Indigenous artists featured in the new show MESH at the Portland Art Museum. His works in the exhibition are part of a series of 27 paintings titled Return from land, named after the contemporary movement that advocates Indigenous sovereignty.

In the paintings, these historical traumas are communicated both emotionally, through abstract forms and vivid colors, and through words and images. In the table titled State of torture, it represents a character dressed in an orange jumpsuit and a black hood, evoking the prisoners of the war against terrorism.

“The US government lynched four Modoc warlords, and my great-great-grandmother Emma Ball was nine and was forced to watch this,” Farrell-Smith said. “During the Bush and Cheney administration, their lawyer John C. Yoo cited the hanging of Modoc warlords as a legal precedent to create the 2003 torture program, which led to the opening of Guantanamo Bay.

The art and artists that must be seen

Kathleen Ash-Milby, curator of Native American art at the Portland Art Museum, said this intensity drew her to Farrell-Smith’s work.

“These aren’t necessarily happy paintings,” Ash-Milby said. “The topics are very heavy, but they’re also beautiful. I think this combination of beauty and passion, the depth of thought and the content behind it is what really got me excited about show works from this series.

This is the first exhibition Ash-Milby has organized at the museum as a curator of Native American art. She says she was drawn to the four featured artists because she believed their messages of Indigenous resistance against colonization and activism deserved a wider audience.

“I really feel like my role as a curator of Native American art is to bring attention to the art and the artists that need to be seen,” she says.

Ash-Milby also chose to feature New Mexico artist Lynnette Haozous. She is Chiricahua Apache and a member of the Apache tribe of San Carlos, with the Diné and Taos Pueblo heritage. For MESH, Haozous created In the sun, a large mural of an Apache woman participating in her sunrise ceremony. “Lynette described this mural as an act of ‘reinstating’ the Portland Art Museum,” Ash-Milby said. “It reaffirms the presence of native people and native women by installing this temporary mural.”

Mesh’s works address the history of racial injustice and indigenous land rights in never-before-seen ways, such as the luminous photographs of Leah Rose Kolakowski and the hand-threshed bark of Lehuauakea. It is not always an easy balance to find.

Farrell-Smith says her work is also influenced by the activism of which she is a part today. She is deeply engaged in resistance to a 229-mile-long gas pipeline and LNG export terminal through her family’s ancestral lands in Oregon. Last year, in protest, she publicly refused to have her art displayed in Gov. Kate Brown’s office.

“It’s a difficult thing to navigate,” said Farrell-Smith, “because in the art world we’re dealing with capitalism, corporate sales and activism. It’s a balance. between creating a platform and then leveraging it like I did with the governor’s office to say, no, I’m not going to hang my art in this space. You want to arm it and use it to to get the results you want, or to reinforce the awareness that needs to be brought to this fight against the pipeline. ”

Farrell-Smith says she had a big smile on her face the day the company behind the development formally asked federal energy regulators to withdraw permits for the proposed project, but the fight was far from over. to be finished. She was already in Winnemucca, Nevada, organizing against a lithium mine the Bureau of Land Management had approved nearby.

“I’m starting over,” she laughed, “in a different state.”

But just as the struggle for Indigenous sovereignty doesn’t end with a small victory, the artistic collaboration doesn’t end once the paintings reach the gallery wall. Farrell-Smith says she’s already talking with Haozous – whom she met at the show – about new collaborations. Haozous was involved in the fight against a copper mine in Oak Flat, Arizona. They plan to use the In the sun mural of MESH to raise awareness of the threat of mining on indigenous lands across the country.

“I want to unite,” said Farrell-Smith, “and I think that image of her would be really powerful.”

MESH is exhibited at Portland Art Museum until May 8, 2022

How to prepare for the IMO 7 class?