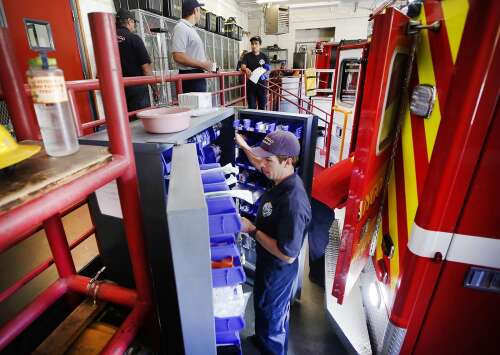 Durango Fire Protection District firefighter Allen Ottman grabs medical supplies Sept. 21 from a cabinet in the bay of Downtown Fire Station No. 2. Durango City Council on Tuesday approved a memorandum of understanding between DPFD and the city to explore the possibility of constructing a new fire hall at River City Hall in lieu of the Durango School District‘s 9-R Administration Building. (Jerry McBride/Durango Herald file)

The City of Durango and the Durango Fire Protection District have approved a Memorandum of Understanding to explore the use of the River Town Hall site as a downtown fire station.

The memorandum of understanding states that the city and fire district have bi-weekly meetings to review negotiations, ask questions and provide the public with updates simultaneously.

Durango City Manager Josè Madrigal said the city and district council of firefighters are trying to “check all the boxes” through the memorandum to keep the public and the two public entities up to date on the progress of negotiations. During negotiations, DPFD agreed not to pursue any land use applications, construction plans or tenders for a downtown fire station in the Durango School District’s 9-R Administration Building.

According to the memorandum of understanding, the city and fire department will also initiate design ideas and gather public input on concept site plans for a redeveloped fire hall at River City Hall.

Madrigal said the memorandum of understanding gives the city and firefighters a year to review River Town Hall with the option for either party to terminate the agreement with written notice from 45 days. In order to withdraw from the memorandum within 14 days of written notification, the fire district and city council must hold a joint meeting to consider options for resolving any deadlocks.

DFPD leader Hal Doughty said he was encouraged by the memorandum of understanding. He said a potential issue with the River Town Hall site is the floodplain, and the fire district needs to determine its ability to build a facility “that could weather a 100-year flood and still be functional.” and continue”.

He said an earlier concern was also about radioactive mine tailings at the site, but after an environmental study by the city, that may not present as big of an issue as expected.

But the first things that need to be worked out between the fire district and the city are a timeline and making sure the city receives fair market value for the River Town Hall property, whether it’s leased, sold or transferred to the Fire District, and ensure that the Fire District gets back what it paid for the 9-R Administration Building.

Other items to address as the city and fire district explore their options include designing a facility large enough to accommodate the fire district’s equipment and ensuring the new station fits in aesthetically. downtown, Doughty said.

He remains interested in exploring the possibility of sharing a building with the Durango Police Department.

“We have searched for the past six years and (have been) unable to find a suitable site,” he said. Now DPFD has “tethers in two different locations that could potentially replace our downtown fire and police stations.”

Doughty said what happened to the 9-R administration building remained in question. The fire district offered to allow the school district to use Big Picture High School for another school year and allowed the school administration to continue working out of the historic 9-R building.

“And so we still have good use,” Doughty said. “School property will continue to be used…for at least another school year. And we’re going to work very hard with the city to see if we can make it work. And if we can, so much the better. And if we can’t, we’ll focus our attention on school property.