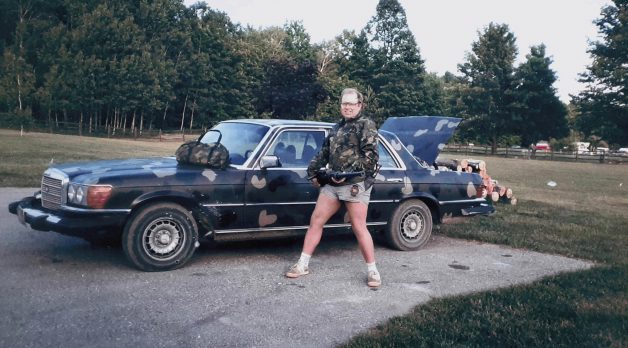 2nd chance continues director Ramin Bahrani’s interest in people on the margins of society who pursue the American dream. The documentary examines the case of Richard Davis, a bankrupt pizzeria owner who invented the bulletproof vest, only to find his reputation tarnished after a faulty product leads to the death of a police officer. Below, cinematographer Adam Stone explains how the plot of the subject led him to take a hands-off approach that emphasized character and storytelling over style.

Director: How and why did you become the director of photography for your film? What factors and attributes led you to be hired for this position?

Rock: I believe I was hired for this position because Ramin and I have worked together in the past and are old film school friends. We also work well together and have many of the same sensibilities. I was beyond excited when Ramin asked me to shoot the project.

Director: What were your artistic goals on this film, and how did you achieve them? How did you want your cinematography to enhance the film’s storytelling and the treatment of its characters?

Rock: To be honest, I wanted the cinematography to take a back seat to the story and the main character. I have done so many stylized documents in the past and felt I had to take 2nd chance in a different direction.

Director: Were there any specific influences on your cinematography, whether it was from other films, or visual art, photography or something else?

Rock: The work of Errol Morris and Werner Herzog often returned in pre-production. As mentioned above, we wanted simple visuals that moved the story forward without distracting the viewer.

Director: What were the biggest challenges in producing these goals?

Rock: Wildly, the production was a breeze. The schedule, locations and production team made filming super relaxing and enjoyable. If there was any doubt. I would have liked to have had more one-on-one time with the main character.

Director: What camera did you shoot with? Why did you choose the camera you made? What glasses did you use?

Rock: I shot the project on two Panavised Red Monstros with extended Panavision C and E anamorphics. I like the combination of camera and lenses. The end result is painterly, authentic and strangely majestic. My favorite lens was an old 40mm E-series. The drop, anamorphic curvature, and distortion were insane. I loved it for landscapes and interviews.

Director: Describe your approach to lighting.

Rock: It certainly wasn’t rocket science. Literally had a great source with a throwback twist and called it a day.

Director: What was the most difficult scene to achieve and why? And how did you do?

Rock: Everything was super easy to shoot. The only thing that caused me a bit of consternation was shooting a B-roll all alone in the middle of a blizzard.

Director: Finally, describe the finish of the film. How much of your look was “prepared” versus done in the DI?

Rock: The film’s timing was pretty traditional and there wasn’t much to do, just a bit of sweetness and tweaking.