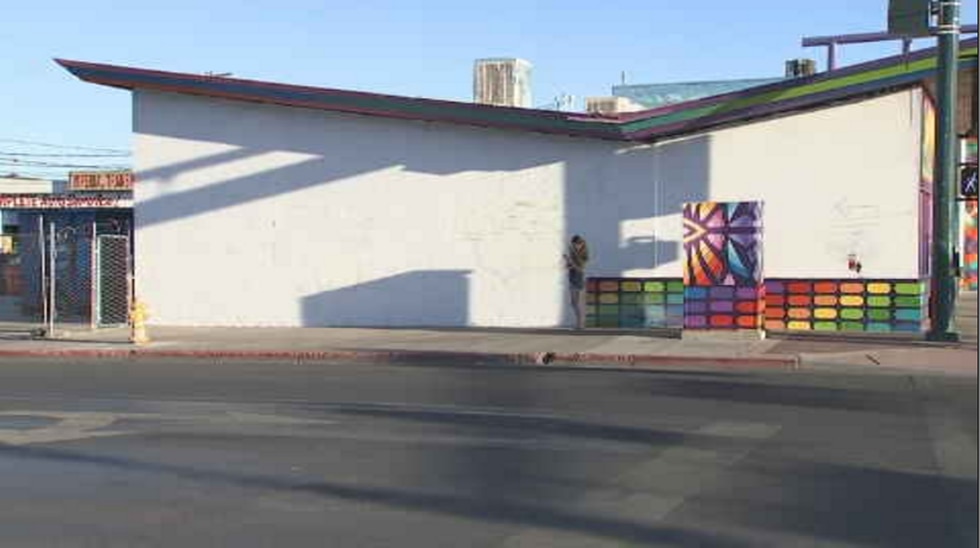 Could the arts district become a “blank slate”? Concerns grow after the destruction of a mural

LAS VEGAS, Nev. (FOX5) – Residents and businesses in the downtown arts district are increasingly concerned that art is leaving Las Vegas, after a beloved mural was painted over and possibly destroyed for real.

The mural commissioned by renowned artist Xavi Panneton at the corner of Main Street and Imperial Avenue was suddenly covered in white paint. According to a now-deleted post from advertising company Visionary Walls, an ad was planned for the space instead.

“It gives me a lot of life and joy to create this. This mural will bring joy to the community and help define the spirit of the neighborhood. I was immediately extremely hurt and disappointed,” Panneton said, telling FOX5 that he was not informed of the mural’s impending destruction.

An owner on Clark County records for the building in the 1400 block of South Main Street said he recently sold part of the building to someone else two months ago and had called the mural “magnificent”. He was unable to provide the name of the new owner and the real estate agent who oversaw the transaction.

I’m friends with a lot of local artists, and it’s sad to hear when they say they’re worried they can’t afford to be there. They represent the arts district,” Panneton said.

FOX5 recently told you how independent artists are being forced out of the Arts District due to rising rents of up to 400% and changing ownership by corporate investors.

The situation has outraged neighbors such as Nevada Brew Works. Owner Lauren Taylor has taken to social media to raise awareness of the plight of art in the Arts District. “They covered such an iconic masterpiece of art with an advertisement. It hurts my soul. It hurts our community,” Taylor said.

“The fresco in question was painted on private property. Thus, the owner of this private property can decide whether he wishes to keep the mural or not. The mural in question was not a partnership between the city and the property owner. Murals are a big part of the downtown Las Vegas vibe and we’ve seen many of them go up in partnership with Life is Beautiful, and before that, the City of Las Vegas Centennial Celebration. It is an organic process where artists and owners work together to create works of public art. The city supports public art, but aside from city-sponsored projects through the Las Vegas Arts Commission, the city’s role is to ensure that all applicable city codes are followed.

According to Fennemore Law, there are federal rules governing murals and artists in the Visual Artists Rights Act of 1990, or VARA, and published an awareness article.

FOX5 inquired with the author, attorney Mario Vasta, about protecting artists in downtown Las Vegas. He answered our following questions:

Does a mural artist have a claim for protection under VARA? Do they need copyright for VARA protection?

Generally, yes, the Visual Artist Rights Act (“VARA”) grants rights to authors of visual art, including muralists. A person acquires a copyright when they create a work of art without needing to formally register the copyright (although formal registration offers more extensive rights). Under VARA, a mural artist has the right to prevent “intentional distortion, mutilation, or alteration” of the artwork, among other rights. In the absence of a signed agreement whereby the artist grants a building owner the right to destroy or alter the work, that owner may not have the right to do so and should seek legal advice. before acting, under penalty of being held liable for significant damage.

There are many murals around downtown Las Vegas. What rights do artists have or don’t they have?

In addition to the comments above, the artist is also entitled to receive notice from the owner of the property on which the artist’s work was created that the owner intends to move the work from art, assuming such removal can be made without destroying art. In this case, the owner must attempt to give notice, and then the artist has 90 days to remove the work. This does not apply if the work cannot be removed without destruction, in which case, as stated above, the owner should be careful because if he does not have permission from the artist to destroy the work, the owner could potentially be subject to significant damage.