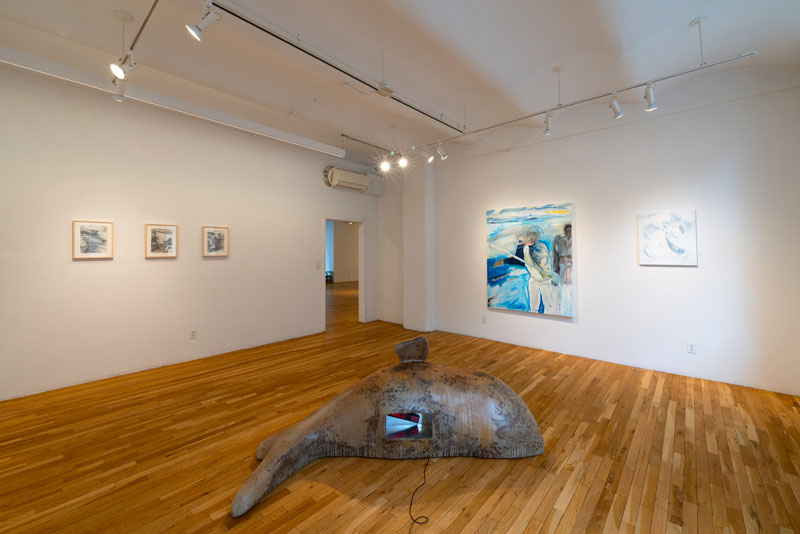 It is difficult to present an interdisciplinary group exhibition where the individual pieces form a rational whole. Bungalow’s second nomadic exhibition in the gallery space of Westbeth Artist Housing handles this difficult task, successfully adopting a varied yet cohesive curatorial approach. Fifteen artists are featured with minimal contextualization, encouraging organic connections to develop between the objects. A relaxed but never lazy interplay of ideas, embracing conceptual art, interior design, fashion and still life, exists in a harmonious display of seemingly disparate works.

Founded in 2021, Bungalow is a traveling collaborative curatorial project undertaken by Saria Sakka, Quinn Schoen and Abigail Tisch, with all three members contributing to the group’s varied interests. Scrolling through Westbeth’s four-room gallery, it is at first difficult to distinguish the thematic scores, but eventually it becomes clear that each room accomplishes something specific. The first gallery has the largest area and showcases works that make efficient use of the vast space. Furniture from Cairo-based designer Don Tanani is a main focal point, with three large pieces within the room. The titled designer’s 6-foot-long undulating bench Special Ouroboros (2022) consists of parallel tubes of black and blue grained oak wood, seated irresistibly between function and form. Tanani also brings a sultry wooden console with winged hand carved oak inlays mounted on the wall, which set the tone for a homey feeling throughout the display. I couldn’t help but imagine the pleasure of laying my keys on the surface of such a beautiful object after returning home.

In contrast, a series of large repetitive paintings at the back of the first room has “The Whitney Biennial 2022” painted in different explosive and garish colors with identical 3D bubble letter typography. The tacky aesthetic of these images feels like a nostalgic throwback to early 2000s pop culture misconception. They also remind us of Westbeth’s geographic proximity to the Whitney, whose 2022 Biennale is currently on view. With six 40 x 50-inch special editions displayed next to each other, these light-hearted but conceptual works by Thomas Blair read like a cheeky Warholesque meditation on the redundant and often stereotypical nature of repeating exhibitions or art fairs. regularly.

The playful nature of Blair’s work continues in the second room, where Louis Osmosis’ raw stainless steel sculpture of a beached whale anchors the middle of the room. Failed (2022) features a rusty patina and an almost human scale, making it endearingly sympathetic, posed on the gallery floors. A receding LED text display is also hidden in a mirrored square cavity in the stomach of the sculpture, the hard-to-read bright red text adding a startling allure to the artwork. Surrounding the whale are charcoal drawings and oil paintings by Idris Salaam, which feature sketchy renderings of out-of-focus figures in ambiguous scenes that are equally difficult to pin down. ostinato (2022) shatters this illegibility with a clear, soothing top-down oil painting of a snow angel. Salaam’s delicate use of the lightest whites and blues simulates the experience of coming across such an angel on the street just after a new layer of snow. The works included in the second room juxtapose the static mass of the grounded sculpture of Osmosis and the dynamism found in the rough outline of Salaam’s suspended two-dimensional works, but all suggest ambiguous narratives that resist easy explanation. .

The domestic experience is highlighted in the third gallery, which dovetails well with Westbeth’s historic role as a provider of affordable housing and studio space for artists since the 1970s. the room had a rack full of trendy products that looked like they were for sale. This trunk show was dropped after an educational roundtable hosted by Bungalow, where attendees received NFTs for discounts and behind-the-scenes apparel information. The shop was set against a beautiful ceramic lamp by Shane Gabier, a multi-colored grid painting impasto with accumulations of tactile pigments by Abby Robinson and a curved circular oak chair by Don Tanani. On the opposite wall we find Aniza-Imán Íñiguez’s large-scale, succulent, otherworldly painting of an orange against a calm blue mountain horizon, and an ethereal airbrush rendering of a lily by Takayuki Fukuda. The unusual combination of clothing, furniture and still life creates an inviting sense of ease and tranquility that speaks to the breadth of Bungalow’s conservation aims.

The final room features works by Lebanese ceramicist Lina Shamma with vessels sitting on pedestals in the center of the gallery and ceramic mirrors hung on the walls. These reflective surfaces are beautifully lined with glazed and fired clay. A row of individual hand mirrors on one wall, for example, each have unique handles adorned with delicate ceramic floral borders. Here, Shamma’s craftsmanship embraces the imperfect in the wonderfully uneven contours of handmade earthenware. A hanging mirror was wrapped in clay with rows of holes removed from the surface to reveal parts of the mirror in uneven circular shapes below. The honeycomb arrangement of the circles created a fractured and fascinating reflection.

While continuing to emphasize the design and domesticity seen throughout the exhibition, the arrangement of Shamma’s work resembled his own solo exhibition. It even featured a unique wall tag and title not present in the other rooms, which explained that this part of the exhibition was made in collaboration with House of Today, a non-profit organization that helps support Lebanese designers. . While this certainly didn’t detract from the elegant craftsmanship of Shamma’s ceramics, the difference in presentation moved away from the exhibition model of presenting various works of art with little context. This decision seemed to be a significant deviation from Bungalow’s generous curatorial decision to avoid the handhold often found in the didactics of the exhibition. Despite this, Bungalow’s second exhibition offered a distinctly enriching experience through an abundance of vibrant works that, despite their wide range, clearly articulate the distinct identity of the collaborative curatorial project.

AMoA is hosting the artafterdark event this Friday