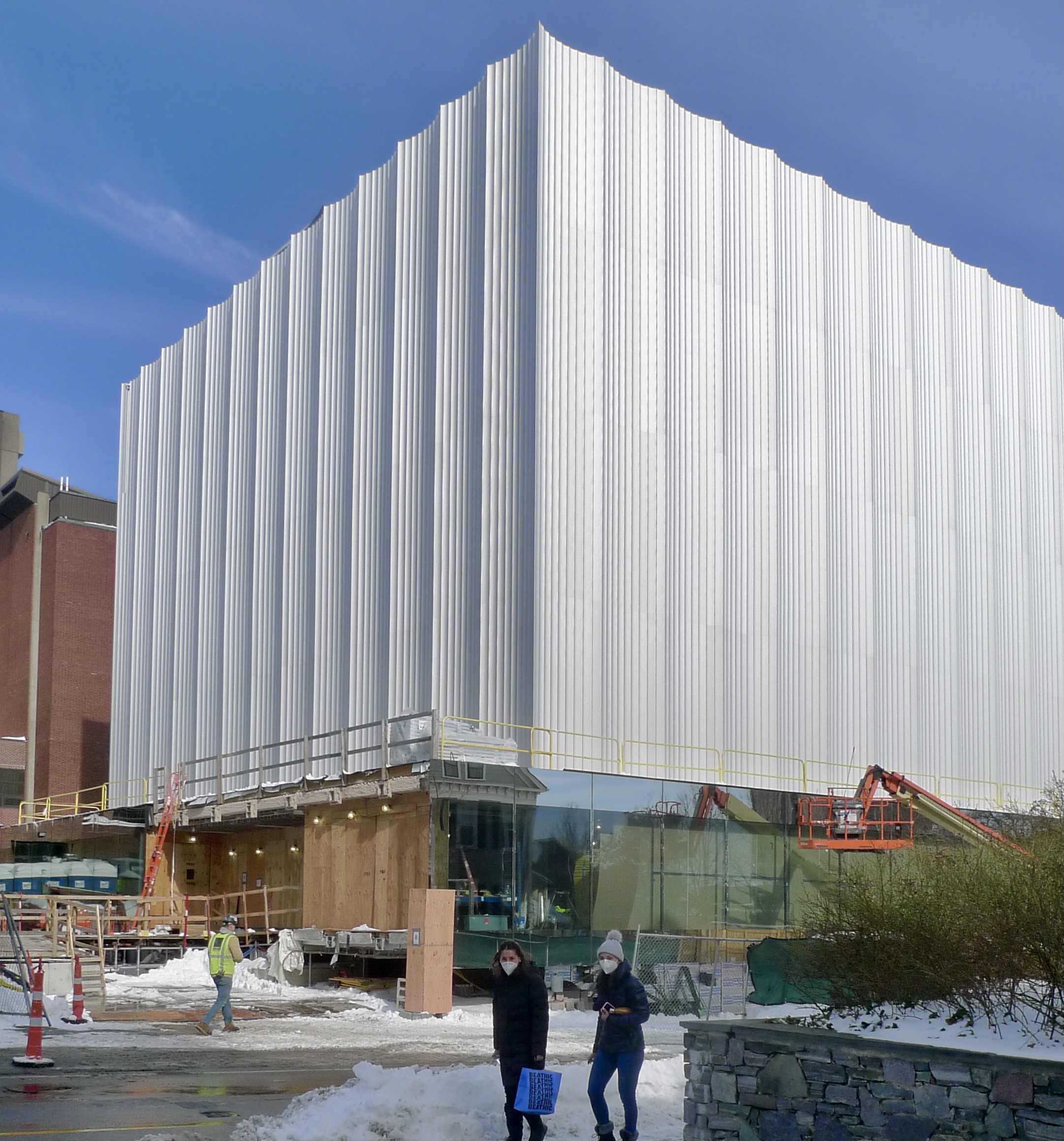 The most anticipated, confusing, and perhaps most despised new building on the East Side of Providence is the Brown University Performing Arts Center (PAC). Scheduled for completion next year, it remains to be seen how it will fare as a theatre/drama/music space. The architects of the building, REX, claim that the PAC “invents a new typology of the arts”. REX also believes that “architecture should do things, not just represent things”.

What is now just a mysterious oversized block of faceted aluminum can, in fact, do some pretty exciting things in its 118,000 square foot whole. The PAC will offer five stage and audience configurations in one space. “The six surfaces of its shoebox-like main hall,” note the architects, “are physically and acoustically modulated through automated and manually assisted performance equipment.” (Translation: This expensive structure will be costly to maintain.)

The space will be flexible with seating gantries, retractable acoustic curtains and stage lifts, so Brown should be able to do almost anything with performance art, from traditional to experimental. In its various forms, there can be 350 seats for recitals, 250 seats for dance, theater and opera, and up to 650 participants for a full orchestra. The massive superstructure needed to carry all this magic requires complicated machinery and a lot of manpower; configuration changes take ten seconds on the architect’s website, but four days in real time.

REX is an architectural firm. Having parted ways with architectural bad boy Rem Koolhaas, Esquire magazine called REX frontman Joshua Ramos “one of the best and the brightest.” REX is known for its bold geometric shapes and intriguing surface patterns – a kind of flashy one-trick pony. Their Ronald O. Perelman Performing Arts Center at the World Trade Center, for example, is very similar to Brown’s PAC, which is not surprising since it has the same donor. Called by the New York Times the ‘king of debt’, the Revlon mogul’s name will no doubt be redacted to Brown, as he is from the Princeton college he donated but is unable to make the payments.

For all the fancy equipment and the lure of an enriched cultural scene on campus, the new PAC looks very much like an alien intruder into the tight cityscape of College Hill. “It’s like the Shell station that was here could reappear with just as much sense of place,” said Kip McMahan, RISD graduate and campus architect at the University of Wisconsin. And, as noted by Kim Salerno, an architect and urban planner who recently moved to Benefit Street, “white, silver and cool colors contrast sharply with the warm, earthy hues of the Hill. Even the granite on the Hill is hot.

For many, the PAC portrays Brown as an ungrateful tyrant in a neighborhood whose history and attractiveness are integral to the university’s identity and success. A longtime neighbor calls the arts center an “abomination” and notes that it “represents everything that is wrong with Brown.” As has been made clear for decades, Brown has little interest in respecting and protecting his College Hill habitat if he interferes with his expansion. There are so many places where PAC would have been more appropriate, yet the donor apparently demanded this central site, albeit absurdly overbuilt. The relentless mass of the PAC is about as subtle as a dancing hippo in a tutu.

The PAC reminds us that Brown, to his credit, hires exceptional architects, especially when compared to the insulting and unremarkable aesthetic of the developers employed on Lot 195 and elsewhere downtown. But too often, Brown doesn’t give these designers enough freedom to use their talents to their best advantage.

A major architectural work in Brown by a major design firm: the new Kieran Timberlake Engineering Building. PHOTO: Will Morgan

The characteristically dramatic REX gesture of a horizontal slice interrupting the vertical thrust of the building is also a major shortcoming. Although this contrasting glazed floor provides a great vantage point from which patrons can observe the campus, this floating plinth resulted in an awkward entrance and constricted main hall.

However, as a design taken out of context, the monumental PAC has the proportions of a Greek temple, while the fluted aluminum mantel performs better than many of the perforated textured surfaces that adorn other REX boxes. The Brown Arts Building, despite itself, is almost elegant.

But a structure at the center of a crowded college campus is not a stand-alone work of art. As Kim Salerno said, “A jewelry box is good, but will the urban gestures measure up?” I asked the former member of the Newport planning board to give us her opinion on the PAC. “I love the new building materials, surfaces and textures,” she replied, “and I love the icy quality of the design, but I really want to see how the new architecture relates to the old .”

In the case of Brown’s Performing Arts Center, this is irrelevant. What it does is raise the question of whether Brown is succeeding in bringing together his artistic identity? Or is the university simply buying its bona fides with fashionable architecture pushed by consultants who should know better?

As the architects’ website dishonestly states, “REX dares to be stupid.” But it was Brown who was so naïve that he was sold this white elephant disguised as a piece of modern architecture.

The Sharpe House was moved to make way for the PAC. PHOTO: Will Morgan

William Morgan spent much of his life on college campuses, including Princeton, Dartmouth, Columbia, and Oxford. He has written extensively on collegiate architecture