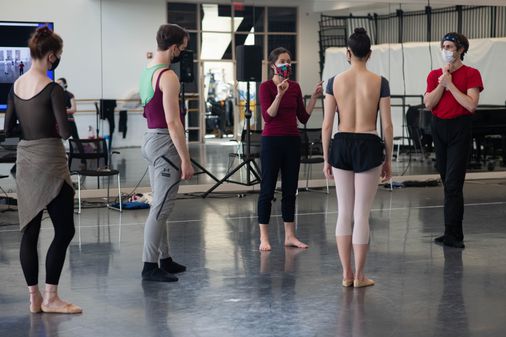 “It’s about identifying and cultivating talent,” says Boston Ballet Artistic Director Mikko Nissinen. “We have made a concerted effort to provide access from the earliest stages…creating space for diverse voices and very different ways of approaching the art form of dance. It means an open mind to let the ballet go where it wants to go. And that’s only the first mile.

Three of the designs infuse classic cutting-edge work with contemporary influences. Superstar ballerina Tiler Peck brings the culture and heritage of New York City Ballet to its “starting point”, inspired by the music of Caroline Shaw. This is his first opportunity to choreograph in a large company. “My energy is so stressed as a lead dancer that I thought I would never have time to choreograph,” she says, calling “ChoreograpHER” just the boost she needed — it helped that premieres rehearsals can take place via Zoom during pandemic downtime. “I love mapping movement onto my own body, but as soon as I walk into the room with the dancers, it becomes theirs, a real collaboration, an ongoing conversation.”

Choreographer-in-Residence at Atlanta Ballet Claudia Schreier has created over 30 ballets for various companies and is known for fusing neoclassical ballet technique with the grounded physicality of modern dance. His “Split Screen” for 18 dancers explores the concept of constant momentum. The ballet of spikes is set to music on a score by Tanner Porter inspired by bee communities. “So there’s a nod to nature, community, and different facets of self,” Schreier says.

Lia Cirio, one of Boston Ballet’s most accomplished principal dancers, has been part of the ‘ChoreograpHER’ project from the start, but this program marks the first time the company will perform her choreography on a subscription series on the main stage. . (In addition to choreographing for the program, she will also perform in works by Peck and Schreier.) Cirio says her “Chaptered in Fragments” for three women on pointe and four men “…is kind of all I like to dance. It’s neo-classical, with hints of Forsythe and Kylian influence, but with a quirkiness that is very much like me.

By contrast, Melissa Toogood eschews toe shoes for slippers and brings deep roots in American modern dance to her first major choreography. A rehearsal and dancer with Pam Tanowitz Dance, Toogood has performed with the Merce Cunningham Dance Company and taught the Cunningham Technique around the world. Her sextet, set to a score commissioned by Boston musician Jeff Klein, is titled “Butterflies Don’t Write Books,” a line from the Mary Oliver essay she was reading when she started the piece. “Because I’m new to choreography, I wanted to free myself from the final product and focus on the creative process,” she says, exploring the concepts of space, time, texture and structure in relation to the spontaneity.

Although each premiere is unique, it is Martin’s work that, according to principal dancer Patrick Yocum, is “completely different from anything we have done before. Her art is full of freedom, fantasy and spontaneity, so she encouraged us to do that,” he says. Set to music by John Adams, Martin’s “Kites” is a metaphor for something uplifting, light and playful, its string representing a kind of tether between past and present as well as a thread connecting the sequences of movements that the dancers generated in response to the catalog of words, lines and characters that Martin uses in his visual art. “I asked them to move through what the words sound like in different combinations, and I put those moments together to piece them together in different patterns,” she says.

Yocum, who also dances in Peck and Toogood’s choreography, says it’s very rare in the ballet world to see an evening of five premieres. For the audience, he says, it should be a fascinating sample, and for the dancers it has been both a challenge and a pleasure. “It’s so much fun to change [rehearsals] during the day, so refreshing,” he says. “And it forced us out of a perspective we’re used to to learn something new and grow as artists. It’s about accepting the unexpected and making it your own.

And for choreographers, it’s an encouraging commitment from Boston Ballet to increase opportunities, access and visibility for creative women. Martin says, “It brings so much energy, inspiration and innovation to this art form, and I think we could all do more with it.”

Karen Campbell can be reached at [email protected]

The interest on my tax debt is accumulating. Should I pay it back with a loan?