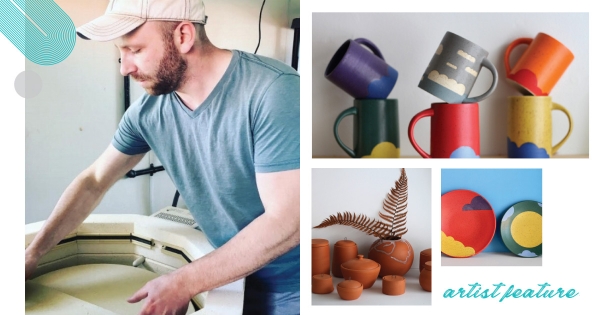 Jeff Ham didn’t grow up pottery, but it’s been his professional life for five years.

He grew up on a century-old family farm just outside of Grand Rapids, learning to love and work with the things of the land. Now he continues that tradition with pottery, which began with a course at Grand Rapids Community College, leading to a studio at The Grand Rapids Pottery, not to mention a job of working and learning under the direction of the owner. Then in 2017 he started attending bigger art fairs and pottery became a full-time job.

Ham’s ceramics have won plenty of fans for the bright colors, thick textures and striking imagery, but he’s also done quite a bit of wholesale work for clients like Stoffer Home and Archival Brewing – especially since the pandemic has put a… pause on art exhibitions. Want yours? Keep an eye on Ham’s Facebook and website for updates on upcoming retail this fall.

We spoke with Ham about his art as he painted his new home with partner and fellow GR artist Jeffrey Augustine Songco.

You work on both direct selling and wholesale art – does that feel different to you?

It’s sort of this inverse relationship between stability and creativity. A lot of the big work is cohesive and provides stability, but there’s not a ton of creativity going into it, because you’re sort of in production mode at this point. While the more ad hoc work I do, the more risk I take because it’s not a proven product, but it’s also much more creatively fulfilling.

I’ve always loved doing things and solving problems creatively, and I love that clay has a down to earth feel and sensuality to it. I mean, I grew up on a small working farm, so I always think about the values ​​my dad had, having a relationship with the land. It feels like an extension of that, in that I’m making something out of nothing.

Your work has been displaying some striking imagery lately – can you tell us a bit more about your style?

My pre-pandemic work was very inspired by nature, then after the pandemic I started to focus more on patterns and layering. Specifically, I was looking at a lot of textile resources, different textile patterns. And with my direct selling job at the moment, I mostly work with stencils, so I have a vinyl plotter and I do patterns with that software and cut stencils. It’s not a real trompe-l’oeil, like, I’m not trying to make my ceramics look like fabric. But I’m inspired by textile design right now.

Since I’m doing so much wholesale right now, I don’t really need to have a separate direct sales line like before. It gives me the freedom to try a bunch of different ideas and only do three; because at the end of the day, if they don’t sell, it doesn’t really matter. Although I’m not doing as much creativity as I would like right now, I have a bit more creative freedom at the same time. We’re all still trying to figure out how to be in a post-pandemic world, and my pottery hasn’t figured out what it wants to be yet.

What’s it like to be part of the Grand Rapids art scene?

I should probably mention that I also co-own The Grand Rapids Pottery right now. Me and two other members bought this from the founder three years ago, so I also run this studio. In this way, I am very involved in the community and actively encourage it with Grand Rapids Pottery. It was super rewarding. And like any self-proclaimed artist, I have a network and an affinity with other people who make art. And I think Grand Rapids is a small enough community that it’s easy to know a lot of people who can help you or want to generate new ideas with you.

Hopes for the future?

I participated in a few collective exhibitions around pottery, and always in mind, I would like to continue to develop this. I hope to build like a wood burning oven here in Allendale and want to have community shots for it. So that’s sort of a short-term goal right now. And then, I don’t know, continue to survive?