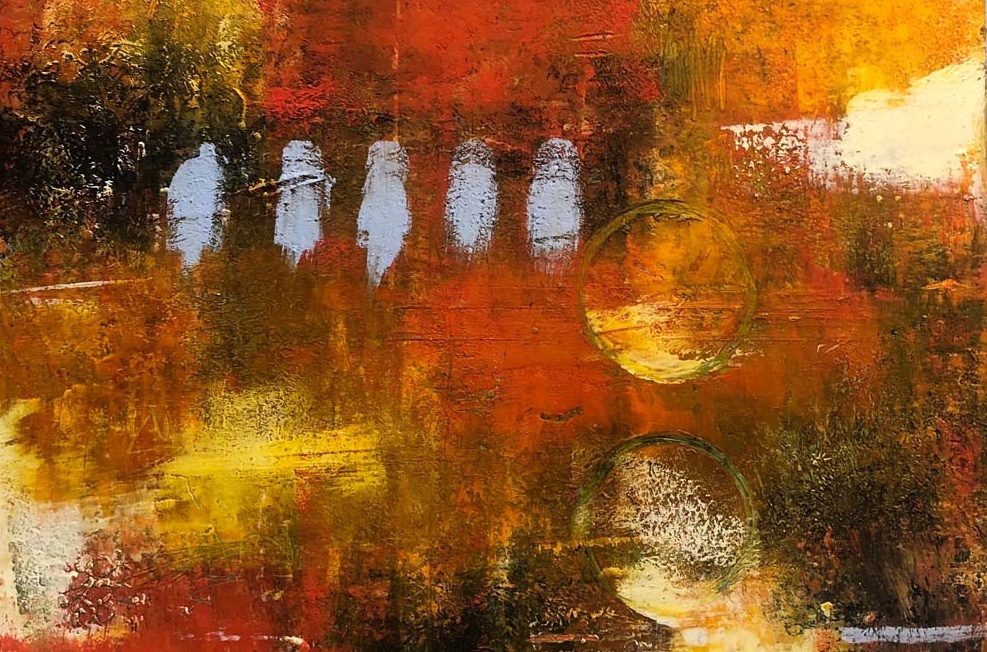 The grand, if still slightly underrated, reopening of ArtSpan’s month-long open studios continues, this weekend encompassing the large studio community of 1890 Bryant Street, among others, for studio tours and tours. brought together (and hidden!) With the work of artists. I met one of Bryant’s 1890 artists, DK Haas, who has been participating since 2005, to explain why, after a one-year hiatus from all viewing art, this installment of Open Studios feels absolutely necessary.

“The first challenge everyone felt during the pandemic was that everyone’s shows were being canceled, in all the arts,” Haas told me over the phone, recalling what seems like a century ago but was in fact less than 18 months. “The mayor issues this shelter-in-place order, and you’re like, ‘Woah, what’s going on?’ It is your job, your livelihood, you have invested everything to create and show your work. Now it’s canceled, and it’s all covered in this ghostly veil of anxiety and sickness. And now?

“I think a lot of us have stopped,” Haas said. “Everyone was panicking. It was too painful at that time to paint, to photograph, to make art. I myself caught COVID and I was very sick for months, I developed a long COVID. And when I finally started painting again, I was painting things that I didn’t even particularly identify with. I was like, ‘Huh, a flower.’ In a way, it was liberating, even though my painting was getting very dark. There was a painting I did when I was so mad at everything that was completely foreign to me. I called it ‘Fuck COVID.’ I was embarrassed about it, in a way, because I’m never so direct with what I do. I’m used to keeping the crazy woman inside me a secret!

“But you can’t paint or do art in a vacuum, especially when your own reaction to what you’ve done is ‘What is this?’ Creating and viewing art is part of a conversation. This conversation is riddled with what’s going on politically, socially, economically – and now it’s mostly about COVID, which encompasses all of these things, all of these fears and feelings that we have to deal with. But it’s still a conversation, and it gets things done.

“In the spring, when things were going better, I invited people to my studio. Four meetings over two days. We have a large gallery space. I installed a sofa and a bench. I put oranges, satsumas, and cans of sparkling water, so no one has to touch each other. And the people sat down and didn’t move. They were so hungry, ”Haas said.

“This is also the advantage of Open Studios. You have an audience, you don’t do art in a vacuum. I love 1890 Bryant. The caliber of the art, the community, the way the community comes together to organize this event, people should know this is the place for everything. It is a wonderful experience to walk there. The giant halls are beautiful and clean. The conversation continues. This has to continue one way or another, or I think there will be more harm to the health of the community. ”

SAVE COMMITMENT TL’s trusty late-night Grubstake dinner, with its Portuguese-Californian touch of sparkle (don’t miss the caldo verde), is usually where I would end up after a crazy day like the one I had at Sunday’s Folsom Megahood Fair. Like many weird and rambling monuments, the adorable restaurant in a little red train carriage is in dire need of an update. Co-owner Jimmy Consos wants to demolish the place and build an eight-story, 21-unit “middle-income apartment building”, with a replica of Grubstake on the ground floor.

Residents of the neighboring 103-unit building oppose Grubstake’s plans, already approved but changed in the development process, and have filed an appeal, submitting letters complaining that it would block their light. It’s one of those complicated situations and the development is now in limbo.

This Monday – yes, the morning after Folsom, so there was no way I was doing it in person – some of the biggest drag queens and LGBTQ boosters in town (Juanita More, Donna Satchet, Gary Virginia) hosted a rally supporting the Grubstake plan, a rare example of LGBT activists advocating for development in a traditionally queer neighborhood ravaged by gentrification. (Maybe in SF saving a historic burger would mean hangover drag queens pleading for an already approved development they probably can’t afford to live in.)

More wrote to me: “I have been a resident of District 3 and a customer of The Grubstake for 30 years and have a strong connection to the history and legacy of Polk Gulch because this neighborhood is where I am. released as a teenager.

“I also fully support the new construction project proposed by Grubstake. And I’m excited to hear that the new building will provide 21 units of middle income housing above the reconstructed restaurant, which will benefit the neighborhood and the community.

“Help us save and rebuild this iconic restaurant and its legacy as part of the LGBTQ + community,” said More. She posted here for more information about her mission. I just wish the accommodation was for all the neighborhood night owls that I love to meet at Grubstake, eating their burgers and drinks.

COWABUNGA, MECS Probably the thing that excites me the most in the world as a very, very young Gen-Xer stoner is the return of the infamous Simpsons Trivia Night on Sun / 3 from the always-on team Everything Ecstatic, and this time it’s a real doozy: They hold it at the Mission Bowling Club (yes, you can take a track) and also with a full Simpsons themed menu.

According to the organizers: “It’s not just a trivia night, we also have a very special Simpsons themed menu, cocktails (yes, the Flaming Moe specials will be back as well as the ‘Duff Beer’). ), super cool prizes, episodes between games and even VIP bowling lanes. To celebrate this momentous achievement in the realm of excellence, the dinner and drink menu for the evening will feature Simpsons dishes inspired by the terribly outrageous Laurel Randolph The Unofficial Simpsons Cookbook. It’s a fantastic cookbook with LEGIT recipes for your favorite Simpsonian foods like Steamed Hams, Meat Buns, Sloppy Jimbo and even a Space Age Waffle. We’ll be giving away cookbooks and bottles of Uncle Moe’s Hobo Secret Spices (among other cromulent prizes) to celebrate the book’s release in the Bay Area and this must-see feature. Sun / 3, 5:30 p.m. to 9 p.m. More info here.

SAM / 2 COMMUNITY PARADE AND COMMEMORATIVE CELEBRATION OF POET JACK HIRSCHMAN Jack Hirschman passed away on August 22, 2021. He spent most of his productive life as a poet, painter, translator, and community organizer based in the tight-knit North Beach neighborhood of San Francisco. His most trusted comrades and admirers relatives held a festive procession and an open-air memorial as a fitting celebration of his life and work. In many ways, Jack was the poetic engine of the city and supported novice poets to the most famous, from the local internationally known. His major work, The arcana, three volumes of 126 poems spanning 34 years, is the most prolific production of an American poet since Pablo Neruda. He was the fourth San Francisco Poet Laureate and was the creator of the International Poetry Festival which brought together poets from around the world, helping to make San Francisco the “City of Poets”. The free celebration will be open to everyone and will include performances at some of his local hangouts in North Beach, culminating in a formal program at Washing Square Park. Admirers are encouraged to bring items to be included in the community altar at Specs’ Bar.

SAM / 2 AS YOU LIKE IT 11 YEARS OLD We are truly fortunate to have a regular techno night, As You Like It, filled every time with mind-blowing lineup. This one is extra: Classic techno pioneer Robert Hood performs with his daughter Lyric as ecstatic house duo Floorplan, unsung Detroit creator Claude Young and Todd “The God” Edwards of New Jersey, whose big beats and chopped samples revolutionized the sound of the 90s. At Public Works. More info here.

SAM / 2 PREMIERE OF THE “COWBOY” FILM “Cowboy is a portrait of Wilbert Freeman McAlister, President of the Oakland Black Cowboy Association (OBCA). Through the film, we follow Wilbert from the dusty fields of the Central Valley through the Oakland cityscapes as he traces his life’s path of self-discovery, personal loss, and community education. The film will premiere at the historic Eli’s Mile High Club in Oakland. The event will include a screening of the film, a question-and-answer session with Wilbert and the filmmakers, a performance by Cowboy And His Sometimes Blues Band, a raffle with donations from local businesses, a DJ performance. While the event is a celebration of Wilbert and the film’s release, it is also a crucial fundraiser for the OBCA which has had to cancel its annual parade, its main fundraising event, these past two years due to COVID. All proceeds from ticket sales, raffle tickets and 20% of food / drink sales will be donated to the OBCA to help them continue their mission of educating the public about the often overlooked role of cowboys African Americans. More info here.

SAM / 2 8 YEAR ANNIVERSARY BIKES TO BOOKS HIKING “It’s a party and you are all invited! Our 7.1 mile literary San Francisco bike tour combines San Francisco history, art, literature, cycling and urban exploration – an entertaining and unique way to celebrate the literary and adventurous spirit of San Francisco. In 2013, we created Bikes to Books as a tribute to the 1988 street naming project led by City Lights Books founder and former San Francisco poet laureate Lawrence Ferlinghetti, in which 12 streets in San Francisco were renamed for famous artists and authors who made San Francisco their home. Celebrate eight years of Bike to Books, 33 years of street names and over 150 years of literary history from San Francisco, from South Park to North Beach, from Jack London to Jack Kerouac. Meet on the north side of Jack London in South Park at 12:45 pm. More info here.

SUN / 3 CASTRO STREET FAIR The unofficial start of fall for gays (everyone is invited though!), This lovely outdoor walk fills the air with fun music, drag performances, and all the rainbow windsocks and male torso art that you can take home from vendor booths. Hope they’ve kept my favorite part out of COVID: the country line dance scene that was once tucked away behind the Castro Theater. Yeah ! More information here.

Capital One Hall is ready for grand opening weekend