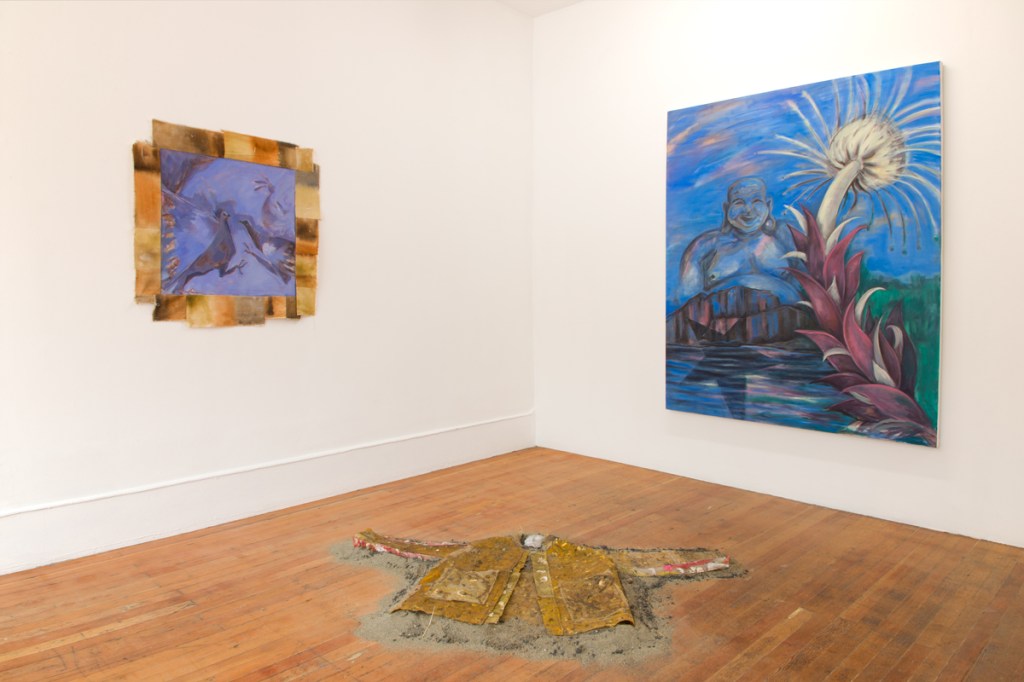 For a glimpse of what lies ahead as the art world looks to the future, ARTnews devoted part of the June-July 2021 issue of the magazine to 10 cities to watch: Philadelphia, Atlanta, Vancouver, Guadalajara, BogotÃ¡, Oslo, Tallinn, Casablanca, Abu Dhabi and Taipei. Stay tuned as each city will be joining the Seoul and Paris related reports online in the coming weeks.

Vancouver, the idyllic coastal destination in southwestern Canada, owes much of its artistic heritage to the artist-run centers that began decades ago and continue to be among the city’s most important institutions today. ‘hui. In recent years, as artists have faced the rising cost of living, various institutions have come together in a spirit of camaraderie and collaboration to help keep the creative community thriving. The story of Vancouver’s arts community, whose ranks include Emily Carr, Stan Douglas, Brian Jungen, Ian Wallace, and Ken Lum, is a story of kinship and support amid changes and intersecting challenges.

Vancouver’s most significant art dates back in many ways to the creation of artist-run spaces in the 1970s. western front, one of the most important institutions of its kind, was founded by eight artists in 1973 and has since become known for its engagement in poetry, music, media arts, etc. Regarding the Space Mission, Executive Director Susan Gibb said that â€œher goal has always been, above all, to support artists. In the future, it will also be a question of reaffirming this support. “

Notable recent Western Front activities include an online exhibition of the work of artist and researcher Jawa El Khash and a live performance by Autumn Knight. On the horizon, a planned renovation of its historic 100-year-old building in 2022, funded in part by the Community Economic Recovery Infrastructure Program (CERIP) of the province of British Columbia.

Artspeak, another artists’ organization dedicated to interdisciplinary reflection, was founded in 1986 with the mission of “fostering a dialogue between visual arts and writing”. From the start, Artspeak shared space with the local Kootenay Writing School, and the organization has since its inception presented a wide range of exhibitions, talks, and readings by artists and writers. â€œIt was born out of a collective need to share space,â€ said director and curator Bopha Chhay of the origins of Artspeak, â€œbut also to provide space for the development of ideas. Artspeak maintains both exhibition and publishing programs, and Chhay today highlighted a particular focus on ways in which the language arts could be used to address the institution’s position in unceded territory. of the Musqueam, Squamish and Tsleil-Waututh First Nations.

Also playing a key role in Vancouver, grunts gallery, artist-run center founded in 1984 and devoted to a “history [that] was really defined by the focus on performance art and contemporary Aboriginal art, queer artists and artists of color, â€according to program director Vanessa Kwan. â€œIt has always been a place where different types of practices have been welcome. Artists the gallery has showcased include TsÄ“mÄ Igharas, Marlene Yuen, Gabi Dao and Rebecca Belmore, and recent initiatives have involved discussions and presentations with emerging Indigenous artists, and community workshops on captioning, transcription. and non-auditory access.

A more recent but equally influential organization in Vancouver is 221A, which began in 2005 as a student initiative focused on the fusion of contemporary art and design practices. Informed by its roots in the city’s Chinatown, 221A has undergone several transformations since its founding, moving in 2017 from an exhibition-centric platform to a scholarship program. Jesse McKee, chief strategy officer at 221A, said the scholarship model serves the organization’s goal of “working with people over long periods of time to develop new types of cultural infrastructure.”

As rising house prices and perpetually low salaries for artists make Vancouver less welcoming to the burgeoning creative class (as has happened in so many other cities), local energy has been devoted to creative ways to nurture the community. â€œWe are really suffering from the fact that people cannot afford to work and live here,â€ said Vanessa Kwan, director of the Grunt gallery. Efforts to build coalitions and networks to support emerging practices include collective studio spaces like Duplex, which was established in 2015 and is run on a voluntary basis with an emphasis on supporting the practices of emerging artists and interdisciplinary and experimental practices.

As the pandemic has exacerbated inequalities in Vancouver, self-help initiatives have become central to the arts scene. WePress, a community arts space in Vancouver’s Downtown Eastside, established a community kitchen to distribute meals to organizations such as the Aboriginal Front Door, Overdose Prevention Society, and Western Aboriginal Harm Reduction Society. the Sectoral equity for the fight against racism in the arts (SEARA) is an ongoing effort to provide financial support to BIPOC artists based in British Columbia through donations from the public, arts organizations and private donors. Among the members of the initiative’s steering committee are
personalities like Brian McBay, executive director of 221A; Michelle Jacques, chief curator of the Art Gallery of Greater Victoria; and artist and designer Sierra Tasi Baker.

Tom hsu, a photographer who lives and works in Vancouver and has exhibited in several galleries around the city, said that Vancouver’s “dense community of artists” is one of Vancouver’s greatest strengths, as is their common tendency to “help each other â€Thanks to access to kinds of mutual aid.

Catriona jeffries has since 1994 cultivated a reputation for strength behind one of Canada’s foremost galleries, while drawing inspiration from the history of artist-run spaces in Vancouver. â€œThey are extremely important to the ecosystem of this place,â€ Jeffries said of the roots of his namesake gallery, which now represents artists including Geoffrey Farmer, Brian Jungen, Damian Moppett, and Rebecca brewer. â€œMy gallery emerges from a critical position and a different structural perspective. A lot of the artists I work with also come from the self-managed artist culture. “

The artist-centric spirit that defined the city also influenced new business outfits like Unit 17, a gallery founded in 2017 with a focus on emerging artists. Founder Tobin Gibson said Unit 17 favors artists whose â€œpractices have been hiddenâ€ over others who have already gained attention. Some of the artists who have shown with Unit 17 include Gabi Dao, Gabrielle L’Hirondelle Hill, and geetha thurairajah, and Gibson said there’s always more. â€œWe feel very lucky to be able to work in a place where so many types of artists work. Even though Vancouver is at the end of the world, it is still able to engage with other centers.

Sarah Macaulay, who owns and operates Macaulay & Co. Fine Arts, said that many artists “do work for their peers rather than for a market to some extent.” Macaulay represents artists whose Lawrence Paul Yuxweluptun Letslo: tseitun and Walter Scott, and she developed two other projects: Ceremonial / Art, dedicated to the exhibition of works by indigenous artists; and Phone gallery, launched in 2020 to allow artists to stage a one-month solo exhibition and then select the next exhibitor. Macaulay said the postponement of the selection process allows “to experience a whole different kind of art scene in Vancouver that I may be disconnected from,” acknowledging how galleries can be too engrossed in their program to spy on burgeoning talent. .

The new era of an institution

90 year old man Vancouver Art Gallery, one of Western Canada’s largest art museums, entered a new phase in 2020, when Anthony Kiendl took the helm as director and CEO, and last May he opened the second edition of a survey-style exhibit known as Vancouver Special, which continues until the beginning of 2022. Series centered on local artistic practices and intended to take place every three to five years, the first iteration of the show, in 2016, took the title â€œAmbivalent Pleasuresâ€ and attracted attention. A review in the Globe and Mail described it as “thick with discoveries”, with “works as diverse as the artists who made them”. The current edition, entitled “DÃ©sorientations et echos”, presents some thirty artists, including Simranpreet Anand, Lacie Burning, Odera Igbokwe, and Lam wong. Diana Freundl, curator and associate director of the Vancouver Art Gallery, said the exhibition is a â€œsnapshotâ€ of artistic practices that have emerged in recent years in a city that is â€œchanging rapidlyâ€.

An even bigger update is on the horizon for the museum: A fundraising campaign is underway for a new building designed by Herzog & de Meuron and Perkins + Will, with construction plans that could start as early as January 2022. The building was designed to provide accessibility, inclusiveness, and environmental sustainability, and planned features include classrooms for school programs and a dedicated space for the Institute of Asian Art. Kiendl, the director, said he saw the present moment as “a very promising opportunity to reinvent what an art museum is”.

A version of this article appears in the June / July 2021 issue of ARTnews, under the title “The Collaboration Station: Vancouver, Canada”.