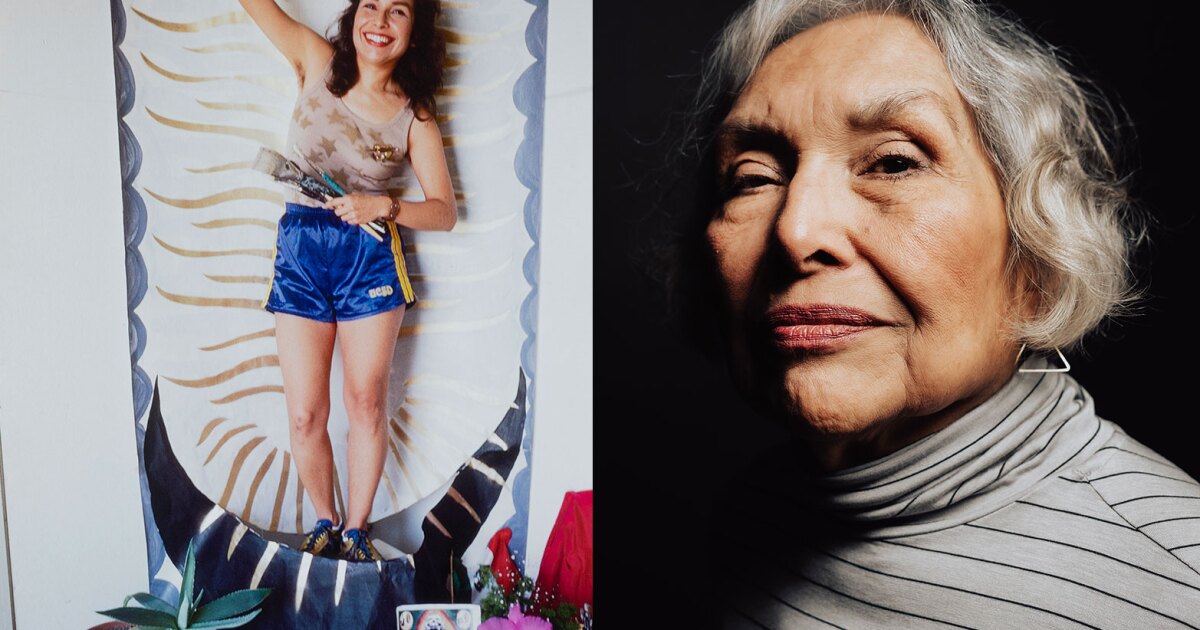 “Always in her youth and in her hunger”: Yolanda López at MCASD

Just six weeks after the deaths of the San Diego-born Chicana artists and activists, you’ll land at Lopez, San Diego’s museum of contemporary art. We’ll reopen this weekend with an exhibition of Lopez’s work, surprisingly the first solo museum show in his long and celebrated career. Jill Dawsey, curator of the Museum of Contemporary Arts in San Diego, spoke with KPBS writer and artistic producer Julia Dickson Evans. And we hear from artists and curators like Sandra Moctezuma and Latitia Gomez Franco.

I want to start with the deep impact of Yolanda Lopez starting with Latisha Gomez, Franco, who is the executive director of the Bubba Art Conservation Center, which has also curated works by Lopez in the past.

One of my favorite visions of Yolanda Lopez has always been the photograph of herself inside the developmental mind of Viacom, just the look on her face and still imagining her in her usefulness and in her, her hunger and her eagerness and that, and that passion that she always had, but to try to get me, you know, I still think, what would I have done if I had lived in the 70s and the height of the movement chicano, what role would I have played? Uh, and I love to imagine myself as Yolanda Lopez, young and dynamic. Uh, but I’m, I’m really excited to see, uh, her, we can do a loop, uh, series, uh, because these are the first of her pieces that I’ve seen. And, and these were the first of the plays where I saw myself and I saw myself

Jill Dossey of the San Diego Museum of Contemporary Art. With that, can you give us some insight into the art of Yolanda Lopez

How I loved what Leticia was sharing in bringing up, uh, Lopez’s exuberant performance in 1978 which was called Tableau Vivaan, which she again appeared as Guadalupe and Guadalupe here is both an athlete and a cultural producer. And, uh, it’s a series of photographs that document Lopez’s performance in which, you know, it’s kind of concept art that beats improv comedy and the political revolution because she’s wearing her shorts. UCS D. And she has a handful of paintbrushes, which are the tools of her trade. And she squeezes them like a bouquet, or she holds them up like a trophy. And you really have that contagious sense of exuberance that defines many of his works. And in her most, uh, most iconic work, which is the artist’s oil pastel portrait is the Virgin of Guadalupe, you know, in which she portrays herself as Guadalupe and in running shoes, leaping on a black crescent moon.

And, and Guadalupe is a star model. Mantle fidgets behind her and she smiles broadly. And, you know, there’s that feeling of challenge, of joy, and a kind of almost rebellious joy. And if we think of, you know, the Virgin of Guadalupe as a figure that was, you know, both that kind of lofty, unrealistic view of femininity, uh, you know, one of the associated with, uh, uh, his own pain and heartache, I think we understand why Lopez’s selfies were, you know, so popular and so loved and inspired, you know, so many other iterations of the picture. So,

Um, the works you include in this exhibit are from the 1970s and 1980s, why those years, and what was Lopez’s backdrop, so

Our exhibition explores a period of around a decade in Lopez’s production. It was an incredibly transformative time when she returned to San Diego in the early 1970s, after a decade in San Francisco, a time in which she became, you know, an artist and activist of immense magnitude. stature within the Chicano civil rights movement. Uh, so she came back to San Diego to finish her studies first in the state of San Diego, where she obtained her bachelor’s degree, then in 1975, she entered the visual arts department at UC San Diego. And it’s that period in which she, you know, really through her embrace of chicana feminism produces this body of feminist work that investigates and reinvents representations of women in Chicanex culture and society at large. And so, you know, during that time she produced a lot of her most iconic and beloved works. We have over 50 large-scale paintings, collages, photographs and drawings in the exhibition. And many that will be well known and others that have never been exhibited before. Um, the show runs until the late 1980s when she concluded her famous Guadalupe series. And by then he had returned to San Francisco. And so it’s that kind of, you know, very, it’s, it’s really a collection of, of his work of, of that time.

Much has been said about the respect that Lopez received during his lifetime in San Diego, as well as the role of women in the history of Chicana, in their region. This is Alessandra Moctezuma, gallery director and professor of museum studies at San Diego Mesa College, who also teaches Chicano art and teaches Lopez’s work.

One of the most important things I took away from Yolanda’s work was how she challenged, uh, the whole concept of patriarchy. And it wasn’t just in terms of American patriarchy, but also in terms of Latina and Chicana artists. She’s met a lot of resistance sometimes from, you know, men that you can performers. This is well documented. There’s a documentary on Chicano Park, where there’s a whole section where she talks about how difficult it was, you know, to get to paint the murals and how she supported a group of young women who wanted to paint in Chicano Park.

Jill, what do we know about Lopez’s activism and how she incorporated it into her art?

Thus, Lopez has roots in political activism which were the basis of his artistic practice and which have preserved it throughout his career. She had moved to San Francisco in the early 1960s and in 1966, enrolled in San Francisco State College, now San Francisco State University, at a time of historic activism on campus and groups of students were mobilizing in response to the Vietnam War. as for, you know, systemic racism in college. And she was part of, uh, the five-month strike at SFSU that, uh, shut down the university and resulted in the establishment of departments of ethnic studies and black studies. And, you know, in the late 1960s she was part of the biggest Chicano civil rights movement. And so when she comes back to San Diego in the early ’70s, she truly is an extraordinarily accomplished artist and activist. And I just want to point out how parallel that is, you know, that his work as an activist and artist parallels the movements of our time and, uh, and really, you know, paved the way for those movements.

And me, I asked Leticia Gomez Franco, if you’re going to end up with Lopez it’s life without much museum recognition until now, it’s a symptom of Lopez’s priority to be in the community of to be an activist, or if it is a symptom of, of greater systemic and institutional oppression. And here’s what she said.

Beware of institutions, isn’t there Chicano DNA, wanting to make things accessible to the community and wanting to decentralize things so that they, uh, challenge us on a daily basis, I think that’s is a big part of who we are as a community, but that doesn’t mean you don’t need to have a seat at this table. Uh, and within institutions and, and within America’s greatest cultural canon. So it’s disappointing to think that, that we are now, you know, everyone now hears about Yolanda Lopez has a grateful job at the MCAC for giving her that space. Yes,

This is the first time that the art museum has reopened its stores since the pandemic. This is a long shutdown, and of course, so much has changed in the past year and a half. How does the museum deal with a changed audience and a changed art world?

So it was a time for us to do a lot of soul-searching as an institution. We talk a lot about, you know, how we can be a more visitor-centric institution, a more welcoming museum, uh, where the public can come and, you know, see themselves reflected. And I hope that’s, you know, that’s what can happen. Uh, with the Yolanda Lopez portrait of the artist exhibition

It was Jill Dawsey, curator at the Museum of Contemporary Arts in San Diego, speaking with KPBS as Julia Dixon Evans, You’re Going to Land, A Portrait of Lopez by the Artist opens Saturday at the MC a S D.

“Tootsie” will run through Saturday at Shea’s Performing Arts Center