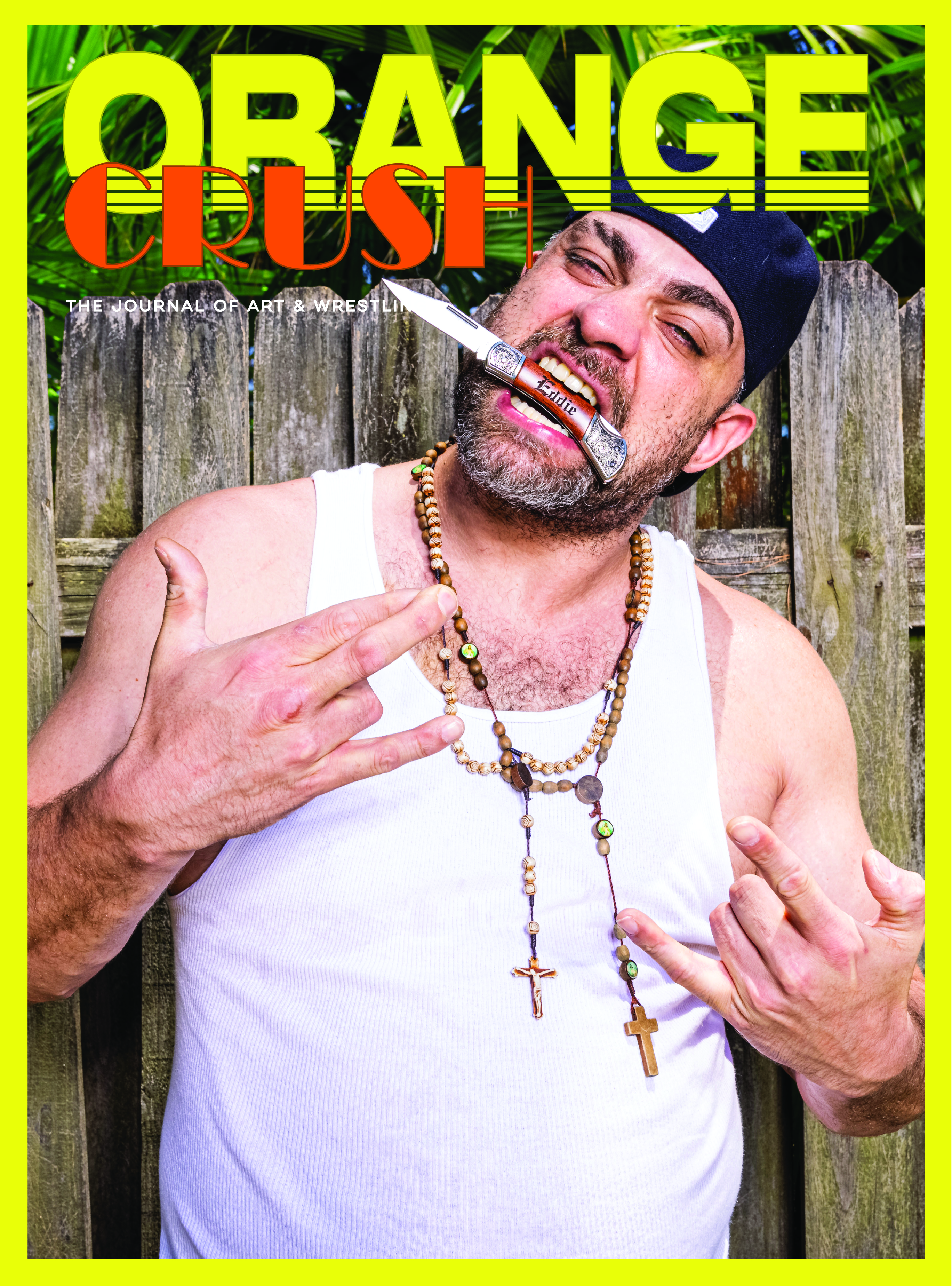 Despite barely being accepted as an art form for much of its existence, the artistry of pro wrestling is pretty obvious even to non-fans. Maybe you’ve only been exposed to glimpses of mainstream TV wrestling or seen GIFs of wild high-flying stunts on your Twitter timeline, but its existence as a unique type of performance art is perhaps more accepted than ever: melodrama and pageantry, spectacle and storytelling, not to mention the incredible physical skill involved. After all, this is a world in which business is sometimes described as ‘colour’, literalizing the human body as a form of material support akin to paint or oil.

Even though wrestling has often been seen as an art by the public, that’s not how its history has been presented, and that’s often not how the wrestling industry itself has thought of its product. For Adam Abdalla, the creator of Orange Crush, a beautiful and detailed annual publication billed as “The Journal of Art and Wrestling,” professional wrestling has always offered a unique creative outlet, for performers and fans alike. Each issue of the magazine featured intimate profiles and dramatic portraits of wrestlers, captured simultaneously in their most intimate and iconic form: current AEW and former WWE Superstar. Jon Moxley, sucking on a cigarette and dripping with his own sweat and blood after a match; death struggle maverick Joey Janela assault and turn off the camera.

The recently published third issue of Orange Crush features three alternate cover photos, each of hardworking independent wrestlers who have become TV stars thanks to the emerging AEW, which mounted the first major cable challenge to WWE’s tight monopoly on mainstream professional wrestling in close 20 years old. The three variants are like the artistic equivalent of a set of wrestling cards or miniatures. You can collect Eddie Kingstonthe brave New York brawler with a heart of gold; Thunder Rosa, a Mexican-born, Texas-based MMA-influenced fighter who is making history with her hardcore women’s matches in AEW; Where orange cassidythe slyly comical slacker wrestler who fights with his hands in his pockets and comes out on “Where is My Mind?” pixies.

Orange Crushstunning prints and colorful spreads – all of which are the product of creative director Susan Globus-Abdalla, who handles the visual side while her husband handles the editorial — delivers a more serious and thoughtful presentation than wrestling often receives. It is not just a gallery of wrestlers themselves, but a platform for under-recognized workers and artists who have made essential contributions to wrestling culture but are not wrestlers themselves. Each issue is a living showcase of the photographers and illustrators whose images are so essential to capturing wrestlers as iconic and larger than life, featuring the work of current photographers like ryan loco and Brain teaseras well as photographers from the wrestling past like Neapolitan Georgelegendary photography from the boom years of American professional wrestling, and Avery Danzigerwho captured black and white masked luchadores.

This wrestling – and independent wrestling in particular – inspires so many people who aren’t wrestlers to create their own art in a variety of mediums is, in of Abdallah eyes, testimony to the inventiveness and imagination of the wrestlers themselves. As he described in a conversation with Observer, “Artists are the best problem solvers in the world. Wrestlers are artists, but their creativity is stifled by corporate television, and they can’t quite solve those creative problems. Indie wrestling is where they can really craft their process and take risks, and see that inventiveness has an effect on the unique community of fans around it. Compared to big-budget WWE and AEW productions, the intimacy and unpredictability of indie wrestling is like the sheer energy of a rough sketch versus an oil painting on a wall. of gallery, the stream of consciousness of a first draft versus a final edit, the frantic improvisation and unpredictability of an open mic versus the perfect timing of a TV special

As much as it is a document of the living history of wrestling and its most creative rising stars, Orange Crush is an archive, preserving a record of a past that often goes unwritten. “Tome, Orange Crush is a newspaper, not journalistic. It looks more like a time capsule than just a wrestling magazine. Growing up in Sunset Park, Adam went to local indie wrestling shows in church basements and gymnasiums. Adam has been making a name for himself day by day — or what those in the wrestling business call a “shooting job,” “shooting” being wrestling’s insider term for the real and the improvised — as one of the most accomplished arts publicists working today and the founder and chairman of the PR Cultural Council. The gallery world may have occupied most of his time, but the squared circle was never far from his mind. “When I traveled, I tried to adapt to wrestling where I could. When I went to Hong Kong for gallery openings, I try to stop over in Japan to go to the shows of NJPW (New Japan Pro Wrestling, one of the most legendary wrestling promotions in the country) or Korakuen Hall. When I’m in Mexico, I always have to go to the local lucha libre promotions. Throughout his journey in the art world, Adam’s has also kept a personal list of visual artists who have worked on wrestling or who overlap with it in some way, or who are low-key wrestling fans themselves.

That there are so many unexplored intersections between the worlds of professional wrestling and visual art shouldn’t really be so unexpected, given that both forms are so often fascinated by movement and the human form – Andy Warhol even showed backstage alongside Hulk Hogan and Mr. T at the first WrestleMania. The latest issue of Orange Crush features an unexpected profile from Matthew Barney on his teenage career as an amateur wrestler and his fascination with anatomy – although Barney may not be familiar with Eddie Kingston or Orange Cassidy and he’s not that who you would call a professional wrestling fan, his work is engaged and informed by a culture of body sculpting and physical aesthetics that clearly interacts with wrestling. Issue 3 also features profiles of Mark Yangstriking portraits of naked wrestling men, as well as painter Helen HunterPerformances of joshi, Japanese women’s wrestling.

As Adam Abdalla began Orange Crush More from the pro wrestling periphery, the post was originally going to be tied to live events before the pandemic canceled initial plans. Now that wrestling in the flesh has returned, Abdalla’s work has expanded to promoting actual wrestling: Orange Crush is the official co-presenter of all New York shows hosted by Game Changer Wrestling (GCW), the hottest independent wrestling company in the United States, and now also runs Jersey Championship Wrestling, a kind of fraternal promotion to the Jersey-born GCW. In January of this year, GCW and Orange Crush earned a place in wrestling history with a massive show at Manhattan’s iconic Hammerstein Ballroom, the first wrestling show on the site since 2019, which sold out even before matches were announced. The night before, Orange Crush & GCW presented the first-ever induction ceremony of the Independent Wrestling Hall of Fame, which paid homage to the type of unsung but endlessly influential wrestlers who will never get glossy streaming documentaries about their lives. This year’s inductees included Homicide, a Bed-Stuy native and hard-hitting fighter; women’s wrestling pioneer Lufisto and wrestling promoter and commentator Dave Prazak. The Indie Wrestling Hall of Fame and GCW shows are just another demonstration of Orange Crushthe commitment to write a new story while preserving what preceded it. Abdalla sees the two sides of his accidental wrestling career as linked: “Promoting shows is kind of an extension of my editing job. With both projects, I’m trying to give these artists a space to express their creativity and unique talents in a way you don’t see on TV.