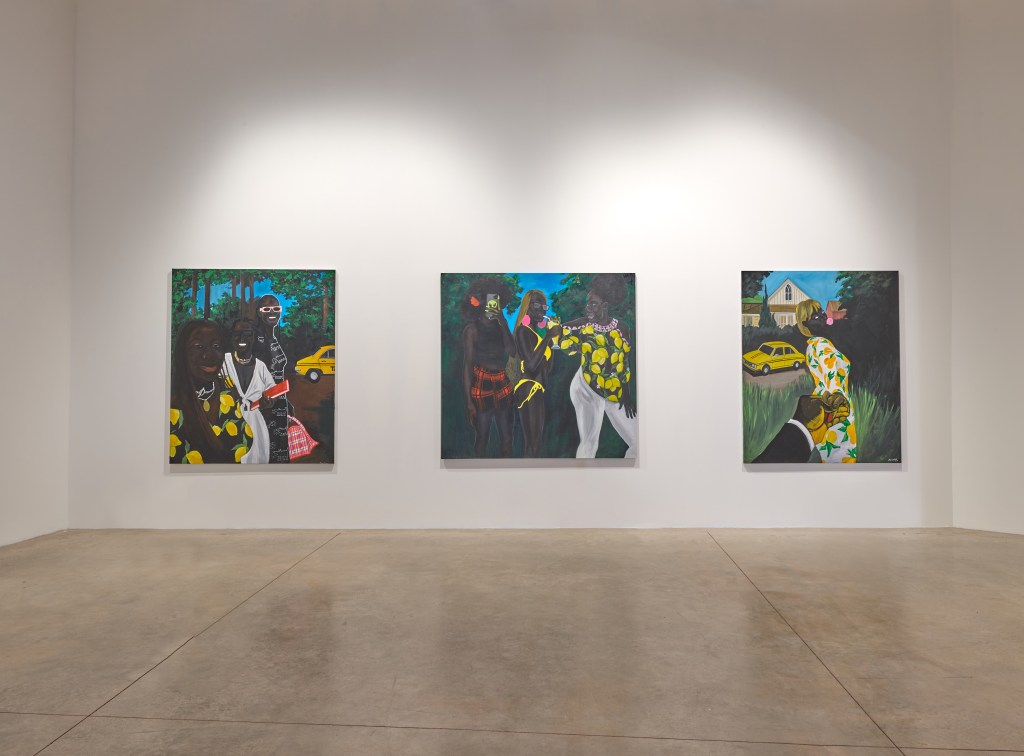 “A Loop in Time” by John Madu gives a context to the contemporary at the Zidoun-Bossuyt gallery – ARTnews.com

Multidisciplinary artist John Madu is an exciting voice who exemplifies the vibrancy and cultural plurality of his hometown, the burgeoning international arts center of Lagos, Nigeria. Her practice examines the complexity of individual identity and represents moments in history or personal experience through portraits and figurative figures. The artist brings his subjects, who are often striking in their complexion and stature, in and out of the home by framing or obscuring their bodies with pops of bright color. Madu works in a variety of mediums, including collage, ink, and mixed media, but gravitates towards acrylic and oil paints; He is also particularly interested in the textural effects achieved by incorporating different materials, such as burlap and other fabrics, into his paintings.

“A Loop in Time”, Madu’s last exhibition and her first solo exhibition at Zidoun-Bossuyt Gallery in Luxembourg, crystallizes many salient elements of its visual language and distills some of its recurring thematic ideas to their most basic level. According to the artist, the exhibition focuses on “the reinterpretation of the narratives of history to integrate them into contemporary discourse concerning social and political debates”. This is evidenced by the particularly transparent references which not only reinforce the allegorical foundations of the works but also make them one of the artist’s most accessible collections to date.

Self-taught from a young age, Madu was very early inspired by reading art history and biographies, and channeled his youthful imagination into the creation of comics and clay sculptures. He began painting professionally two years after graduating with a bachelor’s degree in political and strategic studies, and credits his technical training with honing a sense of conceptual rigor that forms the core of his artistic process. Despite Madu’s exhaustive and iterative approach to developing his ideas, his mature inspirations are as broad and evocative as his childhood muses, drawing on the aesthetic influences of functional art and fashion, as well as the sampling of images from the history of art, African history and culture.

Madu’s art, rich in heady symbolism and allegory, is also constantly electrified by a sense of humor reinforced by familiar iconography that underscores its social and political tenor. Her work has appeared in solo and group exhibitions in Nigeria and in prestigious international venues such as the Copeland and Hoxton Arches galleries in London; One Art Space Gallery in New York; and at the Tokyo and Shanghai art fairs. In addition, his ease with the vernacular of pop culture has made him a collaborator of choice for international brands such as Diesel and Bombay Sapphire. The paintings in this exhibition draw particularly on Madu’s signature palette. The murky backgrounds soften the outlines of the artist’s characteristic dark-skinned figures, accentuating the contrast between the subjects and their brightly colored clothing. This is the case in Judgment of Paris (we are the gifts), 2021, which depicts three women dressed in colorful clothing standing against a deep leafy green background separated by a cerulean sky rock. In a nod to Peter Paul Rubens’ representations of the Greek myth of the golden apple, Madu illustrates competing presentations of female beauty, illustrated by the contrasting sartorial fashions of women. Subverting the expectation of the myth, however, the characters are visually unified by the closeness and vivid colors shared in their clothing, suggesting mutual empowerment rather than opposition.

Color and formal references play a similar role in Maleek: Skin and Stereotypes II, 2021. The subject of the painting, with a wide mouth and gnarled fingers, adopts the same pose as the main character in Goya’s work. Saturn devouring his son; but Madu’s reinterpretation swaps the unfortunate offspring of the source material for a slice of watermelon. Here again, the background is so dark that it covers the shirtless figure, drawing visual attention to the fluorescent reds and greens of the subject’s fruits and clothing. The article pokes fun at 19th-century American posters defaming emancipated black Americans by repeating their racist iconography in an attempt to reverse negative cultural symbols, not by obscuring them, but by distinguishing them.

Although the works in this exhibition adhere primarily to the acrylic medium, Madu’s penchant for materiality remains evident in his meticulous rendering of two-dimensional fabrics. He takes particular care to recreate the textures and patterns of the clothes, highlighting their implications in terms of gender, social class and origin, thus accentuating the juxtaposition between the cultural connotations of these fabrics and the figures they adorn.

Nowhere is this more effective than in Not this time the invader VII, 2021, which represents two characters locked in battle. In a sylvan setting which is reminiscent of that of Judgment of Paris, the protagonist wielding the lightsaber of the painting looms, after the coup de grace, on the eyeless silhouette of a colonial soldier in free fall, a recurring character in Madu’s work. Sporting a flat hairstyle and mid-thigh stockings apparently sporting the Star wars logo, the hero is athletic and triumphant, asserting male dominance, but their pink nails, trimmed blouse and Ankara fabric skirt are decidedly feminine.

The victorious pose and physical androgyny suggest the triumph of a new individual and cultural identity that embodies gender equality and multiculturalism over that of another faceless colonial oppressor. Yet in the lower left corner of the painting, a mahogany-hued figurine, conspicuously resembling a work of African folk art, appears just within reach of the fallen soldier. Has the artifact been freed from the grip of the antagonist, asking him to return to the protagonist? Or is he doomed to fall out of the box with the Red Coat, suggesting that the loss of his culture is the price to pay to reclaim power?

A body of work so full of contemporary references could time stamp a less skilled artist than Madu; instead, opening up questions such as these situates her work on a continuum, which seeks to recursively engage with personal, cultural, and art-centric stories while trying to define a place. within it. â€œA Loop in Timeâ€ signifies a clear articulation of Madu’s thesis, marked by an aesthetic precision and finesse that allows his distinct point of view and his universal messages to resonate unhindered.

John Madu is represented exclusively by the Zidoun-Bossuyt gallery.

“A loop in timeÂ»Runs until December 24, 2021, at Zidoun-Bossuyt Gallery in Luxembourg.